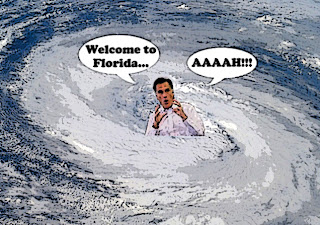 Golly. I've spent the last two days sacrificing one shrimp after the other on the barbie. To the eternal glory of the angry weather god Lord Mo Mo.

Hoping that the Big Mo might nudge Hurricane Isaac, in the general direction of Mitt Romney and the Republican convention.

And so far, so good.

Tropical Storm Isaac menaced the U.S. presidential election campaign on Sunday, forcing Republicans to make changes to their national convention in Tampa, Florida, where party officials scrambled to make sure candidate Mitt Romney's message to voters does not get blown off course.

Especially since Isaac doesn't have to blow the roof off the convention centre, to cause a PR disaster.

Epstein says he “can forsee a scenario where the storm intensifies to a major hurricane, category 3 or higher and slams into the Gulf Coast.”

“Imagine the visuals of homes destroyed and peoples lives ruined while the Republicans are having their convention...”

At a time when the leaders of Grand Old Bigot party are already struggling to cope with this PR catastrophe.

Republican National Party chair Reince Priebus says that Todd Akin's insistence on staying in the Missouri Senate race could cost the party its chance to win control of the Senate.

Akin has apologized repeatedly for comments made a week ago that pregnancy in a "legitimate rape" is rare because the female body tries "to shut that whole thing down."

By spanking the creepy Akin, for saying what they think.

I don't understand why Republicans are piling on Akin. He simply said what other Republican leaders have been thinking and saying for years.

Akin is them. They are Akin. Hypocritical voices are calling for the congressman, who won his primary, to quit. He's more dangerous to them than anyone else. He exposes their values in a way that most of us can't accept. Rape is rape. A woman shouldn't be forced by her government to have a child -- it's so Handmaid's Tale.

Only to have the MSM shine a light into the dark orifice of the Republican platform. Finally. And discover that it reads like it was written by Akin himself.

Oh boy. They say Mitt Romney was hoping to get a "bounce" out of this convention. But if so may I suggest he line his Magic Mormon Pyjamas with at least six inches of rubber. Because it's going to be a hard landing.

At a time when the winner of the American election could determine the fate of the planet.

Except thank you Lord Mo Mo.

Please blow those crazy misogynists, homophobes, and racists, back to the 14th Century where they belong.

And Toddy, you pervert.

maybe the hurrican is god's way of telling the republicans to go home & forget about it all.

maybe its god's way of punishing the republicans for being such a hate filled, unsympathic, anti human being group.

I don't know why they would plan a convention during hurricane season. For that along I wouldn't want them governing anything. If they can't plan their convention to be at a better time, how are they going to plan the country.

If the hurricane hits Tampa its proof GOD exists. So many atheists prayers comming true.

My favourite line re the Repug convention/hurricane thing came from Letterman (believe it or not!) who said that "..Hurricane Isaac is proof that God is a woman..."

hi Montreal nightlife... yes, it sure puts things into perspective doesn't it? I must admit that the sight of the bourgeois Marois masquerading as a progressive fills me with apprehension, but it's nothing compared to the nightmare of Amerika...

hi e.a.f...since thereligious bigots in the Republican Party are always blaming natural disasters on their enemies i.e. Obama and the gays, I'd sure like to see how they explain this one.
But of course, you ask a very good question. Why would they hold a convention in Tampa at the start of the hurricane season? And what else would they do wrong? If they become the American government we're all in terrible trouble....

hi Steve...actually I see that the Christianists are claiming it was due to their prayers that the hurricane missed Tampa. And it's not their fault if he loves them better than he loves New Orleans. God help us these people scare me....

hi Wendi...that is a good one. I wouldn't be surprised if the sight of all those cretinous misognynists has Mother Nature extremely annoyed. And may I just say: go Mother GO !!!!! ;)