The Pipeline and the Terrorist Menace 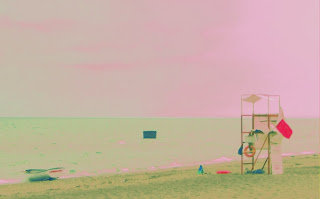 Some days this summer its been too hot to go to the beach.

And when I do go, and I lie there on the baking sand, I can't help thinking of the sun as the enemy.

Burning the life out of the planet.

The four-year-long drought that affected western Canada and the U.S. at the turn of the century was the worst to hit the region in 800 years, say scientists who warn that dry spell was nothing compared to the “megadroughts” still to come.

But of course the sun is just the sun. And one only has to look at the comments about that story, to understand that we are the planet's biggest enemy:

Its' amazing how man can cause global warming, yet can't heat his house in the winter. Something doesn't add up. These are no more than new approaches to sell the same old bogus hype. Water covers two thirds of the earth and we haven't been able to pin that on Noah yet. Maybe it just isn't man's fault?

With our burning ignorance, our capacity for denial, and our greedy economic system that would put money before survival.

Even though protecting the planet for future generations is our most sacred responsibility, and failing to do so would be the greatest crime in human history.

But don't tell that to the RCMP eh? Because they seem to think that those who would defend the land, are a terrorist menace.

“The Canadian law enforcement and security intelligence community have noted a growing radicalized environmentalist faction within Canadian society that is opposed to Canada’s energy sector policies,” says the report.

“Tactics employed by activist groups are intended to intimidate and have the potential to escalate to violence.”

Which makes me wonder will they also call these people terrorists?

“Our people are prepared to go to the wall against this. There is no doubt about that,” warned Grand Chief Phillip, president of the Union of B.C. Indian Chiefs. “There is absolutely no way we will tolerate a project that would violate the environmental integrity of our traditional territories along the pipeline route and along the B.C. coast.”

And what will they call bloggers and others who stand with them? Terrorist supporters?

Because if so I better plead guilty already eh? For although I am a peaceful, gentle person, I will not be intimidated by Big Oil, the RCMP, or the Harper Cons, I'm not afraid of ANYONE.

And I will not  look on silently as our beautiful planet is turned into a desert, racked by mass starvation and water wars. Or condemn the children of today and tomorrow to live in a scorched wasteland.

But the RCMP is right about something. If there is no change, there will be trouble from those who will inherit the nightmare.

For this too is true.

When will we know, what we should see?

One of the best ways to make sure things change on this planet, if it isn't too late already, is to get the young voters off their asses and to the polls to vote these fascist bastards out of office. Voting con OR liberal is the same. THERE IS NO DIFFERENCE ANYMORE! They are both the american neo-con, ultra right wing thugs that have destroyed the u.s. and are now working on the rest of the world. REMEMBER: IF YOU DON'T VOTE THEM OUT OF OFFICE, DON'T BITCH ABOUT THEM! YOU HAVEN'T EARNED THE RIGHT TO BITCH ABOUT THEM IF YOU SIT AT HOME ON VOTING DAY AND WHINE ABOUT HOW "IT WON'T MAKE A DIFFERENCE ANYWAY"!

I was really relieved when Grand Chief Phillip finally made that statement..I get tired of polls about Crusty Clark's statements re dirty oil money, and BC getting our fair share..there is no such thing as fairness when it comes to this pipeline proposal, and we shall not be moved when it comes to allowing the damn thing under any circumstances, no pay, no day, no way!

Thank you Simon, for your wonderful posts here and for the support you show the 80% of BC that stand with Grand Chief Phillip, despite the fact that the MSM ignores this fact.

There is a global shortage of food, right now. Weather pattern extremes are bizarre, more frequent and more deadly.

The dirty Alberta tar sands, have the potential to destroy this entire planet. Harper knows damned well, burning fossil fuels, is killing this planet. However with Harper, his horrifying greed comes first. So horrifying, he is willing to sell control of the tar sands, to Communist China.

The BC citizens know, Oliver and Harper are referring to the BC citizens, as the terrorists. We have been threatened with anti-terrorist squads. Well, Harper can bring his entire Communist China army over here. We will not change our minds.

Don't forget, Anon 5:40. There are politicians, who cheat to win. Ex BC Liberal Premier Gordon Campbell, twice lied and cheated to win. After Harper's whopper of a lie, well over 3/4 of Canadians firmly believe Harper used the robo-call cheat to win the election.

80% of the BC citizens, are supporting the F.N. to save their food sources, from Harper and Premier Redford's greed.

hi Wendi...I thought it was about time that somebody in B.C. made that absolutely clear. This is not just about money, it's about protecting B.C. from an environmental catastrophe, and stopping global warming from torching the planet.
I know the Cons may find it hard to believe, but some things are more important than money...

hi anonymous...some Canadians think that all global warming will do is make palm trees sprout in the arctic circle. And that's a good thing because then we wouldn't have to go to Cuba eh? But actually its about famine, and political instability, and wars over oil and water.
The good news is that sooner or later people will begin to understand that threat, and the day they do Harper's rapacious oil policies will have to be revised, the day after he's expelled from office.
That day can't come soon enough...

hi anonymous...I'll have to check APTN out, but I'm not surprised. The Harper government calls their opponents radicals and extremists, and the RCMP is so mechanically minded, they are inclined to believe them. It's a very disturbing situation, and I fear it will only get worse...

hi Rick...thanks for the link. It's a good video. And when you see people like Rush Limbaugh solemnly declaring "it's actually cooling..." you really have to shake your head. What drives so many people to deny the obvious? Can't they see the risk? And why it might be better to err on the side of caution when the survival of humanity is at stake?
Gawd.The only answer I can think of is that there have always been people like them since the day we lived in caves.
"It's not a sabre tooth tiger !!!!!! It's a natural phenomenom !!!! AAAAAAAAHHH !!!!
The only difference is that back in those days the forces of nature culled their ranks, and now they are EVERYWHERE... ;)

hi Kim...I'm glad to support those who oppose the pipeline, because I know how beautiful B.C. is, and it's a great opportunity to slow down this mad rush to sell more and more oil, and start taking a very sober look at our future. Our survival demands it...

hi anonymous...I completely agree with you, in fact it's my most urgent priority, and a large part of the reason I'm still blogging. As for the choice of progressive voters, unless I can be convinced otherwise I only see the liberals as spoilers, so I would urge everybody to vote for the NDP, unless it's in the few ridings where only the Liberals can win...