Obama and the War of the Billionaires

When I watch this ad, I am reminded that the U.S. presidential election is now less than four months away.

And how the right-wing billionaire's club that paid for it is going all out to remove Obama from office.

With Big Oil passing around the cowboy hat.

Hours after being named an oil adviser to the Romney campaign, Harold Hamm of Continental Resources contributed $1 million of his $11 billion net worth to Restore Our Future. Charles and David Koch have pledged $395 million for the 2012 election cycle, which combined with Karl Rove's American Crossroads and Tom Donohue's U.S. Chamber of Commerce could produce a billion-dollar tidal wave of cash to wash Barack Obama out of the White House.

(As one Democratic consultant described the operation, "It's just like the Cold War. They're going to force Obama to spend himself into oblivion.")

And billionaires like casino mogul Sheldon Adelson prepared to spend almost any amount of money to see Obama defeated. 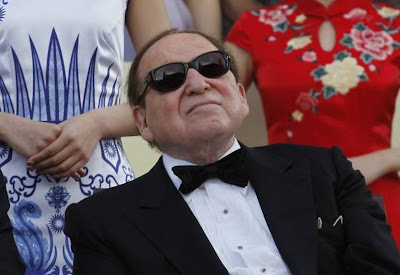 Adelson, this source continues, believes that “no price is too high” to protect the U.S. from what he sees as Obama’s “socialization” of America, as well as securing the safety of Israel. He added that Adelson, 78, considers this to be the most important election of his lifetime.

When I see what's happening to our neighbours, and what those capitalist pigs are trying to do to them,  I just hope that Canadians understand that this is also the most important U.S. election in OUR lifetime. And that we better hope that Obama wins.

For can you imagine what could happen to us if Romney wins? Living as we do in a country where Big Oil gives the Con regime its marching orders.

A country where there is no longer a proper border to protect us from those who would turn us into Amerika.

The Integrated Cross Border Law Enforcement Operations Act now makes it possible for American officers to cross the border into Canada where, as the act states, they have "the same power to enforce an act of Parliament as a member of the Royal Canadian Mounted Police."

This means they'll be armed and have the powers to arrest suspects in Canadian territory.

And if Romney wins there will be nothing to stop the Harper Cons from dragging us into a war with Iran, and a dark age of terrorism, repression, and economic misery.

Yup. Let's just hope that the good people of America can beat back Romney and his billionaire's club. And that progressive Canadians who live there, or near the border, will do all they can to help them. For their struggle is our struggle.

Hello America this is Simon. Hello Maine here I come !!

Can we do it neighbours? YES. WE. CAN.

Is anybody still alive out there?

And this is Radio Nowhere...

People are born with a brain, them might want to start using them. Not everything on t.v. is the truth.

It just amazes me when I see working class Americans out protesting about being covered by a medical plan. its o,k. for a billionaire not to have coverage, but an average person??????

It is truly hoped that Obama wins the election because I really don't want those republicans running the country which sits on our door step with a prime minister like stevie slime. At that point New Zealand will look so much better.

hi e.a.f....One of the most depressing things about America, is that these billionaires are able to convince so many poor people that Obama is the enemy, when he is trying to help them, and the billionaires are the ones who are trying to screw them. It's absolute madness, and I only hope that the good Americans can rise to the occasion and beat back those reactionaries....