Omar Khadr and the Invisible Kid

I love this UNICEF message. It's one of the best messages against bullying and violence against children I have ever seen.

But for some reason it also makes me think of our invisible kid, Omar Khadr. And makes me wonder who will protect him from the depravity of Vic Toews?

The Harper government has thrown up a fresh roadblock to repatriating convicted al-Qaeda terrorist and murderer Omar Khadr to Canada, saying Washington must first hand over videotapes of allegedly disturbing psychiatric interviews with the Guantanamo prisoner.

Dr. Welner, a New York psychiatrist for the prosecution, testified during the sentencing phase of Mr. Khadr’s trial that the Canadian poses grave risks if freed because he was a remorseless, unrepentant murderer regarded by radical jihadists as “al-Qaeda royalty” who could be expected to take a leadership role in the violent struggle to destroy Western civilization.

For who is this Dr Welner, the one Ezra Levant quotes extensively in his new and revolting book on Khadr? Read this and weep.

Or better still get angry at the loathsome Con zombie Toews, who is breaking a deal, catering to bigots, making a mockery of the law, threatening us ALL.

And with his indecent intentions.

Shaming us beyond belief in the eyes of the world...

For let's be clear, what was done to this Canadian child soldier will haunt us forever. And only by saving him, can we hope to save ourselves.

Enough is enough. Canada must keep its word — and Minister Toews must authorize Omar Khadr’s return without delay. A deal is a deal.

Romeo Dallaire is a decent Canadian. Vic Toews is a depraved monster. Ezra Levant is a freak of nature. The Cons are the scum of the earth. 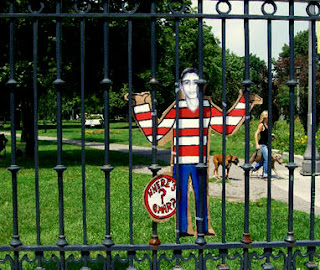 Stevie slime & Vickie scare me a hell of lot more than Omar Khadr ever will. He was just a kid who got a raw deal from the powers that be.

I do not consider Omar Khadr a safety risk. I consider him a Canadian & as such he has every right to come home to Canada.

I don't know the shrink who wrote the evaluation but I do know it was paid for by people who do not have Mr. Khadr's best interests at heart. Who cares whats in the document. It doesn't count. Mr. Khadr is a Canadian & as such has the right to come home. What exactly is Canada going to do if he shows up at the Windsor port of entry?

It's sad that the riding which once elected Louis Riel is now giving Ottawa a jerkass like Vic Toews.

hi e.a.f...as you can read in the Kay article Dr Welder is a very controversial psychiatrist, the inventor of the scientifically dubious Depravity Scale, and he only met with Khadr for about an hour.
Also, every guard who has met Khadr has described him as a decent kid, not a Jihadist, who just wants a chance for a normal life.
Even if he was a bad guy, I would want him here, because he was a child soldier and we were the FIRST to sign the U.N. protocol on how they should be treated. But despite all he has endured he is not a bad guy, he's a good one, so all the more reason to bring him home immediately...

hi Analyst...thanks for that fact I wasn't aware of that. And it is sad isn't it? For Vic Toews hasn't a scrap of nobility in him. But then Riel will be remembered forever, and Toews will be forgotten sooner rather than later. It's a small consolation, but it's something...

The Kadhr family interviews come to mind for many people who are opposed to his release. They do not see him as a child, especially now that there is nothing child like about him. Many who oppose his release feel that his family and others who share his violent militancy are simply "using" the democratic process to gain his release. His own mother has expressed nothing but contempt for Canadian society, insisting that Omar was in Afghanistan because Canada was too morally corrupt. That and the fact that in most Islamic countries a reciprical arrangement would be inconceivable and laughable. It is this that prevents some from signing your petition or otherwise supporting your position.