Rob Ford: When the Bigot is a Moron 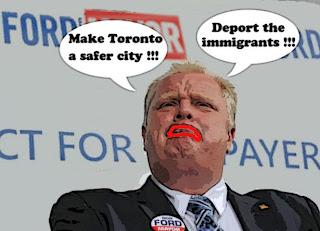 Damn. I've been trying to think of something nice to say about Rob Ford for soooo long.

It's the kind of guy I am. Always looking for the good in people. Or the pony in the manure.

And besides after calling him an incompetent buffoon, a crass and vulgar redneck, and a pathetic bigot, I figure I owe him one eh?

But it's no good. As hard as I try, I just can't put lipstick on a Con like that one.

But what I can do from now on, is call him Mayor Moron.

For surely anyone who reads the transcript of that interview, must come to the conclusion that Rob Ford is too dumb to be Mayor of a city as big as Toronto.

DOWNS: When did you ever deal with Immigration and Citizenship?

FORD: Well - any time. If you’re having problems in another country, they try to look at your status. I’m saying -

FORD: Okay. Whoever it may be. That’s what I’m saying: maybe I’m not an expert on the ministries. But all I’m saying is, if it’s Foreign Affairs or if it’s Immigration and Citizenship, I want to talk to the PMO and find out, if we can - maybe we can’t - but I’m just trying to clarify that if you’re caught with a gun and convicted of a gun crime, I do not want you living in the city anymore. And to find out that information you have to go through the PMO, and that’s what I’m doing. I’m not an expert in this but I am trying to resolve the issue that’s at hand.

Or any city for that matter. For he's so incredibly stunningly stupid he straddles the boundary between being fed and being watered... 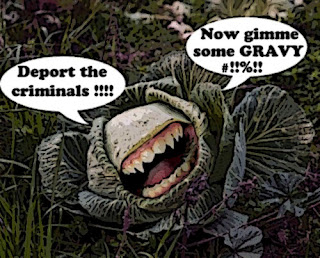 And should be removed from office, by whatever legal means necessary, as soon as is humanly possible.

Which of course is exactly the way I also feel about Jason Kenney. Who attached himself to Ford's ample behind, like a barnacle.

And made an idiot out of himself. Again.

While appealing to the lowest instincts of the Con base, who are spewing racist comments all over the internet.

But then why should we be surprised eh? When both men have profited handsomely from bigotry. Kenney's career was built on the rotting foundations of homophobia and xenophobia. And Ford was elected after vowing to keep the Tamil boat people from settling in Toronto.

Ford’s failures especially hurt in a time of crisis, when residents look to their city leaders for guidance. It’s a matter of public confidence. When innocent people are dying, and even children are being shot, Toronto needs someone firmly in charge. It needs clear direction and a mayor with a sound understanding of what’s to be done. Instead, it has Ford — fumbling and flailing about — demonstrating only unrelieved ignorance and monumental insensitivity.

Who said you don't get what you deserve?

Who the hell ever said, you can't put lipstick on a moron? 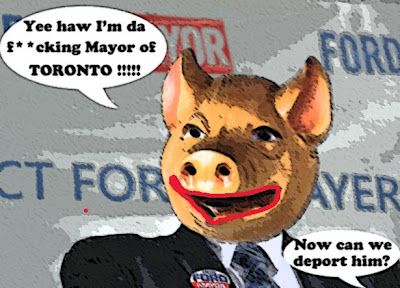 Ford is more to be pitied than reviled.
The ones who need revilement are those who voted for him and the candidates of the left in the last election. They couldn't agree among themselves who would best carry the election to victory and that means that the split left vote brought Ford to power. That's the same tactic has Harper has used for several years.

Since the new year, many of his plans for the city have come to naught and have been overturned in many cases and for that reason, he's been in re-election mode.

Even the commenters on the Toronto Sun's pages have little sympathy for him. He is well and truly finished as a politician and all one now need to do is put an apple in his mouth and serve him up as roast suckling pig, which you do so admirably.

He's done like dinner and he has to serve out his term for the next 2 1/2 years as a lame duck.

That's the price he pays for destroying Miller's
leagcy.

What will Rob Ford's legacy be? After all even Mel Lastman brought us the Dine Safe restaurant and food handling notice system.

By the way, I don't use the term mayor and the name Ford in the same sentence. He doesn't deserve the dignity that comes with the title.

I do the same thing to Stephen Harper.

Am I angry? Yes, and many of us will work harder to get him out of the chair and politics altogether come 2014.

Scrooge said Bah! I say Bah! to Ford and his CFRB lackeys.

Hi Simon, Funny thing, I was challenged by a friend last week to say something positive about Ford and Harper. I told him I'd get back to him on that,still haven't lol

BTW All racists are morons, it is their inability to reason that leads them down that path

As an ex-pat Upper Canadian I sadly (somewhat gleefully) wish to point out the fact of the many morons who voted for this very well known, municipal political entity. Torontonians need look no further than the goddamn mirror and blame NO ONE, but themselves for this idiotic tragedy.

We must ask ourselved why 46 percent of voting Torontonians supported Rob Ford. Let's not state that they were stupid. Otherwise, we won't understand how to get them to support another mayoral candidate in the next municipal election.

I do think that the voters had a love-hate relationship with David Miller. He had an environmental mission for the city of Toronto. He also brought more user-fees so that property taxes could be kept low--especially for people living in the high priced downtown and mid-town Toronto. His downfall was the garbage strike which infuriated many residents for placing emergency dumps in residential parks and for not getting an injunction to limit picketing actions by those striking. He was able come to a setttlement with the unions. This infuriated some voters as the settlement appeared to be too rich for the unions and too poor for the city. David Miller knew that he did not have a chance in winning the re-election as mayor. Instead, his proxy, Joe Pantalone, ran as the reincarnation of David Miller. Mr. Pantalone didn't do very well. Rob Ford won 46% of the votes. He had strong support in the suburbs from voters paying increasing service fees but not quite getting good service in the burbs.

Rob Ford will face mayoral challenges from people like Karen Stintz and Adam Vaughan. Ford may choose to run a divide-and-conquer strategy against Ms. Stintz and Mr. Vaughan. Ford may state that he is running against the downtowners who wish to impose their values on the hard-working suburbanite taxpayers. Mr. Vaughan is quite intelligent. However, he has not made very many connections with suburban voters. Ms. Stintz may perform better against Ford.

Meanwhile, I'll be part of the Freemen guarding the international border between Ford's Toronto and the rest of Canada. I'll be standing on the south side of Steeles Avenue making sure the crazies do not enter Ford's Shangri-la.

Looking for the pony in the manure has got to be one of my favourites, Simon. Followed by straddling the boundaries between being fed and being watered.

Ford, fix or repair daily. I just hope they find a good mechanic or doctor for the man. Of course the voters of Toronto have only themselves to blame.

We may have Mayor Moonbeam in Vancouver but he is light years ahead of Ford. Ford would appear to have no understanding of the Canadian consititution, how to deal with an emergency but certainly is good at blaming the victim.

A pathetic mayor of a pathetic city.

hi Torontonian...sometimes I actually do pity Ford, because he is so much out of its depth. But then I see what a ghastly bully he is, and how his ignorance is hurting Toronto, and I feel angry again. Mel Lastman was a buffoon, but at least he loved this city, while Ford only loves the suburbs, and doesn't understand what makes a great community. But yes, if it makes people work harder to get rid of him, some good may come of this nightmare...

hi Kev... I know what you mean. Although I do look for the sometimes elusive good in people, I have to admit that in Ford's case, I haven't been trying too hard... ;)

hi Steve...oh sure rub it in. I'm not even from this city and I'm embarrassed. ;)
But you're right, too many Torontonians let themselves be fooled by cheap slogans, and too many divided the progressive vote, and others didn't bother to vote period. So you do get what you deserve. Let's just hope that enough of them have learned their lesson...

hi skinny dipper...I'm not calling them all the people who voted for Ford stupid. I believe that too many of them let themselves be fooled by simplistic slogans,and you're right there was a backlash against David Miller for stuff like the garbage strike. There is also the great suburban/city divide, and the greed of those who would work and play in the city, but don't want to pay to keep it up, or make it a viable place for others to live in.
And then of course there is the political division. WE need to be able to choose a progressive candidate and rally around him or her.
Because dividing the progressive vote is, as it is at the federal level, absolutely disastrous...

hi Beijing...I've always been kidded about looking for that pony. Although I've found quite a few. Unfortunately the heap of manure in Harperland is bigger than Mount Everest, so I'm still looking.
As for watering the Fordzilla, it's a big job. But if somebody gives me a fire hose, I volunteer... ;)

hi e.a.f....compared to Ford your Mayor is terrific. I mean he makes Mel Lastman look good, and that's no mean task. It's so easy to laugh at him, but he's doing so much damage it's really a tragedy...

hi Way Way Up...don't be too hard on the city, because even though criticizing Toronto is a favourite sport of us Montrealers, I've become rather fond of Hogtown. Sometimes it drives me crazy, but it does deserve better...

The mayoral pickings in the last municipal election were extremely slim. At the end of the campaign, the top three candidates were Moe, Larry, and Curly from [i]The Three Stooges[/i]. I think Curly won.

I know. But growing up a two-hour drive away and seeing my home town over-run with yuppies and condescending folk tends to grate on me nerves.