Stephen Harper and the War on Government 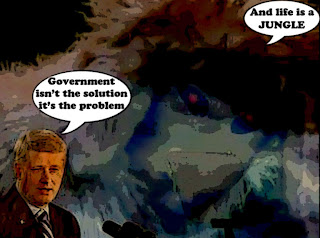 The thing that scares me the most about living in Harperland is how so many, who should know better, can't see the forest for the trees. Or the monsters who hide behind them.

So Nik Nanos can report that many Canadians have lost confidence in government.

Nik Nanos, the president of Nanos Research and the author behind the study, characterizes Canadians' views as a "bit of a limp handshake in terms of confidence" in government.

Without mentioning that's exactly what Stephen Harper wants. Because he doesn't want to improve government, he wants to DESTROY it.

His views on that are quite clear:

Which is why he is slowly strangling it, slashing jobs in the civil service, laying off scientists, border guards, and food inspectors. Why he always talks about government as a problem not a solution. The commie union thug conspiracy that would dare challenge his Big Oil buddies.

It explains why he is refusing to take a leadership role in the debate over the future of medicare. So he can make the federal government even less relevant to the real lives of Canadians. Even as he off loads costs onto the provinces hoping to bankrupt them into privatizing their health systems.

And why when his corrupt Cons are caught with their pants down in public. Fiddling with the truth.

Or making up the rules.

They always accuse the other parties of being as dirty as they are... 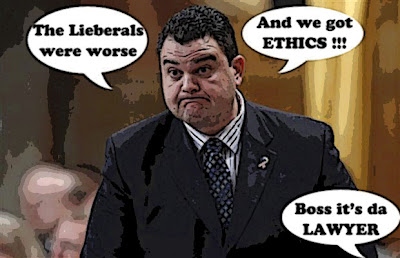 So Canadians come to think that all politicians are the same, and confidence in government plummets.

For Great Ugly Leader and his RepubliCon cult are so deranged with extremist ideology, they would drag government into the gutter, to more easily destroy it.

Or at least most of it. Because he does believe government has some role to play. Collecting taxes, providing stability for Big Business by removing any obstacles in its path, running Foreign Affairs, and above all providing security.

For in the jungle he would create, somebody will have to defend the rich from the wrath of the poor, the old and the hungry.

Oh boy. Stability and prosperity and the interests of Galactic Alberta.

Where did I hear that before?

Yup. Forget the trees. That's the dark forest, and the monster who hides in it.

Memo to Nik Nanos: Canadians will have confidence in government again.

The day the Cons are DEFEATED...

Another excellent post, Simon -- your writing and your ideas impress me so much.

I wonder if we'll get to see a reprise of "Hitler: the Last Ten Days" as Stevie's time approaches?

Harper hates everything Canadian, including the people.

Harper is using his dirty tactics, dirty politics again. William Corbett investigating the robo-call election cheat scam, suddenly resigned. In his place, Harper put one of his own boot licking boys, Yves Corte in Corbett's place. Corte is already lying and covering up for Harper. We all know how Harper was desperately trying to quash the investigation. So, looks like he is cheating again.

Same with the disputes of the ridings election results. Harper has appointed, two new Conservative judges. What are the odds, one of Harper's new judges, will hear the appeals?

I certainly hope the NDP are watching, that evil s.o.b. Harper.

We still hve 4 more yrs of this man. I do hope Canada survives it. He is selling most of it to China so it may not matter. We will just become annexed by China & live under their rules. they own the resources, they own the companies, they own the workers they will bring in.

China is developing social unrest. Those who aren't able to participate in the "new" China, which is most of the people & the 30 million men who will never find partners & only the children of the elite having a good chance at prosperity, it doesn't look good so I'd sugges the chinese government is looking for an annexation for safety. Hong Kong is too close & can be unruly at times. Wehave only to look back at the Hong Kong roits of the 60s./

hi Cathie...thanks so much. I'm just trying to focus on the big picture which sometimes gets lost in the 24-hour news cycle. Like most people I feel nothing but contempt for the barrage of bad legislation the Cons are inflicting upon us. But it's their larger objectives that bother me the most. When you put it all together it's the blueprint for a very different Canada, one that I will never accept...

hi Edstock...unfortunately the end won't be that dramatic. Just a tawdry shabby spectacle. With Great Ugly Leader shuffling off the stage claiming that Canada doesn't deserve him. And Toews and Kenney fleeing the country for missionary work in Paraguay. But hey, as long as it's The End I don't mind a bit... ;)

hi anonymous...I think you're right, Harper hates this country and the values that once made it great. But funnily enough I don't hate him, I just think he's a very small man, with a bitter twisted nature, and totally PATHETIC.
I just dream of the day we can evict him and his Cons from power, and make Canada great again...

hi e.a.f....tell me it's just three and a half years, or I might not make it. ;)
But yes I agree, putting our economic future in the hands of the Chinese Communist Party and the Koch brothers strikes me as the last thing we need. For they are both ruthless, they hate unions, and they would turn this country into a Banana Republic of Big Oil. I have a theory that Harper is just trying to screw Obama for delaying the Keystone pipeline. But if he doesn't watch it his little game could backfire badly, and we will all pay the price...