Stephen Harper and the Redneck Rodeo 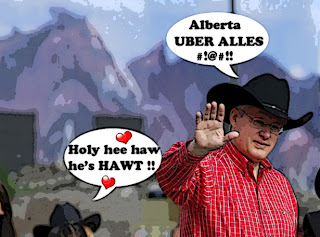 It's hard to imagine a more horrible or absurd sight, than Great Black Hat Leader at the Redneck Rodeo.

Or the sinister bandido Firewall Steve.

For the only thing worse or more ridiculous, would have been if he had galloped waddled down the street on the back of Dean Del Mastro. Shouting Dirty Oil is ETHICAL and so is my government  !!%#!!! 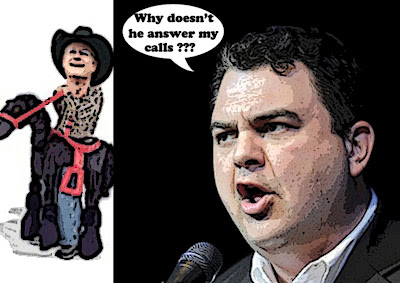 Leaving Great Leader to play his favourite role; the nerd cowboy from Toronto who's more Albertan than an Albertan. In front of a captive audience.

Harper made his first public appearance in Calgary Friday on a stage in front of a couple hundred of supporters who were let into the closed-off section by security officers after checking badges.

Before making a quick getaway.

So nobody could ask him embarrassing questions eh? Like is it true that he hardly knows Del Mastro, his parliamentary secretary? Is it because he loves Alberta so much that he doesn't care whether the Dutch Disease destroys jobs all over the country?

Does he also believe that we can adapt to global warming? Like his Big Oil buddies.

Does he still believe those eastern bastards should  freeze melt in the darkness?

And does he have any idea what people all over Canada are going to do to him in the next election? When it finally sinks in that his Con regime is not just killing good jobs. It's condemning their children to a fiery future. Just to make Alberta RICHER.

Yup. I think we can work with that eh? I think that picture of Stephen Harper in cowboy drag is going to come in VERY useful between now and the next election.

In the meantime, pity the poor people of British Columbia who are about to get a pipeline shoved up their ass whether they like it or not. For they are like calves whose necks must be broken.

Pity the people of the arctic who are about to have their way of life destroyed.

Pity the poor polar bears now homeless in their own land...

And then get angry about what the Cons are doing to our country..

For years Stephen Harper and his supporters in Alberta have waged war on Canada and the planet. But the day of reckoning will soon arrive.

It's getting really hot out there. The environment will become a bigger and bigger issue, which plays into the hands of Mulcair and the NDP. The Cons and their Big Oil buddies are on the wrong side of history.

And soon it will be OUR turn to declare war on them...

SOME Albertans might be getting rich.....lord knows, this one sure ain't.

Wait Montreal Simon I don't know how to download pic's on your website but excuse me that prick named Stephen harper is NOT from the west he is from Toronto where everyone HATES him as well as they do in Calgary AB Canada.

He is always protected by his phalanx of royal red coated ass-lickers...

It costs the rest of us $50.000 per day for this clap trap harper to get/move around

hi Way Way Up...I realize that all Albertans aren't rich. And I am aware that working conditions in places like Fort MacMurray aren't as good as people imagine they are. And will most likely get worse as the foreign interests who own the oil sands start to exert even more influence. But the fact is Albertans are as a group the richest people in Canada, and as it would anywhere, that can make people greedy and arrogant. My Canada includes Alberta, but I will only start celebrating it the day it stops being a one-party state...

hi Mogs...I thought I made that clear. Harper is a cowboy from Etobicoke, the same leafy stultifying suburb where Rob Ford lives. The West is bigger than Alberta, and of course I LOVE BC.... ;)

well, in fact, his family is from Moncton, New Brunswick. A fact he tries very hard to keep quiet

I live in BC now and the coal trains fueling china's war machine pass by an average of once every four hours. To the port of Vancouver to be delivered via tankers to Stephens chinese masters.

Now harper is gonna force the alberta bitumen pipeline across BC to another set of tankers in Kitamat to further enhance the chinese war machine, we have a red prime sinister minister.

"I thought I made that clear" from you above:)

No offense taken I just wanted you to know that outside of professor tom flanagan UofC who is a dual citizen i think cares much for him. The ones that did unfortunately voted along party lines, what a stupid decision that was?

Tom flanagan? "whom Ezra Levant credits as “the master strategist, the godfather, even of Harper" Link:http://www.veteranstoday.com/2012/04/05/fixing-elections-through-fraud/

Some sites are definitely more union friendly than others...but how long it will be until they are all insane is likely sooner than later. As for a one-party state, yup, getting tired of it. Although at least we have somewhat of an opposition this time. Granted it's Wildrose...hopefully they will argue themselves to death and people will see just how stupid and out of touch they BOTH are.

Hi Mogs....I should have added that Harper may be ready to do almost anything to build that pipeline to BC. But I strongly suspect the people of BC will do just about anything to stop it, so I'm putting my money on them.... ;)

hi anonymous...I think the Harper family should be proud to come from Moncton, but as for Moncton it's
trying very hard to keep that a secret... ;0

hi anonymous...thanks for that link, I quite enjoyed it. I have heard that one of his grandfathers disappeared and was believed to have committed suicide, so maybe that's what he's trying to cover-up. Of course, if I was him I'd be more concerned about the first Harper in Canada,Christopher Harper who had to be removed from office for, as one historian wrote, "violent and oppressive measures" - vindictive to a point beyond all reason.
For that sounds awfully familiar....