Speaking Truth to Power in Harperland 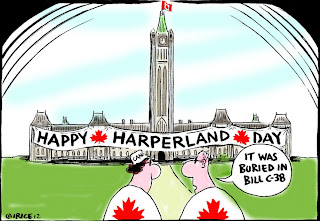 I think this cartoon in the Toronto Star neatly sums up what Stephen Harper did on Parliament Hill the other day.

Declaring outrageously that his Con regime was "caring and compassionate." Wading into a select crowd of admirers who greeted him like a rock star... 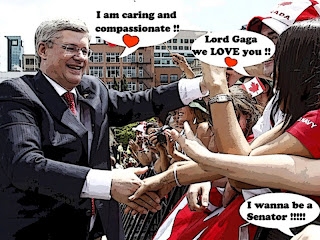 So he could make it look like he was enormously popular eh? Instead of sinking like a lead balloon.

“The major notable factor here is a pretty alarming for the government, decline in support,” EKOS president Frank Graves said. “They’ve lost over 11 points of support and to see a government that secured a majority under 30 points one year later, I think is pretty well unprecedented.”

While the RCMP prevented thousands of other Canadians from entering Parliament Hill, no doubt so the shameless photo-op could be better controlled.

Which I guess is why I find this picture so symbolic and so powerful. 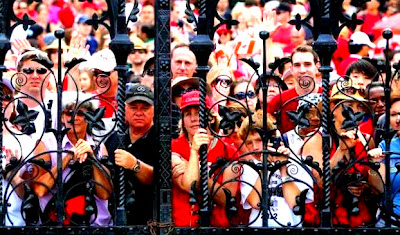 For what could better represent the existential horror of Harperland ? The bars of a prison state. A people locked out of their own Parliament. A Con regime that won't listen.

And why I'm glad that Lord Harper definitely heard this one.

“Stop Harper, stop Jean Charest,” the protester yelled in his outburst. “Citizens rise up. We need you, everybody.”

Although I wouldn't recommend doing it that way eh? At a time when scientists are being muzzled, and all dissent is slowly being smothered, shouting at Great Ugly Leader could be dangerous, even fatal.

But at a time when he is trying to change this country beyond recognition.

Petrolized by bitumen exports and ruled by a Conservative Party that makes the Republican antics of George W. Bush look tame, Canada has become another dysfunctional petro state in full democratic free fall.

And shaming us in the eyes of the world.

Somebody had to say it eh?

The Con regime is out of control.

And the Emperor has no clothes... 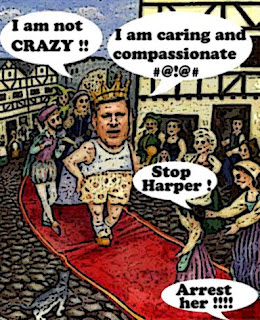 Oh yeah. One more thing. Should you ever find yourself in the presence of our mad Emperor and would-be dictator.

And you can't help blurting out what you think of him eh?

May I suggest that you practice some of these handy moves.

So you can get away faster....

Beleive it or not that cartoon of "Harperland" made the editorial page of our little local rag here on Vancouver island...shows just how universal his "popularity" really is...NOT!!!
Yes, seeing all those Canadians, on Canada Day, hanging out through the bars of the gates from their own taxpayer subsidized building, is enough to bring an old fart like me back to the days of people scrambling and fighting at the gates of Embassies, trying to escape their Third World horror stories...and now? Well just look at us, banana republicans all!
wordpress.leftyinparadise.com

Called fear-mongering and sad to see here in Canada.......supposedly a free democratic Country!!!

hi mizdarlin...One thing I forgot to mention was the way the MSM ignored the story about so many people being prevented from gathering on Parliament Hill. Apart from a brief mention on the CBC's coverage of the event nobody even explained why this happened. And to make matters worse the Cons are also planning to prevent the public from taking tours of the Parliament Buildings. Yes indeed, welcome to Harper's Banana Republic...

hi anonymous...ever since the Cons came to power they have been using fear like a weapon to create wedge issues and pit one group of Canadians against the other. And the only way we will restore true democracy to this country is by defeating them in the next election...

Harper knows Canadian citizen's despise him. He is scared to death for his rotten hide. His outrageous $47 million dollar security bill, is expected to go even higher.

For some reason, Harper doesn't feel safe among the Canadian citizens. I wonder why?

Harper controls the media. That's the fist thing Harper grabbed control of, that is the most important of all. Then he has grabbed control of everything, he got his hands on. All dictators do the same. Stalin, Hitler and Mussolini all controlled their media. Hitler even made a law, no other political party, was permitted in Germany.

Dictators are also very paranoid. Harper will have to watch his back, for the rest of his life. Right now Harper is a prisoner of his own doing. He most certainly is very afraid.