When it Comes to Gay Marriage... 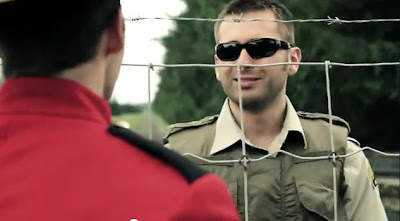 Anything the Australians can do...

But then we got gay marriage and they don't..

You know how I feel about the love between English and French Canadians eh?

And how a fence must never keep us apart.

So it may not be a REAL heritage minute.

You're a poet and don't know it.

We posted that, and the Irish vid in support of equal marriage at DAMMIT JANET!

Haha...sounds a bit cheesy but whatever. Love is love.

That Heritage Moment commercial would never have been made under Harper.

hi deBeauxOs...Oh no... I have been so busy studying for an exam, I didn't notice But good for DAMMIT JANET because the Aussie one was a classic, The first one to portray gay couples as ordinary people, as in doing the dishes. And I liked the other one too.

hi Sam...I'm not quite sure what the Canadian ad is trying to say. But it works on several levels for me. And as you say love is love... :)

hi Beijing...believe it or not I was so sleepy when I first saw that ad, I thought it was REAL. Until Seb took a look at it, ordered me to bed, and insisted on taking my temperature. ;) But you're right, if anybody in the Harper government had anything to do with that, they would have found themselves in Harpo's office getting thoroughly spanked...