Occupy Toronto and the Old Rebel 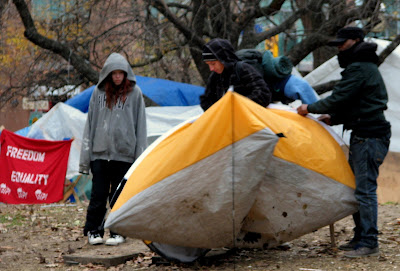 I visited the Occupy Toronto campsite on my way back from work today, and it was a sad and desolate sight. Exhausted street kids tearing down their tents, as an icy wind blew the dead leaves around them.

The demolished kitchen that once fed hundreds of people a day, now only feeding the sparrows. 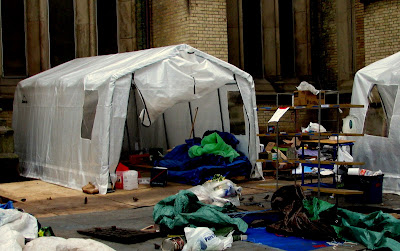 Replaced by an Occupy Cafe doling out soup to the desperately hungry. 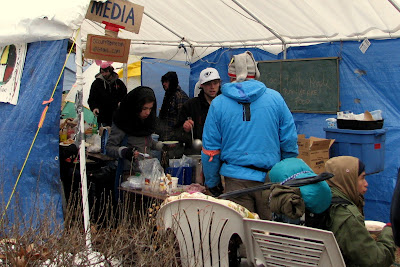 One month and one week after it began, the occupation is winding down.

The humble occupiers driven from the camp, by the complaints of some neighbours, the howl of angry old people, and the rabid words of the corporate media. Like these.

Women are sworn at in the ugliest terms, simply for walking dogs. Men are assaulted. Porta-potties stink. Smoke hangs in the air from open fires. Protesters brawl, smoke marijuana in the open. One neighbour, refusing to be deterred, writes, “When I enter the Park with my daughter I feel the need to wear her in a carrier attached to my body rather than using a stroller in order to keep her safe.” An occupation dangerous to small children lacks moral authority.

Brought to you by the same people who endorsed Stephen Harper's Cons in the last election. And just as outrageous.

For the camp was a peaceful place, most of the occupiers were some of the most decent people you could ever hope to meet.

A Porter Airlines pilot who supports the protest helped the campers fold sleeping bags and sheets at the site yesterday.

“I agree with these people that our democracy is for sale,” said the pilot, who wore a Porter uniform but declined to give a name. “When you can fill a park with homeless people, in what is supposed to be a civilized country, something is wrong.”

And most of them are only guilty of daring to believe in a better world. 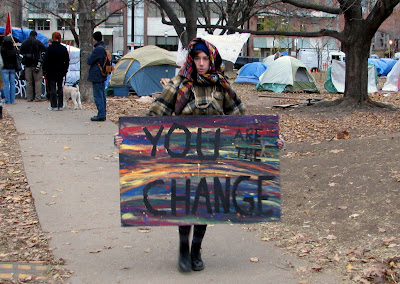 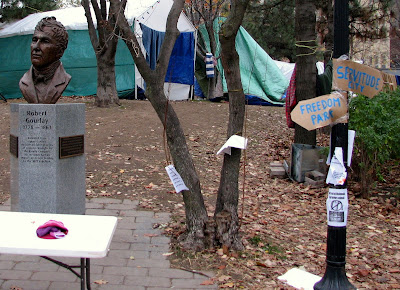 Robert Fleming Gourlay, who once wrote this:

“It is the system that blasts every hope of good; and till the system is overturned, it is vain to expect anything of value from change of Representatives or Governors.”

And was forced out of the country by the reactionary Family Compact that ruled Upper Canada. Throughout the occupation his statue stared at the gazebo where the General Assembly meetings were held. If that old rebel's spirit was in that park it must have been smiling.

And so am I eh? For I'd rather be a cheerful rebel than a miserable slave in Harper's Canada. And as I wrote the other night, this is not the beginning of the end. It's just the end of the beginning.

The camps are coming down. But the best is still to come.

The ghastly old Con mob can howl. A cold wind can blow.

But you can't evict an idea, or stop a movement, whose time has finally come.... 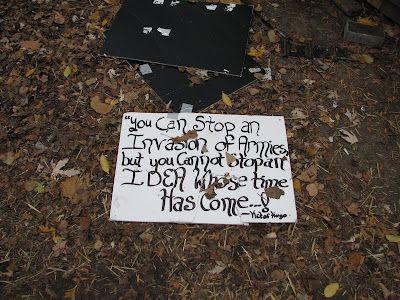 May I blogroll you?

James Morton, that lawyer and law professor of Morton's Musings, is self-admittedly, a member of the 1% club. He blogged last night about having spoken with some Occupy Toronto protesters and appears to sympathize with them.

This, to say, by in large, the corporate, Harper sympathizing media only goes after the lowest common denominator. I found that more often than not, they took the most marginalized looking people and spoke to them, only. At least, that is my take.

Second pet peeve of mine as of late is that whole, "We're being deprived of our beautiful parks!" "We can't enjoy walking in them anymore!" It's hypocrisy at its' best. Since when did most of those folks care about the state of their parks? I'm sure they're the most guilty of dropping their litter and if they're walking their dogs through that park, how many of those complainers actually have a pooper-scooper on hand and actually bend down to clean up after their dog's doo-doo?

Also, were all those parks actually cleaner and safer? When I visited Toronto last summer (a city I still don't know all that well), I walked up Sherbourne from my parents' condo to grab either the 75 bus or the streetcar on Queen. I noticed a lot of homeless/addicts in and around that park. Of course, there are at least two missions across the street, that I saw! Sally-Ann, and something else. The homeless and the marginalized generally congregate in areas where there are missions, soup kitchens, and other outreach programs catering to them. I also remember being pretty nervous waiting for a bus in the evening at that intersection. How many of those citizens go to the media, demanding that those missions on Sherbourne disappear?

That memory also led me to search the St-James Cathedral website to see what, if any, outreach programs are offered through their ministry. I was curious because a) my knowledge of the homeless and indigent congregating habitually in areas where such programs are offered, and b) I wanted to know if that park was really that so-called 'beautiful, upscale park' those wingers talk about. They offer a drop-in center on Tuesdays for food baskets, snack, health clinic, hair-cuts, etc. I suspect the indigent hang around the park particularly on Tuesdays. The parishioners seem to be complaining (hello Dr. Roy!) about occupy. I wonder if they complain about the Tuesday drop-in center?

As for Occupy Montreal, Mayor Gerald Tremblay is hinting at evicting Square-Vic, although, for now, he is very laid back about it. But then, after his last election, he did say he wasn't running for re-election. I have no reason to believe this isn't true. Either way, Tremblay's a lame duck and he knows it.

The media here has been disingenuous with the Occupiers though...they're late with their recent stories or they're spilling half truths, from where I sit.

EArlier, at the end of the afternoon, on my way to my evening shift at my job, when I got off the metro to go to the office, I noticed a few youngsters getting out of one car and going into another with bull-horn and Occupy Montreal banner in hand. I thought to myself, what a clever idea! People from all walks of life, that 99% take public transit--it was afternoon rush hour. They were not disturbing the rush hour commute. Many would hear the message of Occupy and those who don't want to hear it are free to get off the next stop and get on the next car. I think it's something to consider for all the Occupy chapters. Of course, for busses, it's probably best to ask the driver's permission.

I visited the park several times and it was clean.

I brought a very attractive female acquaintance of mine to the park and left her there for a while to go get my bike.

She had no complaints.

I don't know where the Glib n' Stale is getting its facts from.

hi Susan...I'm glad you like my little blog, and I'd be honoured to be blogrolled by you. I'm sure my other five regular readers won't object, and I need all the help I can get... ;)

hi ck...yes that's the ironic and hypocritical part. St James Park has always been used by the homeless, who either won't use nearby shelters, or have been kicked out of them for rowdy behaviour. And the park has never been safer than when the occupiers were there. But I think it has taught us a valuable lesson. If you set up a campsite in the middle of a city you are going to attract the homeless, the desperate, and the mentally ill. It's too much for anyone to cope with, and our enemies will use them against us.
So I'm glad the tents are coming down, because I think there are many other places to occupy, and many other creative ways to fight the fascists, and spread our message around the world.
So I'm still optimistic. Uh oh. Have you heard that one before? ;)

hi Thwap...I have never experienced anything unpleasant in that camp. It housed the greatest collection of gentle idealists I have ever met. So the Globe editorial as far as I'm concerned is simply garbage, designed to please its corporate masters.
And they can roll it up and shove it where the sun don't shine...