The Occupy Movement and the Marginalized 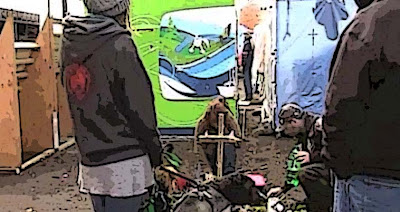 I see the Mayor of Vancouver is using a tragic drug overdose to justify evicting the city's Occupy protesters.

"I have directed the city manager to expedite the appropriate steps to end the encampment as soon as possible with a safe resolution being absolutely critical to that," Mayor Gregor Robertson said Saturday night.

Even though everyone knows that a similar death could happen anywhere in Vancouver. In any other park, in a cheap hotel, in a squalid alley. Because it happens ALL the time.

And everyone knows that excuses are a dime a dozen, when every Mayor has a different reason, but the same goal : It's time to clear those "undesirables" out of OUR public spaces, and if the Canadian winter won't do it, we will

It's depressing, sadly predictable, but it does focus attention on an interesting phenomenon, the influx of homeless and marginalized people into the Occupy camps all over the world. From Vancouver, to London, to anywhere in America.

Homelessness is not a side issue unconnected to plutocracy and greed. It's where we're all eventually headed – the 99%, or at least the 70%, of us, every debt-loaded college graduate, out-of-work school teacher and impoverished senior citizen – unless this revolution succeeds.

Since the occupation began on Oct. 15, the tent village that sprouted has been a choice refuge for Montreal's itinerants. Beside the free food, clothing and occasional shelter, they receive a kind of welcome they're not used to getting.

"What they really need is attention; they need to be heard," Marceau said. "Even if it's just to joke around, there's always someone here to hear them." 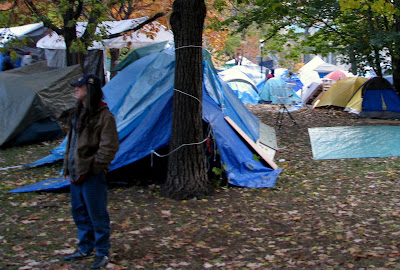 I can't imagine an Occupy movement that wouldn't welcome the homeless and the marginalized, because how can you build a kinder, gentler, world, if you reject our poorest, most vulnerable citizens? City officials may use them against us, but how can we not embrace them?

I have been moved by the respectful, patient way the other occupiers have treated them. And by the sight of all those most humble of Canadians, speaking to a crowd and telling others how THEY feel, for the first time in their lives.

But it's also true that accommodating the demands of such a diverse group of occupiers is using up a lot of precious energy. 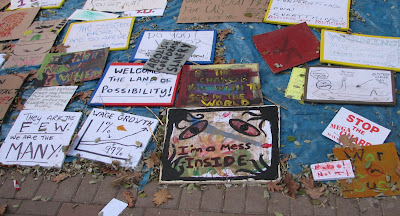 I don’t mean to suggest that the park isn’t full of political conversations, that leaflets aren’t being frantically exchanged and slogans and concerns painted on cardboard and carried about for hours a day. The camp is a spectacle of signage – my favourite scrawl: Justice Is What Love Looks Like In Public.

It’s just that the formal structures of the protest, as they exist right now, the general assemblies and committees, like those of Occupy Wall Street, are less concerned with policy demands and manifestos than they are with the pragmatics of feeding, marshalling, protecting and march-planning.

And I can't help wonder whether whether people are becoming too concerned with occupying a physical space, rather than occupying the world of ideas. Because you can demolish a camp and arrest the occupiers, but you can't stop an idea whose time has come.

But what do I know eh? I have to admit that this wonderful baby movement has made me unusually humble. It turns out I don't know everything. Damn.

So I think I'll save any further thoughts until after I visit this camp a few more times this week... 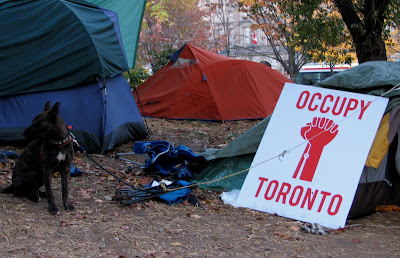 In the meantime, as winter closes in, the camps are still standing.

It's inhabitants are still arguing over how to make a better, less violent, and less greedy world.

And in its own unique way, the peaceful revolution continues. In the camps.

And in the streets...

It looks like Occupy Vancouver may get a reprieve: http://www.theglobeandmail.com/news/national/british-columbia/bc-politics/vancouver-cant-end-occupy-without-going-to-court-council-told/article2221958/

I hope other cities take note of this and realize they can't just shut down a peaceful, ongoing protest.

Vancouver. I miss Skid Row, but I had to get out of the Single Room Occupency lifestyle for a little while, at least.
On Social Assistance, I got $385 for rent, but decent apartments start at $600. And extra $200 for food, and I was supposedly set for a month. So I lived in an SRO for a bit. But before then, I lived in shelters.
Sleeping in shelters was something new for me. I grew up on the rez, so it wasn't anything new to be sleeping in the same room with other people. But to be sleeping with strangers is new. After a while, they stop being strangers. But it's not really solidarity, even then. They're just people you recognize.
Gregor Robindon, huh? Had some hopes for him, but he's definitely no Dipper with this sort of treatment of the city's homeless. No wonder E. Hastings St. is so set against him.
Honestly, in my time in Vancouver, I felt the community continued to work in spite of the city, provincial, and federal governments' best efforts.
Anyhow, in solidarity.

I think it's becoming obvious the the cops and their handlers in office underestimated the protesters resilience and the general support for this movement. Now that the protestors are growing in numbers and have started hunkering down for winter, the politicians have gone past their ignore/ridicule stage and have officially hit a "holy f*ck, this sh!t is for real!" moment. I suspect the excuses for eviction will continue and police violence will escalate everywhere very soon.