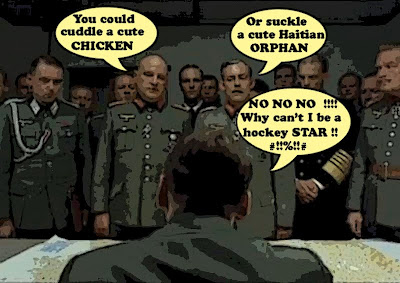 OMG. I knew Great ,Ugly Leader was crazy wild. I knew he has been spending a lot of time in the Con War Room, sweating over polls and trying to figure out how to make Canadians love him again.

MPs will be staying in Ottawa for March Break, part of a plan by the governing Conservatives to pack extra time into the parliamentary calendar.

Can you imagine admitting he was WRONG.... and then punishing others for something HE did? Golly. Will that make him look like Mr Nice Guy? Or Great Mother Leader...the new/nouveau friend of women and children? Or a sinister political thug with a disturbing vindictive streak?

Not that it's his fault eh?

But this is unforgivable.

The B.C. legislature is slightly agog over next week's pending visit by Prime Minister Stephen Harper. Apparently, he intends to address the chamber Thursday...Apparently, the visit was not by invitation from the provincial government. Rather it was Ottawa's idea.

Oh.My.Mussolini. Can you believe the nerve of that tin pot dictator? Inviting HIMSELF to address a provincial Parliament..... while keeping the one in Ottawa chained, dark, and silent ? Even Baby Doc Duvalier didn't do that.

And speaking of Voodoo stuff... only the Monkey God knows what Harper might say ....like.... Welcome to MY games. I light the torch...you get my Porky Action Plan. Or ELSE...

Because in his present mental state Great Ugly is capable of saying or doing ANYTHING to try to fool idiot Canadians into thinking he's just an average guy. A man of the people.

Stephen Harper says he’d rather be playing hockey in the NHL than playing politics in the House of Commons.

Huh? Wot? That wonky nerd would rather be a professional hockey player than Prime Minister? And settle for cheap adulation and hookers...instead of the raw naked POWER he craves to change Canada beyond recognition?

Stephen Harper? A normal guy? Muahahahaha. Any Canadian who believes that one should stop drinking immediately, or get a brain transplant.

Hally Boobah. EXCELLENT. I do believe we have the monster where we want him. Trapped, desperate, and slowly going crazy. But still thinking he's a political genius who can fool ANYONE.

Good work people. And how do you like that onion ?

The one that's already almost TWICE as popular as he is. Mmmmmm.... TASTY. And how appropriate eh?

He set out to be King Stephen. But ended up as our Lord of the Onion Ring.

Which does come with a throne.

Just not the one he wanted... 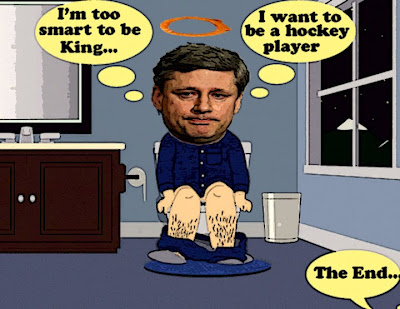 One can only hope that Team Canada wins a medal in hockey.

I'm certain he's been fantasizing about this--and his presenting the gold medal--for at least a year now.

He'd be a real cross kitten if it doesn't happen. Cross like having visited a spay/neuter clinic.

The guy's nothing more than a puffed up Winnipeg jam buster donut. Someone will come along and he'll be history.

Spring break. March Break.
Harper is a man who puts great emphasis on family values.
Won't his kids be broken up that he will not be in their house and not be taking them to Disneyland or on a ski trip and instead will be spending that time in the big House?
And all those other MPs deprived of precious family time as well.

I wonder what this does to Harper's spring game, given Jack Layton's illness having come to light?

I think, unfortunately, Stevie will kick him when he's down.

I do wish Jack Layton a speedy recovery.

EXCELLENT. But why Winnipeg? What have they done to deserve him? :)

hi Oemissions... very good point. How dare Great Mother Leader deprive all those MP's children of a chance to go to the beach?
What a vindictive beast. REmind me to use this against him... :)

Hi CK...Whether Stephen Harper goes for an election depends only on the polls. Since he's incapable of empathy I'm sure he couldn't give a damm about Jack.
Unless the polls told him that would make him look callous.
In that case I'm sure he'd turn up at the hospital with a bunch of flowers and a Tim Horton's coffee.
If I was Jack I'd lock my door... :)