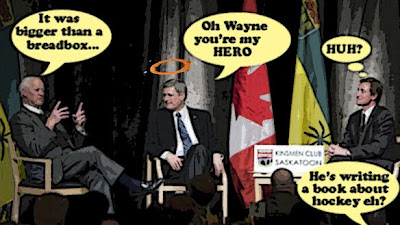 Oh no.Somebody call a guy with a net. Our Lord of the Onion Ring has been staging his own version of Question Period. And pretending to be a hockey fan. Again.

“He’s like this all the time. He’s like a kid in a candy shop — he loves hockey,” said a media representative of the Prime Minister’s Office, who went on to jokingly agree that it was no wonder Parliament Hill came to a grinding halt a few weeks ago after a prorogue was declared. Canadian politics are kind of drab when matched up with the likes of Wayne Gretzky.

And as you can see it wasn't pretty.

Though casual about it, it was clear Harper was simply infatuated with No. 99 and was left hanging on every word that escaped from Gretzky’s humble lips. Gretzky could have asked Harper to prank call North Korean dictator Kim Jong Il and fart into the mouthpiece and the prime minister likely would have agreed to his request.

But what do you expect? Even Don Martin now admits Great , Ugly Onion Ring leader is DESPERATE.

Perhaps the realization they have been too-smart-by-half is reflected in amateur-hour mistakes that run counter to the Conservative's cool, disciplined style.

All these empty ministerial pontifications prompted the CBC's Rick Mercer to remark on Twitter that "it's like when they wheel out [North Korean leader] Kim Jong-il just to prove he's still upright and breathing."

And the best thing?

Next week looks no better, with Mr. Harper making his first address to a provincial legislature, which raises the questionable optics of how Olympic host politicians are actually working in a Liberal controlled B.C. legislature while his government stands adjourned.

Because Great Onion Ring said he couldn't work and watch the Olympics eh? When everyone knows he's been extremely busy, doing one photo-op after the other.

And selling us out to the Americans.

To put it another way, we've promised to open our so-called sub-national government procurement markets permanently in exchange for partial access to a U.S. program that is due to expire in 11 days.

Gawd. Is that just incompetence? Or is it treason?

And how I wonder does Harper think he can win over the people of B.C.?

Not just by being there I hope.... 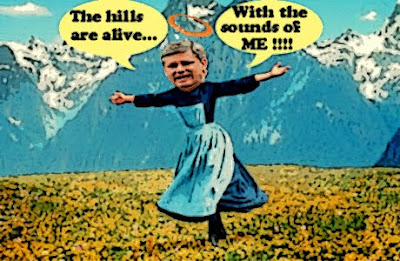 He does? OMG. Call the guy with the net. Or press the emergency button.

Heh. Heh. Heh. I LOVE the smell of onion rings in the morning.

We have these Cons where we want them.

And now we're going to def-EAT them...