Alexandre Bilodeau and the French Question 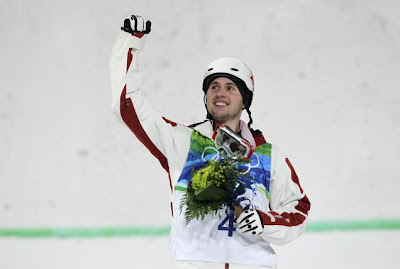 I'm trying to stay away from the medal hysteria, because it just puts more pressure on our athletes. But I have to admit that I practically hit the ceiling with joy when Alexandre Bilodeau of Montréal, Québec, won Canada's first gold medal.

Not just because I'm a proud Montrealer, and the story of him and his disabled brother is so beautiful. Or that his performance was so awesome.

But also because of this.

Which is so unfortunate, if only because it gives Pauline Marois,the bourgeois queen of the PQ, some cheap ammunition.

Canada, she said, has demonstrated beyond any doubt that it considers the francophone minority as a negligible quantity without importance, or worse, a burden for the anglophone majority.

Which is predictable nonsense, but no doubt some will believe her.

The fact is the ceremony could have been a bit more French, especially the speech from the VANOC chief. I mean when you only have four or five French words to say, and you mangle them so badly, it's not too brilliant. And it doesn't look good.

But it was still a marvellous pan-Canadian show. And the sight of a Quebec kid flying over the beautiful golden prairies, is the kind of Canada I believe in.

But then there is this poll.

In fact, the only group further down the list than French Quebecers when it comes to who English Canadians view favourably are aboriginal Canadians.

Which makes me laugh, when I see some of these same rednecks now acclaim a Quebecer as their hero.

And as a guy who lives with one foot in each solitude, and is presently working in Toronto, also depresses me. Because I read and hear a lot of anti-Quebec comments, that I don't dare share with my Frenchie friends...or even my companion Sébastien .

Because most of them think Canada is great eh? And I don't want to disappoint them.

And the worse thing is that Stephen Harper uses this anti-Quebec sentiment, like he did during the coalition crisis, to prevent us from joining forces with the Bloc, and chasing these Cons from power FOREVER.

Oh well. More on that some other day. Right now I just want to say that I consider the French-speaking people of Canada...and our beautiful native people...national TREASURES. To be celebrated and embraced. And anyone who doesn't should be ashamed of themselves.

And of course I also want to say that Alexandre Bilodeau, from Montréal, Québec.

Is an amazing CANADIAN champion... 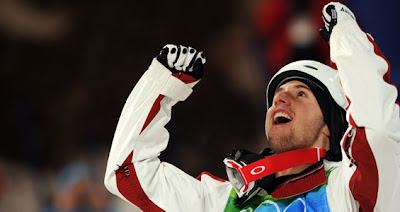 Marois is a buffoon. I sometimes see her on the boob tube and I honestly think the medication has been badly mixed.

I gather that strategists brought her back from that hole she was from was solely to bring the PQ back out of it's slump; broke and in 3rd place. She's done that and there's nothing left for her.

When it comes to be premier or to begin work for next sovereignty referendum; they will make her step aside. I would say watch for Bernard Drainville; PQ MNA for Marie-Victorin or on an off chance, Pierre Cursy, but he's a bit too radical.

I can understand listening to Marois going off on a rant can turn a lot of English speaking folks sour toward the French language which is unfortunate.

I understand the issue at the Olympics (take your word for it; I've boycotted 'em). They probably could have spoken more French. And I certainly see the hypocrisy of Anglos claiming Bilodeau as their own which, clearly, he is not.

However, given only 12% are anglophone in Quebec, the French language is in no danger of being lost here.

It's a shame the politicians and the media can't stop trying to rile things up between Quebec and the ROC even during the Olympics. Lets give it a rest and cheer on our athletes with no strings attached please!

I felt exactly the same .
What a sweet guy!
And a pea souper.
Too bad Canadians don't get a daily dose of Hansard to see all the really good private members bills that have come from the Bloc concerning the well being of Canadians.
Next we need a First Nations gold medalist.

Unfortunately, Adam, Strings were attached so to speak.

In Vancouver, since the bid in 2003, cuts were made to social housing, hotels where the homeless usually stay were transformed for tourists. The city of Vancouver pretty much made homelessness illegal without offering a viable remedy. Cuts were being made to programs for Vancouver's disenfranchised.

Heaven forbid these overpaid athletes should go out and get a real job. No one should be making that kind of money.

I for one, am with the disenfranchised of Vancouver.