Stephen Harper and the Prorogation Protest 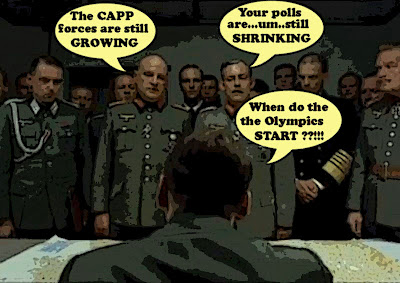 Oh dear. It looks as if Stephen Harper has disappeared from public view. Which is what he always does when he goes off the deep end and pulls some kind of boo boo.

Which explains why he's probably sulking in the Con war room, plotting all kinds of desperate moves, biting the carpet, and counting on his Nuremberg moment.

No doubt hoping that Canadians will love him again if he waddles the Olympic torch around the stadium. Or claims he is writing a book about Olympic movement. Even longer than the one on hockey.

But of course I'm sure he's not the only one hoping that Canadians will forgive them for what they did ....or wrote.

Grassroots fury? Thousands of people in the streets, switchboard’s browning out with indignant calls and a tsunami of e-mails might be considered a grassroots fury. Facebook groups, on the other hand, amount to a kind of ephemeral eruption that usually passes like a hot flash or the urge to vote for the Green party.

But where Harper has a hard time taking the national pulse, he enjoys an uncanny skill at divining what the people don’t care about. Harper knows ordinary Canadians don’t care about the intricacies of Parliamentary procedure.

Some political judgement....some ephemeral eruption. More than 222-thousand and COUNTING.

Oh boy. More wrong and idiot than that and they have to water you eh?

Besides that kind of tired old cynicism in a country as young as Canada makes me want to VOMIT. Because the day a country stops caring about democracy....or dreaming of something better... it shrivels up and dies.

Oh well....the important thing is that we really showed them. Thousands and thousands of decent Canadians all over the country FINALLY stood up to those foul Cons.

And since I FINALLY got some time to put a proper video together of the rally I attended. Whew.

I do declare it was AWESOME...

Eat your cynical hearts out you miserable Cons.

The Canadian people have said enough is ENOUGH.

Us over at the Montreal chapter have a meeting Friday evening to discuss our next plan of action. About time too, I thought they decided to throw in the towel. It has been hard getting the Quebec separatists on board with us. To convince them that their democratic rights were stripped as well as the rest of us.

Gilles Duceppe gave a good speech and was well received by all though.

Keep up the good work, my friend. Our gift to ourselves will be stopping Stevie from getting his totalitarian regime. OOps! did I just say that aloud?

The ReformaTories and Harper jumped the shark in Québec during the last federal election. Remember the "Culture en péril" YouTube phenomenon?

So it's difficult to get a head of steam going in that province, even in Montréal, regardless of people's allegiance to sovereignty or not. People have moved past anger for the Cons to icy Contempt for them, imho.

Nice post, Simon. Seems that the BQ at least respect our Parliamentary democracy more than the Cons and their supporters (unless of course it works to their advantage, then they will be accussing everyone else of being undemocratic).

Their internal polls must be confirming to them that they are in trouble. In addition to the usual suspects at the Nat Con-Post (Ivison), notice how Norman Spector, the guy who saw nothing, heard nothing, said nothing during BM's Bear Head episodes, has been defending Harper's prorogation and trying to scare people again about the coalition. Spector actually had the gall to criticize Colvin for not going public -- amazing, eh?

The more these guys rant, the more hopeful it is that we may actually be able to turf Harper soon.

hi CK...hey that's great news.I'm glad to see that my homies are planning something. I do hope we can keep the pressure up on these Cons. It doesn't have to be mass rallies but just enough to keep the issue alive.
And yes toppling King Stevie would be the gift of a life time... :)

hi deBeauxOs...yes I agree with you.The distrust and contempt for Harper is so deeply rooted in Quebec, nothing he says or does will change anything. Which is why I'm actually glad to be studying and working in Toronto these days, because the next election will be decided in Ontario...

hi anonymous...thanks...and yes the BQ and Gilles Duceppe in particular are ronically excellent defenders of Canadian values. Only in Canada eh?
And you're also right about how desperate the Cons must be. The way Normie has been flapping his wings recently is more evidence of that.
My hope is that the prorogation scandal has served to crystallize all the bad feelings Canadians had about him, and that he will have a much harder time fooling Canadians again.
But then he's a hopeless monster and I'm a hopeless optimist... :)