Jack Layton and the Werewolf 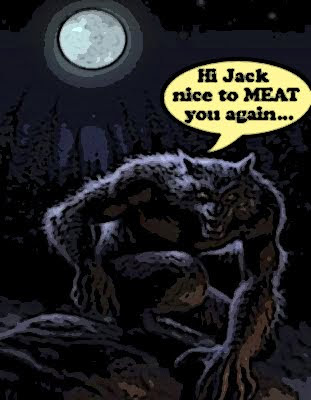 Uh oh. I see Jack Layton has gone to meet Great Hairy Leader in his office.

The NDP leader said he had a "cordial" 30-minute afternoon meeting with the prime minister and pressed the case for getting more money into the hands of women and seniors. Layton also urged the importance of creating jobs, and said Harper agreed with him.

And I'm glad he's giving the Cons some good ideas because they don't have any.

But all I can say is thank goodness there wasn't a full moon.

Because who could forget what happened last time... 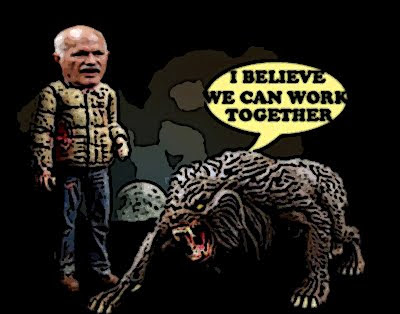 One moment he was Mr Cordial...or Mr Pussy.... purring over a cup of tea.

And the next moment he was Mr Werewolf, snarling, hissing, slurping blood out of a bucket, and trying to KILL the opposition.

Because he just can't help himself eh?

So watch out Jack. Remember what he really thinks of you.

“It seems that no amount of frenzied activity, adroit performance or feel good announcements by the Prime Minister can resuscitate their flagging fortunes.”

And above all don't forget that a progressive coalition is to Great Hairy Leader what a wooden stake is to a vampire.

Mr. Graves says it is now apparent that no political party “can currently produce anything approaching a legitimate mandate to govern the country.”

The only way through this, he says, is for voters to start looking at “options like coalitions if they want to avoid fractious minority rule.”

Because the day that coalition rises, Harper and his Cons will be finished FOREVER.

Oh yeah.... one more thing Jack. Get better soon, because you're a really decent guy.

But the next time you see Great Hairy Leader, whatever you do, don't offer him some beef chow mein. Because he's a monster.

And I understand he LOVES it...

And do we not have a video of the Great Leader wanting to teach the lefties, socialists (that is you, Jack) and separatists a lesson?

Seriously, though, I think that Jack does know about Harper and I doubt that anything would change the fact that he had prorogued to escape the detainee issue.

What I do not understand is why the Libs and the NDP do not put aside their differences, at least temporarily, until they get rid of this govt.

hi anonymous...yes I'm sure that Jack knows that it's not a good idea to meet Great Ugly when there is a full moon. I was just having a little fun. At this bleak time of the year I feel the need to do that... :)
But I am serious about the idea of a progressive coalition. No matter how you look at it, it's the ONLY way to get rid of the Cons. Allowing them to change the country with just 30 percent of the vote is not just ridiculous, it's practically CRIMINAL...