The Death of Brendan Burke 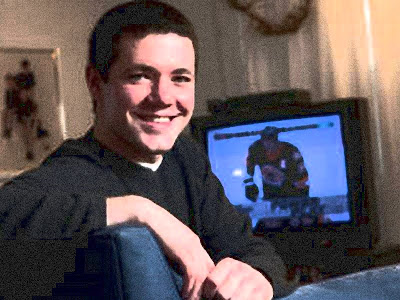 What a sad story. So young, so brave, so much to look forward to, gone in a moment.

And he must have been so proud of them. Especially his old man.

As for us gay guys who love sports, but so often have our fun ruined by homophobia. Or have to grow up without any sporting heroes, because bigotry makes them afraid to come out. Or ruins their careers.

Way to go Brendan. Rest in peace brother. You didn't get much time. But you were OUR hero.

And we will REMEMBER...

Here's a video of Brendan and his dad being interviewed shortly after he came out.

I've never quite figured out homoophobia as expressed by "macho" guys in groups at bars and homes in the male ritual bonding exercise that is sports.

They're really not much different than the gays in bars on a busy night except the gays smell better and are better dressed.

The sports bar guys and all that macho bravado shown by teams on the field are so shot through with homoeroticism, it's a wonder they shower together and not worry about dropping the soap.

Most sports defeat me as do awards programs. Just give me the Janet and John bit--the one page summary and I'm happy with that.

To my books, a high five is like a casual gay hug of affection. Anything else raises the homoerotic score appreciably.

Criminy! And those guys profess to be straight.

Can you not have sporting heroes unless they're gay? We understand that a person's sexual orientation shouldn't matter. Why the double standard?

This young man's death is sad but that shouldn't depend on whether he was gay.

hi Torontonian...I've always loved to play sports...especially football (soccer). But I've never found a locker room homoerotic. In fact I can't think of a less romantic setting.
And neither have I ever encountered homophobia in sports.Just the vulgar yapping you'd expect which doesn't bother me at all...and yes lots of male bonding...which doesn't bother me either. :)
But I have heard all kinds of horror stories about kids being forced to give up sports because of bigotry.
So it bothers me that people would be that cruel and treat other like that...

hi mound...I have had lots of sporting heroes and as far as I know all of them were straight. But since there is so much homophobia in sport I wouldn't have minded a gay sports hero or two just to show that we are really EVERYWHERE.
And you're right that the death of any young person is tragic, but since Brendan had set such a good example, and was so brave, I found his sudden death particularly moving...

I guess the important part is when you wrote "as far as I know." The thing is, I don't want to know. I am repelled by overt displays of sexuality whether hetero- or homosexual. I want everybody to be free and comfortable with their own sexuality but keep it to themselves. To me, sexuality ought to be a private, individual thing and no one else's business. I'm not against modest demonstrations of affection - holding hands, etc. That's fine, who cares? There's a line between affection and purposely sexualizing your persona. BTW, a member of my immediate family is gay and the only thing I find troubling about that is how troubling some people find it. Go figure.