Johnny Weir and the Homophobes 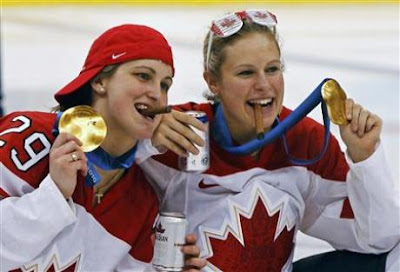 When I look at this great picture of two of our hockey champions celebrating after their golden victory.

And read what some are saying about them.

"I don't think it's a good promotion of sport values," Gilbert Felli, the IOC's executive director of the Olympics, told the Associated Press. "If they celebrate in the changing room, that's one thing, but not in public. We will investigate what happened." 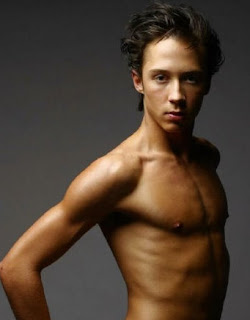 No not that Johnny, the three-time national figure skating champion of the United States. 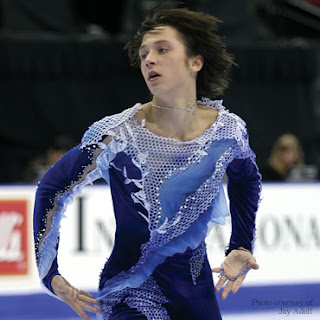 And what they said about him.

How the homophobia welled up so easily out of the sewer of bigotry.

And how much I liked Johnny's reply.

I hope that more children have the same opportunities as me, with the same parents as me, that let me be an individual, who gave me freedom, and taught me to believe in myself before anyone else would believe in me.

Because although I'm a pretty conservative gay guy who doesn't know anything about fashion, and wouldn't wear a furry thing around my neck in case it bit me.

I believe in a world where girls can be butch and boys can be flamboyant.

It's so much more interesting eh?

So all I can say is our women's hockey team rocks. Johnny is Johnny.

Johnny Weir achieved a major goal in life by the continual training and self-discipline. He was recognised by his peers and the public for such achievements.

Homophobes, on the other hand, are nothing more than trained parrots.
Their only achievement is angering the general public and gaining notoriety in the press. There's no special training to become a homophobe--just an empty mind and an ability to parrot Biblical verses without analysing them.

Now, where's the success story? Is it with Weir or the homophobes?

If it were men behaving like the women did, nothing much would have been reported. It's very "common" for men to be drinking beer from cans and smoking cigars. Just like it's more common to see macho men rather than flamboyant ones like Johnny. But uncommon does not equate to "bad," "awful" or "wrong." Well, not unless you make it so in your own mind. These people are simply different. And different does not mean "bad."

hi Torontonian...I agree with you. Those homophobes have no class. I must say I thought Johnny handled himself exceptionally well at that news conference. I never will understand how some people would like to make us all the same. What dreadful BORES...

hi Jason...you're right... the public had left the arena and they were just having fun, like the guys do. Didn't the guy who won the skeleton race parade through the village in Whistler carrying a huge pitcher of beer? And as I said to Torontonian vive la difference !! :)

P.S. On the other hand I personally wish the skater boys were just a little bit hunkier, and performed dressed only in bathing suits, so I could admire their tattoos... ;)

Is it just me? Or are figure skating outfits just getting more and more tacky?