Why Canada Must Recognize Kosovo

It looks as if the Europeans now have a really good reason not to send more troops to Afghanistan.

They may need them to defend Kosovo.

Russia's ambassador to Nato, Dmitry Rogozin, has warned that Russia could use military force if the Kosovo independence dispute escalates.

Trust the Russians to pour vodka on this bonfire of emotions.

The Serbs, with their legitimate right to mourn for the loss of Kosovo, were transformed into vandals who loot their own city

It's a greedily practical turn to the famous "inat" and spiteful defiance that Serbs generally offer the world community. .

There is one known fatality: a severely burned body was found inside the vandalized American embassy. He has no name, no face and is probably a Serbian hooligan overwhelmed by his own arson. The latest victim of a lethal myth.

I feel for the Serbs. Their capital Belgrade has been levelled over the course of their long and bloody history by 30 different armies. They have suffered a lot. Subjugated by the Ottoman Empire...murdered by the Nazis. They have been victims as well as victimizers.

So I can understand their anger and their humiliation at losing the land that contains some of the most sacred monuments and monasteries that define them.

But as I pointed out the other day...they have nobody to blame but themselves. Or the leaders and generals who led them to disaster. Because genocide is genocide. And you can't expect any people to want to share a country with those who tried to exterminate them. 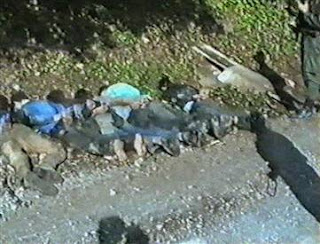 What is done is done. And the only way out of this long nightmare is acceptance and reconciliation.

The Serbs must accept that things cannot be the way they were. The Kosovars must give them time to do that. Reach out to the Serbs within their borders. And above all protect the Serb monuments and monasteries as they would their own most precious sites..

There are some encouraging signs.

And hopefully one day the two people can bridge the hatred that divides them...and live in peace as neighbours.

In the meantime countries like Canada should stop fussing and recognize the new state.

Kosovo has split the nations of the world into two clubs: those who fear their own disintegration and those who do not. The Canadian government has signalled through silence that secession, even in the Balkans, is still too close to home.

Recognize that it is a unique case, and does NOT set a precedent for Quebec.

Because the more they hesitate the more they will encourage the Serbs to pursue their lethal myth or delusion. And their belligerent Russian allies to try to divide Europe and NATO.

Which could lead us to the brink of disaster.

The Serbs can truly claim to have been victimized by history. As well as by their own actions.

Talk all you want but I don't think Steve knows what to do with this one. It's kind of fun to watch him deal with reality that doesn't fit his plan.

Here are some websites to check out and inform yourself more or not it is your choice.

Many people in the Serbian community do not even react to propaganda and numerous Canadians and Americans who claim to be experts on Kosovo and the Balkans. We just watch as you erase our suffering and pain and ignore it. We watch as you portray our extremists as representatives of the whole nation and then when we ask you about your history and more recently the Airborne Regiments crimes in Somalia you simply turn away. I like Canada but it is very hard when one is surrounded by people that not only do not care but put your culture down without really understanding it. I actually prefer does that do not care or don't know their words hurt me less.

Cheers
A fellow Canadian-Serb
Albanians and Serbs in Kosovo: An Abbreviated History
An Opening for the The Islamic Jihad in Europe
http://lamar.colostate.edu/~grjan/kosovohistory.html


March 17, 2004 Albanians burnt Orthodox churches and 60,000 Serbs were driven from their homes in the small enclaves of Kosovo. At least 19 civilians were killed while the Kfor peacekeepers largely sat back and did very little.
http://www.telegraph.co.uk/opinion/main.jhtml?xml=/opinion/2008/02/13/do1304.xml

ABUSES AGAINST SERBS AND ROMA IN THE NEW KOSOVO
Human Rights Watch-1999 Report ( a bit dated) But considered somewhat of a credible source
http://www.hrw.org/reports/1999/kosov2/