When Canadian immigration officials decide whether to grant refugee status to Jamaican gay activist Gareth Henry. Which better take about as long as it takes to say:

They should not only remember what the homophobic mob did to him and his friends in Jamaica.

They should also remember how another bloodthirsty mob reacted the day they murdered the noble and brave gay leader Brian Williamson. 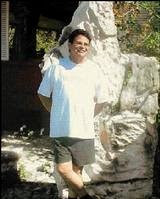 By holding an obscene murder party.

On June 9, 2004, Brian Williamson, Jamaica’s leading gay rights activist, was murdered in his home, his body mutilated by multiple knife wounds. Within an hour after his body was discovered, a Human Rights Watch researcher witnessed a crowd gathered outside the crime scene. A smiling man called out, “Battyman [homosexual] he get killed!” Many others celebrated Williamson’s murder, laughing and calling out, “let’s get them one at a time,” “that’s what you get for sin,” “let’s kill all of them.” Some sang “boom bye bye,” a line from a popular Jamaican song about killing and burning gay men.

Police claimed he was killed in a robbery. But when you kill a man by stabbing and chopping him more than 70 times with a machete...it's a HATE crime.

But the police won't call it that ...... because they're CRIMINALS as well.

On June 18, 2004, a mob chased and reportedly “chopped, stabbed and stoned to death” a man perceived to be gay in Montego Bay. Several witnesses told Human Rights Watch that police participated in the abuse that ultimately led to this mob killing, first beating the man with batons and then urging others to beat him because he was homosexual.

And it's not only gay men either. Lesbians are being driven from their homes, raped, and murdered. The whole island is sewer of homophobia that needs to be quarantined from the civilized world.

That's why I was glad to see that some religious leaders are talking about organizing a global boycott.

''This is the beginning today of a global movement to stop the violence against gays in Jamaica,'' said the Rev. Elder Nancy Wilson of the Metropolitan Community Churches

Wilson said if government officials fail to take steps to stamp out what appears to be sanctioned homophobia, religious leaders would consider a boycott of Jamaican goods and tourism.

Which is excellent. Except that the boycott should begin right NOW. The Jamaicans have had more than enough time to change their murderous ways. But STILL the killing goes on.

The latest incident occurred on Jan. 29. According to local press reports and New York-based Human Rights Watch, a mob broke into a house in the central town of Mandeville and slashed the occupants inside, sending two to the hospital. One was severely injured and the other is missing and feared dead....

It's time for decent people everywhere to make the Jamaicans pay for their crimes against humanity.

You can write to your M.P and the Jamaican High Commission.

Refuse to buy anything made or grown in Jamaica.

Or hand out pamphlets like these outside travel agencies...along with frightening reports about its terrible crime and malaria problems... to warn Canadians not to go there. 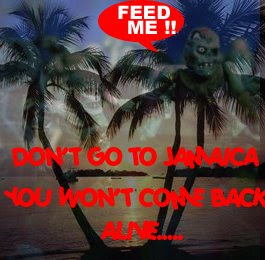 Although if you can draw like Mark.....that's even better...

The main thing is to let Jamaican officials know that there is a price to pay for genocide.

That the world is waking up to the horror of Zombie Island. 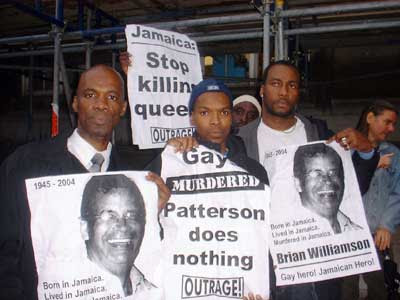 wow... u are no better than all who hates.. wen reading this yes its sad but u sound just like the mob that murdered that man.. u must remember not all Jamaicans participated.. yet.. u take it out on all of us... U keep using the term Jamaica and Jamaicans... I think u should retract your story and put the word most or some in your statement.. because I feel you are attacking me in this article,, as I am Jamaican... Wen u cut off food and money from my country... do u think it will make us like you?... what is the aim? I know u are bitter but u sound like a red neck in the south... u are no better than the mob that killed that man... u want to kill my people by stopping their food... come on lets be honest this has nothing to do with the man that died and every thing to do with ur hatered for all JAMAICANS.. I know u will not post this comment... tssssssssssssk

hey, i mean that's some hard shit with what you guys are going through. don't get me wrong i don't think that its right for two men to sleep together because the bible said that its wrong. when saying that no man has the right to judge another man because they not god and when the time come they will be judge all the crime they take on another human life. if someone want to be a battyman then its their fucking business. yes its wrong because god made man to a women and women to a man but who the fuck get's to decide if you live or dies? nobody but god him self. you know what am a jamaican myself am very upset after reading some of the things on here from how another man or a groups of people could treat another human. if those people know their history as black people they would do half the things they do to each others. in the first fucking place we were all slaves. we have slave graves of our fourth parents right now in jamaica and the mother fucking black on black crime is wrong and makes black people look weak and as easy target. black men is their own wrost enemy. i live in the uk and just the 31th of october 2009 i saw 300 white men and white women who out protesting against asian and black people that they should be remove from the country to go back home, now some of these people who they want to remove were born here they childrens were born here and yet they are being told that should be here by people dislike they because of the clour of their skins. i know not all white people stay that way because these days different race are now mixing together but the point am making is while you all help to kill each other because of lack of intelligence and your history, you are only making things easy for the enemies to get us out of the way. don't you think black people suffer enough already through slavery? here in england black boys from 15 aged of age are killing each other lol lol it may looks like am laughing but am fucking not. man stop the bull shit and go read up on you history. its was black history month last week, how many black last their lives to other black mens?

oh by the way that person who read up on your site and telling you that you are no better than the mob them is just a little upset and not seeing the bigger picture as they are not the one who was stabbed and cut-up or anyone from their family member so its easy for them to turn your story around and make it also about them self. why don't try puting yourself in those gay guys must feel and imagine it happening to them and see how their story and stone change. yes wrong how you say that no one should go to jamaica cause they will not come back alive and when you refer to jamaican but understandable because if someone frinds were beaten and killed and force to leave their country while the police join in or stand by and watched. a groups of people standing over a dead guy body and trampling on him and stouting batt boy fi dead. the pulic who is commenting on how not all jamaican are the same, well they all stand by and did nothing but watched so they are as guilty as the mob too and they don't have the right to speak about feelings. anyway who ever set up this web set just be careful of wwho are around you as you never know. god will protect you all. bless

listen here.
im from the west which is a mayjor tourisn industry. i worked in negril and negril is known as the los vegas of jamaica. i saw lots of gays and lesbians because its a an adult hotel and is was loated just next to hedonism.
I assure you, jamaicans arnt concerned with tourists wether white,black,hispanic, indian...
not all jamaicans are homophobic.
you dont know anything. you should get your facts straignt and stop scaring gay people.
besides jamaica has improved so much that gays can dress how they want and even hold hands in public.
you make us all look like uneducated cave people.
the few gay attacks happend in kingston only.
there are 13 other parishes in jamaica. tourists dont even go to kingston. only business tourists and ive never heard of a jamaican attacking a tourist. weather gay or straight.
tourists mainly come to montegobay and negril. here in the west people are very humble and mind their own business.
you really seem to have the mentality of the very same gay attackers you are writing about.

Poor education poor health poor economy in debt to the rest of the world. Do Jamaicans even know that the white people that slaved them many years ago made the anti buggery laws. Uneducated they blame everything and everyone for their lives instead of bettering their lives and helping each other they hurt kill and threathen gay people. Jamaica needs to start realising that things wont improve till the law and attitudes change.

No this is about cruel barbaric killing