The New York Times notices the gay holocaust in Jamaica.

One night last month, Andre and some friends were finishing dinner when a mob showed up at the front gate. Yelling antigay slurs and waving machetes, sticks and knives, 15 to 20 men kicked in the front door of the home he and his friends had rented and set upon them.

The mob pummeled him senseless. His right hand, the one he used to shield himself from the blows, is now covered with bandages. His skull has deep cut marks and his ear was sliced in half, horizontally. Doctors managed to sew it back together and he can hear out of it again.

Next to Andre, huddled in a corner during the attack, was his boyfriend, 22, who goes by the nickname Junior. Deep machete slashes run up and down the arm he held in the air to protect himself. His head was also battered, though he escaped a more vicious beating by running through the mob waving a kitchen knife.

What a place. What cowards.

And don't you love the good pastor who gave Andre refuge? And is now trying to turn him STRAIGHT.

“Instead of cutting him, people should be counseling him,” said the pastor, who declined to be identified out of fear that his family might be attacked for protecting a gay man. “He needs to get over this demonic thing.”

WHO is demonic? WHO needs counselling?

Kookamunga. Are the homophobic zombies of Blood Island losing their minds...... as well as their heads? 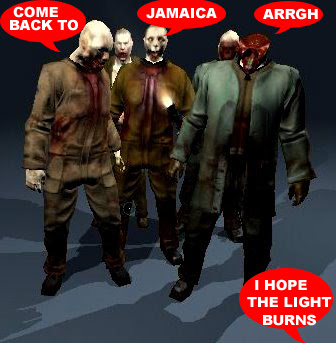 The good news is that now that the MSM is finally shining a light on the horror that is Jamaica...and it's not just the gay press...or bloggers like me or Mark.

Now there are NO excuses.

Now that EVERYONE knows what is going on in Jamaica. That people are being murdered or hurt for who they are or who they love.

What are we going to do about it?

How are we going to STOP it?

P.S. the other good news of course is this:

Gareth Henry, a former leader of the group, fled to Canada last month, saying he had grown tired of being threatened. “Here, I’m no longer living in fear,” he said in a telephone interview from Toronto. “I’m finally able to be myself, to be an out gay man.”

Kinda makes me proud to be Canadian. Damn.

Words like "savages" and "cannibal" are very loaded, and are often applied to black people as a result of horrendously racist ideology that sees Africans and their descendents as wild, animal-like beings. I don't see what use "cannibal" is here, there is nothing in this story about people eating each other. Where does this word come from? The homophobia in Jamaica is appalling, but it can be combated without introducing a lot of racialized rhetoric into the argument.

Hi Ben...anyone who has read this blog knows that I am not a racist...that I abhor it as much as homophobia.If that mob aren't a bunch of savages I don't know who are. And the Cannibal word is a running gag I have with a comic book zombies that do eat people.
But fair enough...if anybody thinks they could be construed as racist that's reason enough to change them. So I did Besides I think I like Blood Island better.... :)

Typical Jamaican you speak about their homobigotry and they answer by turning into a race thing.