Serbia and the Trap of the Past 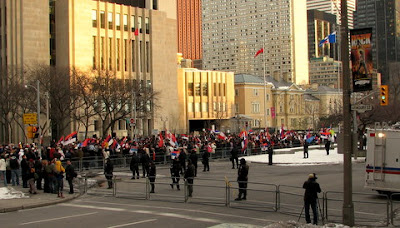 I was downtown today when I came across this Serbian-Canadian demo.

Police were taking no chances. 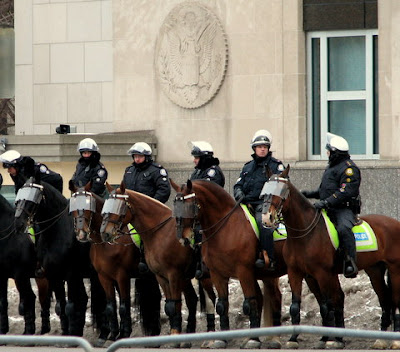 They even had a fire engine standing by. I guess they were worried somebody would burn the American consulate down. And blame it on the Americans.

But this was a noisy but peaceful crowd. 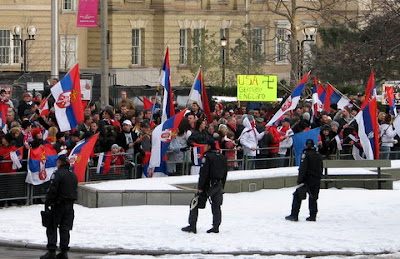 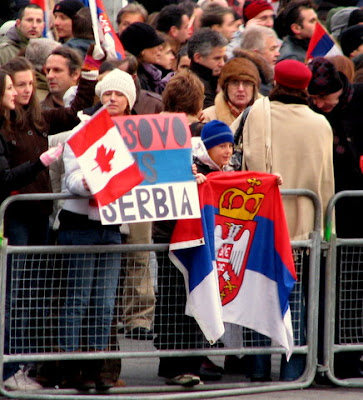 I couldn't help but be impressed by their pride and their passion.

But I also couldn't help but wonder as they chanted "Serbia...Serbia....Serbia."

Whether they understand that the dead of Srebrenica also speak loudly from their graves. 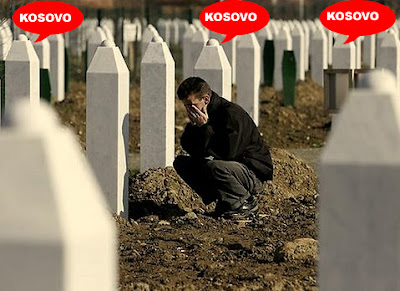 And whether the proud Serbian people still don't understand what happened and why.

And really are trapped in the past.

Every effort has been made by NATO, the United Nations, the European Union and the United States to accommodate Serbian fears and sensitivities. Belgrade has never demonstrated any remorse for the carnage unleashed by former dictator Slobodan Milosevic on Kosovo’s ethnic Albanian majority — nor any willingness to negotiate the province’s independence.

Serbian leaders have a clear choice: stoke this xenophobia and self-pity, and further isolate themselves, or tamp down these passions and accept Europe’s offer of economic and political integration.

History has proved that Balkan resentments can trigger wider conflict. It must not happen again.

I don't want to take sides in this conflict. All I wish for is peace and reconciliation.

But it seems to me unless Canada and other countries recognize Kosovo....and help the Serbs come to terms with the new reality. This fatal blindness or delusion will continue.

And the situation can only get worse...

And some U.N. guy was sobbing and beating his fist on the hood of a jeep. And when Sébastien asked him who was to blame he said "everyone."

As in those who did it and those that didn't stop it.

It's his nightmare... and because I love him ...mine as well.

Once again I felt compelled to respond to your blog. Those Serbian people were there because their story is rarely heard and if it is people try to deligitimize it and somehow disprove it. Because it does not fit the clear-cut lines of who is good and who is bad.
I have some names and links for you- I was born and raised in Bosnia and am currently undertaking Conflict Studies.

The Serbian government has officially apologized for Srebrenica and no one can condone or explain that situation. We are ashamed of it.
But, the other two sides have not apologized for the many Serbian victims of Bosnia in fact the majority of the victims were Serbs. How is reconciliation supposed to occur when people keep denying your losses and suffering?

Serbs are not denying what happened in Bosnia but we are simply asking that our victims be recognized as well. Sir, I might be mistaken but you were not there. You did not see your cousin being dragged by a car through your city wrapped in the Serbian flag or have your uncle, who was mentally ill already, be tortured by the Croats simply because he was a Serb. We are not denying that Serbs did not commit atrocities all we are saying is so did the Muslims and the Croats. If you are in fact interested in reconciliation and transformation of the conflicts in the Balkans perhaps you will consider looking at the links that I have included here.

All three sides in Bosnia need to come together and reconcile and transcend the situation in order to improve their lives. This needs to be done in Kosovo.

But can you not understand why Serbs are skeptical of Kosovo Albanians promise to keep churches in buildings in tact when they see their churches burned and Death to Serbs written over the doors of the holy places? Check out youtube and video's such as Serbkilla and understand our fear.
The Albanian population has suffered and so has the Serbian. The elites will leave but the civilians will remain and the focus should be on helping them.
Independence will not solve problems of drug trafficking, smuggling or corruption. Kosovo will remain Serbian in our hearts.

All the best to you. I hope more children do not have to experience what many of those young individuals in that crowd in Toronto have had to…

That is our hope.

Please watch this about Bosnia- done by American journalists
http://www.youtube.com/watch?v=SabukNnhuSg&feature=related

Hi anonymous...thanks for your comments. I don't have much time to respond for the reason I explained in my last post. :(
But I appreciate and respect what you have to say. I'll say more when I get back. But all I'll say for now is that I have a lot of respect for the Serb people. As I mentioned in my post I am aware of your long history of suffering and resistance. I know that the Serbs have been victims of atrocities and everybody in the region has blood on their hands. I just maintain that Srebrenica was in a class of its own. And I don't see how you can escape the consequences of history. But I am for any solution that can bring about reconciliation one day. I should also add that, if you'll excuse me, the Serbs are bigger than their monuments in Kosovo. You have your huge victories in the First World War...where you were also the first atrocity victims. You have your history of resistance against the Nazis. While others in the region collaborated with them. You have your long history and culture. I would like to see you move forward into the future and become the great modern country you can be.
Anyway....I have to run for my appointment with fate. But I thank you again for your very good comments, and when I get back we can resume the conversation. :)

one more thing...I'm glad we have such a proud and passionate Serbian-Canadian community. This country needs all the passion it gets. So don't be discouraged. :)