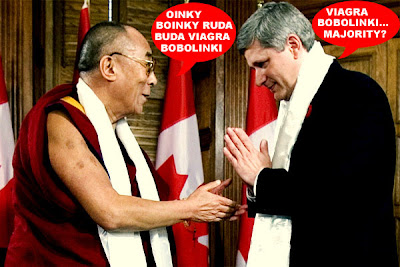 In a thinly veiled slap at U.S. congressional Democrats who oppose a trade deal with Colombia until the country's rights record improves, Canadian Prime Minister Stephen Harper used a trip to Bogota to present himself as a steadier ally.

"We are not going to say fix all your social, political and human rights problems and only then will we engage in trade relations with you. That's a ridiculous position,"

Or dig up the rotting remains of the Court Challenges Program. The one that was designed to protect the human rights of CANADIANS.

(2) STEPHEN HARPER TRIES TO DO EVERYTHING GEORGE BUSH DOES?

Gawd...I hope not. I LOVE living in one of the richest countries on earth.

(4) STEPHEN HARPER IS A SECRET BUDDHIST.

Wrong. Great Fat Leader is a secret born again CHRISTIAN fanatic...who belongs to a weird sect that believes that daddy knows best ...gays are an abomination....America is beautiful....and the world could end TOMORROW.

Why do you think Stephen Harper announced his insane War on Drugs at a SALVATION ARMY office in Winnipeg?

And why do you think he appointed JAKE EPP...the head of a Christian College and a notorious homophobe....

"What is needed is not protection for homosexuals, but for Canadians who are not deviant."

To of all things the rigged panel on Afghanistan.... on the eve of an election?

Stephen Harper is trying to mobilize his demoralized religious wingnut base...by sending out coded messages that if they help him get a majority, religion will be BACK....with a vengeance.

But of course he has to be discreet. Because now he's a MODERATE....and has no HIDDEN AGENDA. Right?

So Jason Kenney, his ambassador to the wingnut court, has been very busy secretly promising religious groups a glorious New Day in Canada. From a Defence of Religion Act ..... to a promise that faith-based agencies will get the lion's share of government subsidized charity work.

So they can make life hell for gay kids in our schools . And shove crazy religion down the throats of poor Canadians along with their supper.

If you love freedom...and you believe that religion should stay in churches and temples and OUT of public life.

And if you love Canada and our precious Canadian values. You better be ready to fight for them...and soon.

Because crazy religion is coming our way...
Posted by Simon at 11:02 PM

I was actually wondering why Harper would meet with the Dalai Lama – as although he does mimic Bush - Harper strikes me as a rather shallow being, unlike (my impression of) the Dalai Lama.

From this site (excerpts)

“ .... Lay Buddhists (those who live outside the monastery) are expected to adhere to Five Precepts, the third of which is a vow "not to engage in sexual misconduct." But what is sexual misconduct? Right and wrong behavior in Buddhism is generally determined by considerations such as the following:

• Universalibility principle - "How would I like it if someone did this to me?"
• Consequences - Does the act causes harm and regret (in oneself or others) or benefit and joy?
• Utilitarian principle - Will the act help or harm the attainment of goals (ultimately spiritual liberation)?
• Intention - Is the act motivated by love, generosity and understanding?

"Sexual misconduct" has thus traditionally been interpreted to include actions like coercive sex, sexual harassment, child molestation and adultery. As Homosexuality is not explicitly mentioned in any of the Buddha's sayings recorded in the Pali Canon (Tripitaka), most interpreters have taken this to mean that homosexuality should be evaluated in the same way as heterosexuality, in accordance with the above principles.

A Buddhist author of an article on homosexuality concludes:
In the case of the lay man and woman where there is mutual consent, where adultery is not involved and where the sexual act is an expression of love, respect, loyalty and warmth, it would not be breaking the third Precept. And it is the same when the two people are of the same gender. Likewise promiscuity, license and the disregard for the feelings of others would make a sexual act unskillful whether it be heterosexual or homosexual. All the principles we would use to evaluate a heterosexual relationship we would also use to evaluate a homosexual one. In Buddhism we could say that it is not the object of one's sexual desire that determines whether a sexual act is unskillful or not, but rather the quality of the emotions and intentions involved.

It is also worth noting that Buddhism does not traditionally place great value on procreation like many western religions. From the Buddhist viewpoint, being married with children is regarded as generally positive, but not compulsory (although social norms in various Buddhist countries often have different views). “

“In a 1993 talk given in Seattle, the Dalai Lama said:
nature arranged male and female organs "in such a manner that is very suitable... Same-sex organs cannot manage well." But he stopped short of condemning homosexual relationships altogether, saying if two people agree to enter a relationship that is not sexually abusive, "then I don't know. It's difficult to say."

The Dalai Lama was more specific in a meeting with Buddhist leaders and human rights activists in San Francisco in 1997, where he commented that all forms of sex other than penile-vaginal sex are prohibited for Buddhists, whether between heterosexuals or homosexuals. At a press conference the day before the meeting, he said, "From a Buddhist point of view, [gay sex] is generally considered sexual misconduct." But he did note that this rule is for Buddhists, and from society's viewpoint, homosexual relationships can be "of mutual benefit, enjoyable, and harmless."

The Dalai Lama is well known for his activism for human rights, and this specifically includes equal rights for gays. According to an Office of Tibet spokeman, "His Holiness opposes violence and discrimination based on sexual orientation. He urges respect, tolerance, compassion, and the full recognition of human rights for all." “
_____

It appears that homosexuality is not an important issue (one way or the other) in the Buddest faith.

On this the two men differ.

I can't imagine that Harper had much interest in meeting the Dalai Lama before he entered the political arena. I suspect that Harper does want to have Canada combine religion and politics (as you say) (help) - but not in a Buddest value system.

blech, and now all the christian steve groupies will be going around saying what a great ecunemical man he is and blah blah blech.

of course the budists here won't buy it, they know how clever the dali lama is and no doubt eeked out a few harper promises about china.

i wonder if he walked on steve's back?

Bingo. His Holiness is a political tool to Harper and nothing more. Such a shame.

If we only knew what's really going on behind the scenes, Harper's fake popularity would go up in flames. Don't think for a moment that the entire agenda of the christian right homophobes that Canada's new gov't really is is not ready for roll out when the majority calls. Where is the fucking opposition in this country?

Wait till Harper wins his beloved majority and pulls off his fake head and shows us the reptilian tentacles and sharp teeth...thanks for the heads up guys...ooops...gotta go...I didnt clean my room and my moms pissed.

I am glad some one is telling what I always thought The Dalai Lama is a worldclass KOOK..
Anybody with intact sense for decency and moral compass would say all what he is" teaching"

there is NO NOVELTY HERE ..
Another religious nut lusts for POWER
has a sheltered life doing no work for his keep and he is laughing all the way to NIRVANA,..

Clever I must admit..