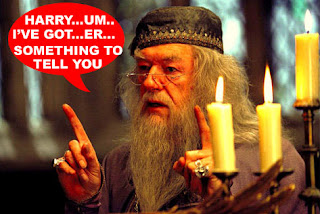 I've been trying to avoid the ridiculous tempest in a broom closet caused by J.K. Rowling's outing of this old wizard. But as I was racing up Yonge Street this morning... to buy a part for my computer.... who did I come across but J.K. herself!!!

Ok ok .....I didn't actually SEE her...just gazillions of her little fans...filing into an old theatre where the billionaire writer was going to read from her latest book.

Which is just as well because if I had come face to face with her I would have had to admit that I haven't read ANY of her books. And I've only seen ONE of the Harry Potter films and it was.....um.....ok.

But seriously...if I HAD bumped into her I would have thanked her for getting kids to stop texting so much and actually read books again.

And for making a gay person part of her fantasy world....just like they are part of the real world. Because if the inclusion of ONE gay character in a story can cause such a fuss we've obviously got a PROBLEM.

I also would have offered J.K. my hearty congratulations for whipping up the religious wingnuts.

At last the author, a Ms. J.K. Rowling, revealed the revolting truth: Dumbledore is a gay homosexual who doesn’t deserve to live on G-d’s green earth. Not only was Rowling obviously pushing Satan’s agenda, she was pushing the homosexual agenda as well.

So they could expose their dirty parts in public again....and show everyone what sicko homophobes they really are.

And oh yes....I also would have told J.K. to ignore this gay fool.

We can only conclude that Dumbledore saw his homosexuality as shameful and inappropriate to mention among his colleagues and students. His silence suggests a lack of personal integrity that is completely out of character.

Like a lisping weakling, Dumbledore is a painfully selfless, celibate, dead gay man, so forgive me if I don't see Rowling's revelation as great progress.

First of all what DID he expect the old headmaster to tell his students....that Grindelwald was his gay lover....but he turned into a Nazi....so he had to kill him?

And secondly does he really suggest that since the old wizard doesn't live up to his view of a gay character....we're better off having no gay character at all?

We are now all free to imagine a gay life more whole and fulfilling than the one Rowling gave Dumbledore. But it would have been better if she had just left the old girl to rest in peace.

Hmmm.... or maybe it would be EVEN better if the fool got a life...and gave his hysterical wankery a rest.

The fact is the whole silly controversy WILL give parents a new way to introduce the notion of homosexuality to their children. Not in the absurd way the gay fool thinks they should. But in a gentle way made for kids.

Because teaching tolerance to children is one of the greatest things you can do for them.

J.K. Rowling just made that a little easier.

If you read it, make sure to read all of the 7.

Hi Sassie!! Yeah I saw that article...I thought the end was sweet...and I liked the bit about how the Wiz was a champion of everything from werewolves to mugglewhatevers. But as for gay I never woulda figured it. Maybe the hat...but definitely NOT the beard!! :)

Nobody picked up on it and JK mentioning it in passing after the final book is published seems a little strange, there’s really nothing to read into it. I watched kids being interviewed on TV about it and to them it was no big deal, doesn’t make any difference to them. He’s gay, so what?

(emphasis mine)
" .... kids being interviewed on TV about it and to them it was no big deal, doesn’t make any difference to them. He’s gay, so what?"

out of the mouths of babes. If only (some) adults would listen, really listen.