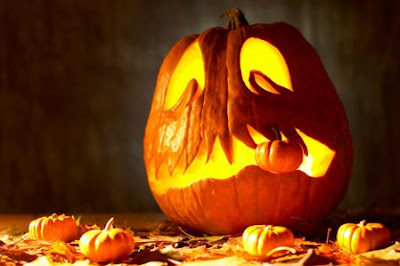 It's the night before Halloween and not even a miserable carved pumpkin is stirring in the bunker. For some reason...and remind me NOT to think too much about it...the Pagan Festival doesn't seem to be as popular with the French guys as it is with the English ones.

And the worse thing is I can't even go OUT and party. I busted up my foot playing soccer on Saturday and I'm hobbling around on crutches.

Oh well. At least there are all those Halloween movies on TV....

I'm not really a big fan of horror films.... but when I saw this list....and being bored out of my mind...I thought I'd come up with my own TOP 5 SCARY MOVIES.

This movie is a recurring nightmare....and a GAY one too!!! My friends don't think it's THAT scary. But how would YOU like being wooed by Aaron Unruh?

Why is he ALWAYS coming after me ? And is he wearing a hockey mask or is that his real face?

Seriously now...I think this horror movie had the biggest influence on my life. I used to LOVE to swim in the sea at night. Now I don't dare....not even in Lake Ontario. Which is just as well. Because if the Big Eel doesn't get you...the toxic chemicals will.

This was also a seminal movie. I never take a shower in a hotel without locking the door.
Especially when Sébastien is in there with me. I'd hate to have the Jamaican maid come in....and start screaming...or praying for us..

I don't know why of all horror movies this one really gave me the chills...instead of just shocks. It certainly wasn't Jack Nicholson...he just made me laugh.

Maybe it was the scene when the wife comes across the typewriter with the same sentence typed over and over again. That was pretty scary. Writer's block always is.

Or maybe it was this scene....

Wow. Still as spooky as when I first saw it.

And the little tricycle does remind me of another REALLY scary story I read the other day....about a guy who loved his bike too much.

Although that does give me an idea.

Guess what I'm going to give that old homophobe Aaron Unruh for Christmas this year?

Happy Halloween everyone!!
Posted by Simon at 10:12 PM

Yer on crutches?! Simon! Take care of yourself, and have a good BOO! day.

With a little imagination you could take your situation and make a costume out of it. You know, lemons, lemonade, that shit.

Most horror movies don't do much for me, but the Shining worked, love that movie.

Hi JJ! I'm miserable. It's 18 degrees out there and I'm stuck in the house!! But I suppose in a way I've already had my Halloween. Four and a half hours in the emergency department of St. Mikes...on a Saturday night...was scarier than any movie. I especially liked the old wino who vividly described how his buddy cut him up with an exacto knife...ugh :(

Hi Bruce!! You mean rent a wheelchair, dress Sebastien up as a nurse...and have him push me around? I'd LOVE that...but since he's been walking the dog...doing ALL the chores...and at least until today bringing me breakfast AND dinner in bed. I don't dare ask him :)
As for the Shining I agree. I think it was the spooky atmosphere of the big empty hotel that really scared the shit out of me. I think the scariest horror movies for me are the ones where you don't see the monster...you just know it's there ...and your imagination does the rest...

Dude - the NDP is making noise about voting tomorrow afternoon in such a way that might bring down the House!

It’s so true that the scariest monsters are the ones you don’t see, like most homosexuals to some people, Ooh, Booga Booga!

You gave me a visual of Sebastien pushing you around in a wheelchair that is REALLY scary. Get yourself well my dear. That’s what you get for being so butch. :))

I had a friend who after seeing the original PSYCHO film would not take a shower unless, the shower curtian was clear or class.

The Shining did to for me! Until this day I refuse to stay in an abandoned hotel :)

Sorry to read about your foot Simon, hope that with a little time and Sebastien's continued TLC you will mend soon.

Hi Jay! Only in their dreams...with the Liberals hanging on for dear life...this monstrous horror show continues...

Hi Bruce!! Yes Sebastien dressed up as a nurse is a SCARY picture. At least I'd be too scared to suggest it!!
As for being butch...well SOMEBODY in this city has to be...or the bottoms would be bitchin even MORE than they already do...;)

Hi Sassy!! Thanks...I'm doing great...now I just use the crutches when the other guys are around so I don't have to do the chores!! As for Psycho...yup...I have to admit I really do lock the door when I'm in the shower...even when I'm alone in my OWN house. Because one thing Kerouac ISN'T.... is a guard dog... :)

Oh...one more thing. I think this the WORST post I have ever written. I tried to improve it several times...but couldn't. I want to apologize for traumatizing everyone...including Aaron with the bicycle story. Blame it on four days of being confined to the house...while the weather outside was so good...
Although I do want to add that if I can find a more classy way to insult Aaron...I will... :)

SIGH. Dion could have been so much more...I really think that...but, well, you know.

It's wierd to hear "class" and Aaron in the same sentence. Scary even...and on Halloween? hehehe