Turning a Torture Centre into a Memorial 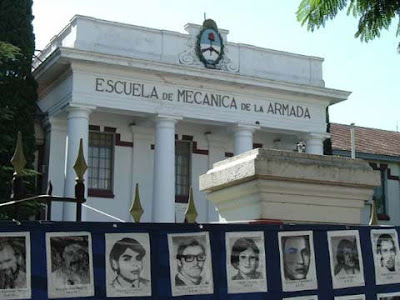 It's a beautiful white building. But if its walls could talk they would scream. Or just run with blood.

It's the Argentine Navy's Mechanic School. For years it was brutal torture centre and death factory.

Now it's going to be a memorial museum.

An estimated 5,000 people are thought to have been tortured and killed there in the late 1970s to early 1980s.

Most were tortured and never emerged alive, their bodies dumped from planes into the nearby River Plate.

If that were not grim enough, the building also served as a maternity centre where babies were taken from their mothers and given to childless police and military couples.

The mothers were then usually killed.

I wonder if any of those poor people ever imagined that the building where they were so brutally tortured and then murdered would one day become a memorial to them.

And not just to them but to the 30,000 or more people who were murdered during Argentina's Dirty War.

I'm glad some of those dirty bastards are being punished And the Nazi crimes of the Catholic Church continue to be exposed.

I'm glad Argentinians are going to have a place to remember all those who disappeared into the fascist killing machine..... leaving only the memories of those who loved them ....and those black and white photographs to stare at us and horrify us forever.

I'd like to think that if I ever visit Argentina again that's the first place I'd visit.

But after that afternoon in that musky crypt in that leafy cemetery, I honestly don't know if I could.

You see I HAVE to believe that humanity learned something from the Holocaust. That we're better than that now. That it could never happen again.

and in a place like north america - you can't.

dear me, i think i'd fall to my knees and break down visiting that building. i was a complete sobbing, hardly-able-to-walk mess coming out of the che guevera memorial in cuba.....but so was the man behind me.

thanks for bringing this up, simon, argentina and so many other countries have a long way to go in the healing process.

II have just commented on over at lept’s so will not repeat myself but to add that … when I first visited Buenos Aires in ’87 I sat and watched (in what felt like a state of disbelief) the Madres de Plaza de Mayo on their weekly silent protest of the disappeared. The vision of the white triangular pieces of fabric with the names of their disappeared daughters and sons on them, strung throughout the Plaza de Mayo (some mothers wearing them like scarfs, still haunts me today. On my most recent visit to BA, the Madres were not in the Plaza - my memory of them was.

Justice late (many mothers died without seeing this and many offenders never held accountable before they died) but at least some justice, perhaps some closure for some.

What would be enough justice - only that this had NEVER happened!