Larry Craig and the Toe-Tapping Pig 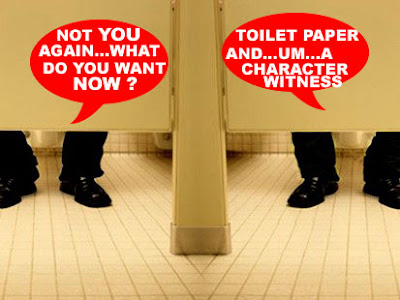 When I heard that the toe-tapping Senator Larry Craig had decided NOT to resign.... at first I was disgusted.

I just wished that somebody would give this miserable closet queen bigot a length of rope...so he could hang himself from a hook in a toilet stall.

But then...after thinking it over some more...I changed my mind.

Fuck the hook... it's so much better and more satisfying...to hang him around the neck of the Republican Party.

By the time Larry's finished with them they'll be so desperate to get rid of him...they'll probably offer to blow him....or rim him....or ANYTHING....as long as he goes.

Which I think we can all agree will be a REALLY good show. Especially when they tell him to blow. And he doesn't.

Besides....if you want even MORE evidence that Larry's misfortune is somebody else's good fortune...

Check out this ad, where a group of socially responsible doctors use his example to warn Americans about some other toe tapping pigs...


OMFG. Oink. Oink. Just when you think America can only get more beautiful. It doesn't.

Never mind the burgers and the bacon and all those fat kids.

You don't think Larry PAID for it...

As a special treat....before I blow this town...one more cultural story from south of the border. Britney Spears doesn't like Chris Crocker.

“She thinks he's creepy and that all his videos are an obvious attempt at fame. She finds it insulting and difficult to watch."

And as for Chrissy....will his fifteen minutes of fame ever end?

But wait. It gets worse. Roseanne Barr says she wants to be Britney's MOTHER!!!

And Craig continues to smear the LGBT community voting against every bit of legislation that affords some dignity in a society polluted with racism, homophobia and stupidity. I hope he stays on, the republicans deserve every hypocrite that will hang on.

Hi Scout!! Yeah isn't the U.S. a mess? The graft, the corruption of the political process...compared to that Larry's little scandal is NOTHING at all....

Yeah that's what I absolutely can't forgive him for. I'd feel sorry for him otherwise. But voting against your own kind...putting your self loathing before your principles...is simply unforgivable. And of course if the Republicans weren't so homophobic and preachy...they wouldn't be stewing in their own foul juices now. So serve them right!!

Hi JJ!!! oh thank you I was simply dumfounded. I mean I'd practically PREDICTED it the night before.But I suppose it was obvious so WTF? :)