Is Donald Trump Medically Fit To Remain In Office? 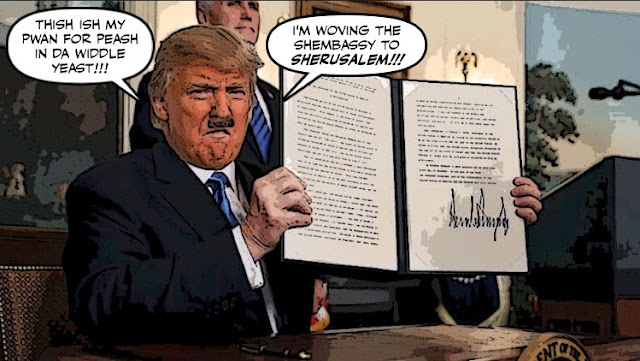 It was like the happy part of a nightmare, if you know what I mean. Brief but welcome.

As I watched Donald Trump set fire to the Middle East.

Just to pleasure his rabid religious base, and Daddy Big Bucks Sheldon Adelson.

And of course, to try to distract Americans from all his legal problems.

Trump started slurring his words, and for a moment I thought he was having a stroke.

Apparently he only lost his teeth. 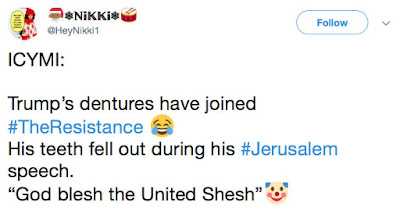 I say apparently, because the White House claims that the president's health is not the nation's business.

Unless you're running against him, and you're Hillary Clinton...

Even though Trump is seventy one, his lifestyle is not ideal... 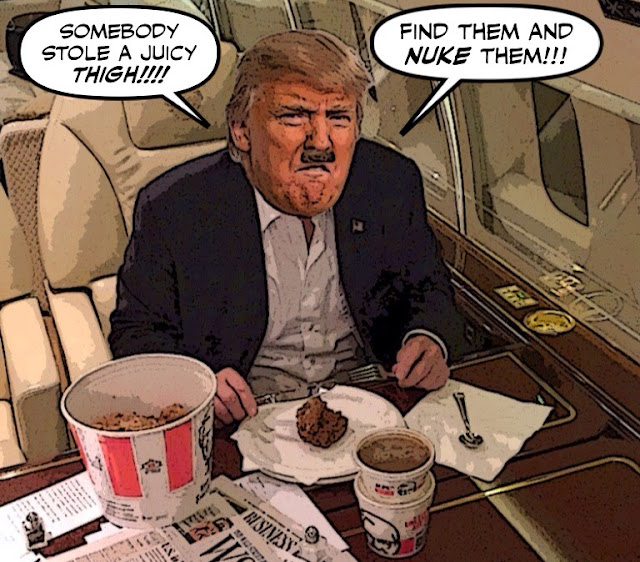 And many Americans, like his one time friend Joe Scarborough, believe he is losing his mind.

Donald Trump spent much of 2016 questioning his opponent’s stamina to be president of the United States. But it is now Trump’s own fitness that is being scrutinized by friends and foes alike. After Trump spent recent weeks creating a level of chaos unseen around the White House since Richard Nixon’s resignation in 1974, Capitol Hill politicians and media outlets are quietly questioning whether Trump is fit for the highest office in the land.

And of course the timing couldn't be worse eh?

The president’s meltdown could not come at a more perilous time. For months now, national security insiders have been fretting about the possibility of war on the Korean Peninsula. But administration sources admit their greatest fear is their own commander in chief’s instability.

Because if Trump goes, and starts the Third World War, we ALL go.

And what I find just as scary as his mental state, is how dumb he is.

The secretary of state reportedly called the president a “moron.”

The national security adviser allegedly said Trump has the mind of a “kindergartner.”

National Security Adviser H.R. McMaster mocked President Trump’s intelligence at a private dinner with a powerful tech CEO, according to five sources with knowledge of the conversation.

The top national security official dismissed the president variously as an “idiot” and a “dope” with the intelligence of a “kindergartner,” the sources said.

And if you don't believe Tillerson or McMaster, just watch this video:


And I think you'll agree that's too dumb to be president.

And three years ago Trump asked a question all Americans must now answer:

And the answer better be yes.

Labels: Donald Trump, Jerusalem fiasco, The Madness of Trump, The Rise and Fall of the Orange Oaf

You left out the heavy sniffing Simon. With that, the cotton mouth and the jaw moving around uncontrollably, he reminds me of someone I knew who had a serious cocaine problem.
Given that President Sniffles has displayed this on numerous occasions I'd bet that his hectic pace is enabled by the use of dummy dust(cocaine).
Given that and his continual shovelling of junk food down his gullet I'm guessing the old Trump ticker is chugging and sputtering and will soon conk out and then, America will be great again.
JD

McDonald the Clown's fast-food diet is probably only accelerating his demise. His father died of Alzheimer's and so, as we all know, did Reagan. The filmmaker of Super Size Me became suicidally depressed after eating nothing but processed junk from Mickey Dee's for 30 days. Scientists have actually studied the chemical composition of the "special sauce" and other elements of the Standard American Diet (aptly abbreviated to SAD!) and come to the conclusion that it's more addictive and damaging than crack, not only to the intestinal and endocrine systems but the brain. Which is fitting, in that Trump's favorite chaser "Diet" Coke (which is actually worse than regular Coke in that the put even more chemicals in it to suppress or dilute whatever empty calories are in the "classic" version) is so named because the original formula was derived from the plant that makes cocaine. Michelle Obama was pilloried for pointing these things out (and for other, obvious reasons). But all she and Jill Biden (the then-VP's wife who is an actual pediatrician) were trying to do was to stand up for the best interests of the Stubborn American Diabetics. SAD!

It's not the responsibility of a world leader to stage a mental health intervention on the president of the United States. But considering that one of the top priorities of advocacy in the Trudeau family is mental health awareness, perhaps Justin could give President Royale avec Fromage a nudge to have himself checked out when they meet yet again in January for the next exercise in futility that is the NAFTA talks. Margaret herself said in October that "one candidate in particular" (she used the pronoun "he," which Hillary of course does not "identify" as) appeared to be on the edge of a breakdown and needed to address his emotional well-being, not only for his own sake and that of his family but especially the country.

Sophie does awareness campaigns for eating disorders, having herself suffered from bulimia in high school. Donald appears to have one of his own -- "stress eating" -- an addiction to fast food as a self-medicating vice for preexisting conditions, in the same manner that his troubled brother became addicted to booze and died of alcoholism. Sophie also does yoga for integrative wellness. Donald doesn't believe in exercise at all (except golf, which he plays poorly if he does anything at all on the greens) because he believes it "saps your energy." At the very least he could learn a sun salutation, even if he does nothing else but salute the self-deified "sun god" in the mirror every morning.

Donald likes Justin (because Justin is a better actor than the cons give him credit for, and plays the role of snake charmer exceptionally well), and at this point is probably so "covfused" that he thinks he's one of his sons. Maybe he could be the one to at least drop a hint that the old man needs to have the car keys (or the Twitter phone) taken away, and ought to be on a couch talking to a psychiatrist instead of in the executive chair for the most powerful corporation in the world. (Ironically, the one that expanded McDonald's into a global empire of the Golden Arches, just like they've expanded so many waistlines. SAD!)

I was really pissed when I found out he's going to move the embassy. Is he trying to get people killed? Who cares what the wacky Evangelicals think... This has Kushner written all over it too.

Kushner will bring peace to the middle east. it will be a very orthodox peace with many dead bodies

You mention Reagan and you answered your own question.

I see very little difference in America no matter who is in charge. Some stuff on the margins which to paraphrase George Carlin, is not all that important to have 100 pronouns when you have three media companies.

hi JD...you're right, thanks for reminding me. I must be losing my mind too, because that's the first thing I noticed. And I actually wondered whether Trump was doing coke at his age, and whether it could kill him. And the more I thought about it, I couldn't think of a happier ending... ;)

hi Jackie Blue...I have to be careful when I criticize anyone for eating too many hamburgers, because I'm afraid I've had far too many myself. But there's something about that picture of Trump, with a whole bucket of fried chicken in front of him, that gives me hope that they could wheel him out feet first before he kills us all. As for getting Justin to pose as his son that sounds like a brilliant idea. Trump is having more and more trouble telling people apart, and there's no telling what Justin cold make him do. Like convince him to step out on the balcony of his penthouse, and convince him he's so great he can fly... ;)

hi anon...yes unfortunately Trump needs some kind of "win" for his base, Netanyahu needs a win too to distract Israelis from all the corruption swirling around him, and Kushner has to do something to improve his image before Kushner arrests him. And yes, as you point out, people will be killed but Trump and his mob couldn't give a damn...

with the diet Trump has, you'd think he'd have had a heart attack by now. alas, it is not to be.

it is doubtful he is "crazy" enough to pull out of office. Its just the way he is and there are millions more just like him and not just in the U.S.A. I know Simon has written enough about Scheer and if he were P.M> just how different would we look from the U.S.A.