Now Can We Call The Cons The Rebel Party? 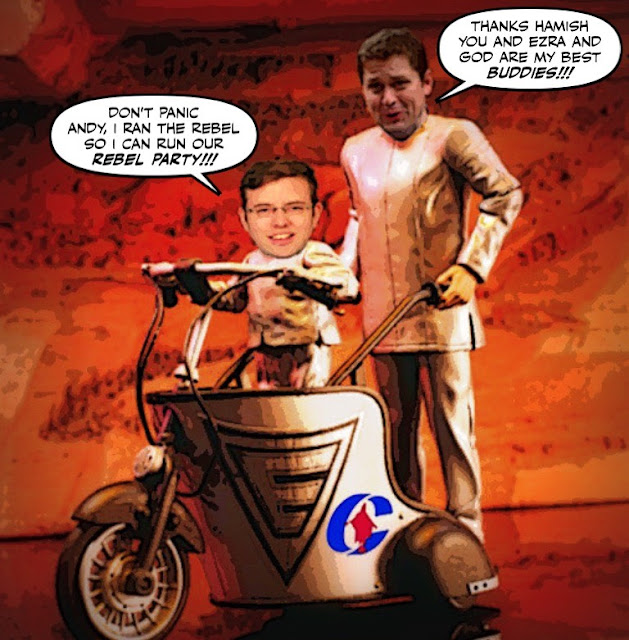 For months I've been warning that Andrew Scheer aka Schmear or Schmeagol, is a religious fanatic and a right-wing extremist.

And that along with his mini-me Hamish Marshall, is trying to turn the Cons into the Rebel Party.

And now there is more evidence of that. 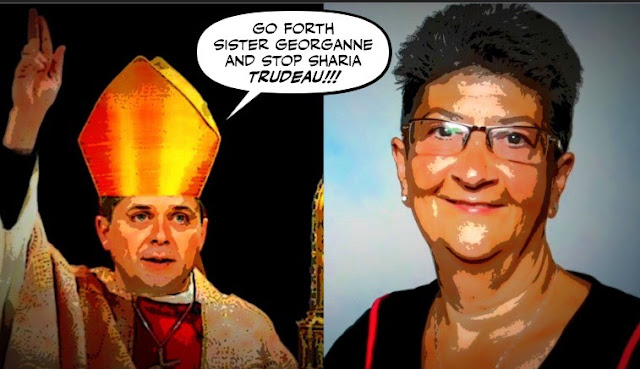 With yet another member of his inner circle revealed to be an anti-Muslim bigot.

A senior member of Andrew Scheer’s leadership team helped create an anti-Islam organization during his campaign to lead the Conservative Party. Now, that organization is holding events to protest anti-Islamophobia Motion 103 and is bringing together Canada’s anti-Islam pundits and anti-Muslim groups.

Georganne Burke, the Scheer campaign’s Outreach Chair, was involved in the founding of Canadian Citizens for Charter Rights and Freedoms (C3RF). The group warns that the Liberal government is criminalizing criticism of Islam and opening the door for a Sharia (Islamic) takeover of Canadian law.

And both Marshall and Scheer running for cover. Again... 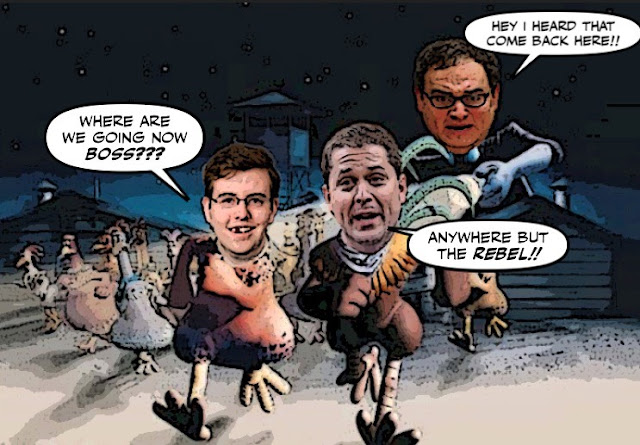 But as the old saying goes, they can run, but they can't hide.

Not so soon after Scheer proudly introduced his handpicked MP Dane Lloyd to the House of Commons.... 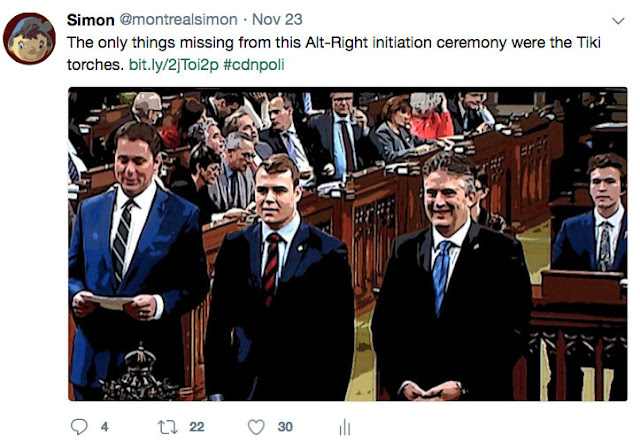 A man whose Twitter slogan is "Fear God, honour the King."

And is an Alt-Right goon, who has called feminists "feminazis."

Not after Georganne Burke is seen here claiming that all the women who say Trump sexually assaulted them are lying...

And not after Lisa Raitt promoted a Rebel-like smear site...

Which as I told you the other day, mysteriously disappeared less than a day later.

And has many progressives wondering why our useless Con media doesn't seem to be interested in covering this story.

Even though it's another clear sign that the Conservative Party of Canada is slowly being taken over by Alt-Right extremists, more Trumpkin than Canadian.

Another sign that we could soon be flooded with so-called "fake news."

And there isn't a bigger story in Canada.

But that's OK, soon the story will become too big to ignore. And even Con fluffers like David Akin will be forced to cover it... 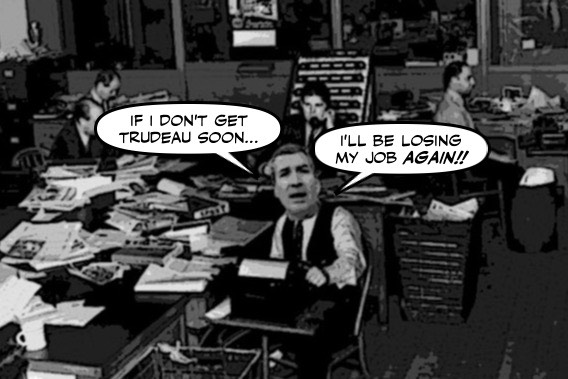 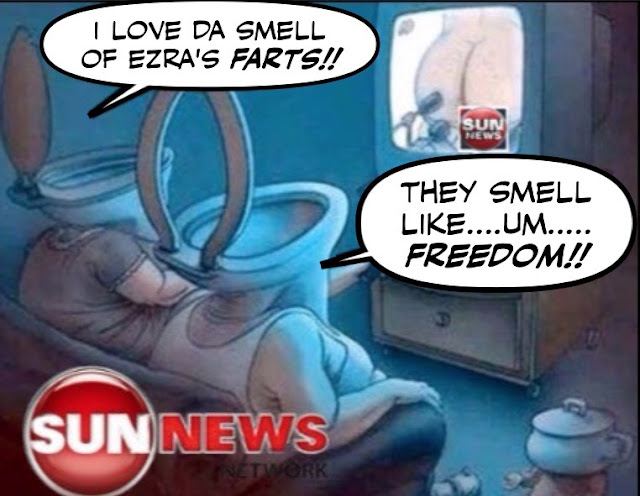 And knowing Levant they must have been some fumes.

But that story is just a desperate attempt to please his Con media bosses, and is simply pathetic.

And so are the Cons.

In just over six months, Andrew Scheer has managed to inflict so much damage on himself and his party they're starting to look like zombies... 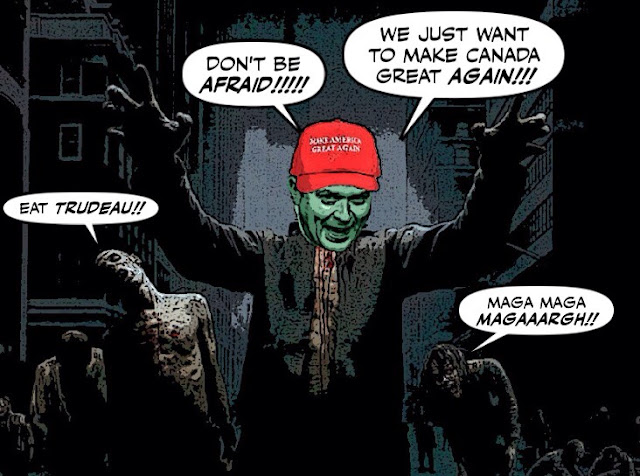 Their hidden agenda has been revealed already.

No decent Canadian could ever support them now.

And with a little luck, the Rebel Party will never ever rule this country...

David Akin stopped being a journalist long ago, and is just a car salesman for the Cons. So don't count on him or any other members of our bought media to do the right thing. We need to shame them publicly if we hope to make them less biased.

The Cons are just proving what we should have known since their ugly leadership race. They are the bigot party, and their chances of becoming the government unless they change their stripes are practically zero.

What's in a name Simon?
Georganne is an excellent example of what can happen to you if your parents stick you with a handle like that. By themselves George and Anne are fine names but together? Look at the result.
At first glance you might think she's a Sunday school teacher, a beloved aunt or a dear mother.
Instead we have an Islamophobic, Trump loving old hag who suffers from delusions and with a CV like that, it's no wonder that she's a perfect fit for the Schmeer campaign.
And yet another perfect reason why Schmeagol should never be allowed to run this country.
JD

I'll keep this short and sweet Simon, so as to avoid another unintentional bar fight like yesterday :\

Has Andy and the rest of his pigpen started squealing about the cancellation of the Boeing jets yet?

It must have something to do with the Muslim Brotherhood, or George Soros, or a backroom deal with Iran, or whatever crackpot conspiracy theory that Ezra and Hambone have recycled from Alex Jones or Breitbart or whomever.

It wouldn't at all have anything to do with Trump the bigly incredible dealmaker screwing up NAFTA, and Justin Trudeau standing up for the best interests of Canadians. No, we can't give him any credit. The Rebel party's favorite Muscovian candidate role model is bigly winning all the time...

'Hambone' Love it. Was hoping for Jackie Brown, but Jackie Blue will do nicely.

Hi Simon,
I don't know if they are real, but there are pictures of Scheer dressing up as a blue Santa? I mean how lame can you be if those are accurate?
Just another nail in the Conservatives coffin if true, they can't be gone soon enough, when will they learn?

The image of Scheer running around on a Ben Hur tricycle made my day. Whatever happened to the big bus Harper was so fond of throwing people under?
Although they have created a digital presence in the form of a dark labyrinth with smiling pop up clowns at every intersection directing people to the room of eternal light they have failed dismally in the real world. No Zombie crows wandering the streets looking for blood, no ISIS fighters murdering people in their sleep or business owners jumping of tall buildings,just a little rainy weather and people getting on with a relatively comfortable, supportive and progressive Canadian life. Hopefully the liberals can keep it that way and continue to make progress without falling into the trap of overreaching on wedge issues. We all know who wins once divisive politics becomes the norm.
RT

hi anon...thanks I will patent it immediately. I am open to other suggestions, but the reason I like that name is because it sums up what is really happening. The Cons, with the blessing of Andrew Scheer, are being taken over by an an alt-right cult with the same bigoted instincts as the Rebel gang...

hi anon...I agree with you, Akin is a veritable propaganda machine for the Cons. As I pointed out in my post he once worked as bureau chief at Sun TV, and old habits die hard. Plans are afoot for a boycott and other forms of protest, and I'll let you know as soon as they are finalized...

hi anon... I don't think anyone, except our grubby Con media, can fail to see what the Harper Party has become. The leadership race was awash with racism and dogwhistles, and Scheer's election has only made that worse. They went for what they thought was the safest choice, the guy with the permanent smile. Only to end up with Dracula himself....

hi JD...Lordy I don't know what the Gorgon did to deserve a name like that. But after studying her background, and seeing her pose with Stephen Harper, I think she represents well what the Cons have become. I only wish our useless bought media would wake up and realize the danger. For if Scheer and his ghastly gang should ever become the government we will be living in the darkest nightmare this country has ever seen...

Hi Jackie...don't worry about that heated exchange with those gun people, if it was a bar fight you won hands down. Believe me, I've had many trips to the OK Corral with those guys, and I never lose either. ;)
And I suggest the same will happen with those grubby Cons in your country and mine. They can yap as loud as they like, but they are running out of history, and sooner or later they will drown in their own excrement...

hi anon...yes, Hambone is pretty good. I had called him Ham Sandwich, but that's too long and too delicious... ;)

hi Pierre...yes I saw that blue Santa, and although I'm not sure it's Scheer, he was there, and it really is pathetic. I plan to use that in my next post, where I will discuss the latest polls. For if you look at those numbers, they help explain why the Cons are so blue... ;)