Roy Moore and the Rise of the Resistance 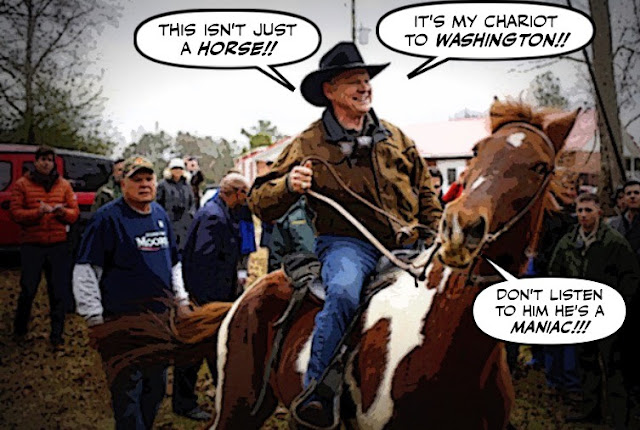 As you may know, the religious fanatic, and homophobic pervert Roy Moore rode a horse to the polls on the day of his Waterloo.

And the horse was not amused.

This is hilarious, his form sucks & that horse was thinking about bucking him pic.twitter.com/NLWfm8QtlY
— Molly (@Molly_Kats) December 12, 2017


And who can blame the poor Sassy?

For anyone who rides like that deserves to be thrown to the ground, or arrested by the SPCA.

But while Moore did end up badly, and looking like a horse's ass. 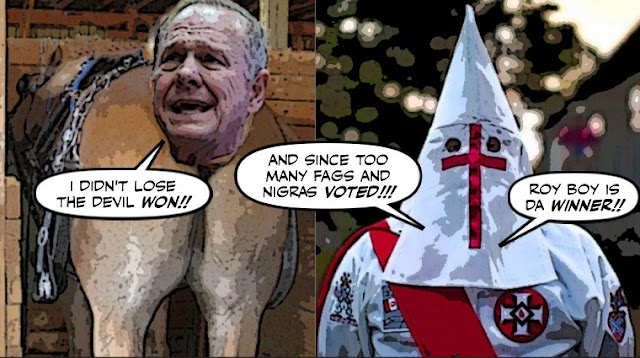 He's not going gently into the night. He's turning his absurd demand for a recount into a religious crusade.

A day after losing the Senate race in Alabama to Democrat Doug Jones, Roy Moore has issued a new statement refusing to concede the election. But it wasn’t your typical post-election statement.

It was a four-minute fire-and-brimstone video about abortion, same-sex marriage, school prayer, sodomy, and “the right of a man to claim to be a woman and vice versa.”

Where the degenerate pedophile gets to pose as a preacher, remind every sane person why Moore never should have been a candidate.

Remind us how much we owe to black voters.

According to CNN exit polling, 30 per cent of the electorate was African-American, with 96 per cent of them voting for Jones. A remarkable 98 per cent of Black women voters supported Jones. The share of Black voters Tuesday was higher than the share in 2008 and 2012, when Barack Obama was on the ballot.

And lastly but not leastly, remind us how the good people of Alabama embarrassed the hell out of Donald Trump...

For as long as Moore doesn't go gently into the night, the Democrats will be able to remind people that Trump endorsed that maniac... 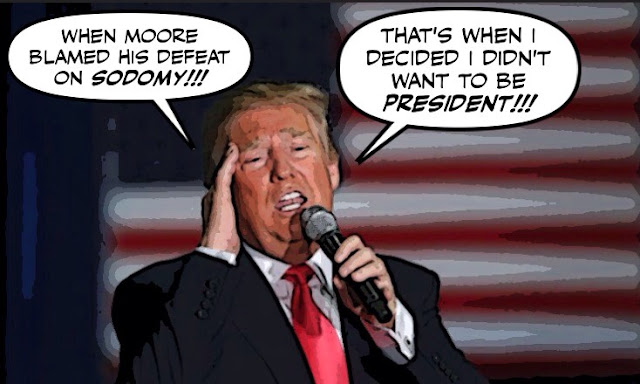 And that those who sow the wind usually end up reaping the whirlwind.

The political winds are shifting with all the subtlety of a hurricane.

Doug Jones’s defeat of Roy Moore in the Alabama Senate special election is yet the latest signal that the accommodators of Donald Trump, those who have normalized and bolstered him, the gutless, schismatic conservatives who abandoned principle to follow a pariah, will have hell to pay in 2018.

Yes, Roy Moore was defeated, but it can never be fully erased from history or memory that he was endorsed by this president and supported by the Republican National Committee. All of Roy Moore’s sins are their sins, and they will wear that scarlet R straight into the midterms.

For Moore and Trump's defeat is yet another sign that the Resistance is rising again and more confident than ever... 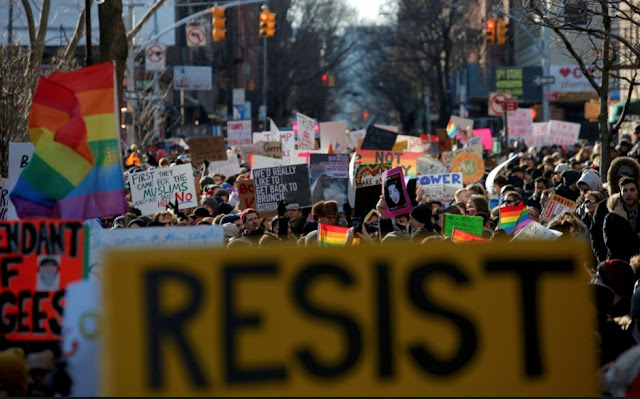 The Alabama win was just the wind the Resistance needed beneath its wings to feel the true expanse of the possible.

Republicans must brace for the reckoning. If the Resistance can maintain its intensity — and there is no sign of it weakening — the midterms may well amount to a purge.

The omens are good, the Resistance is strong.

And for this other perverted maniac, it's the beginning of the end...

I'm not surprised that Moore's refusing to concede. He doesn't strike me as a man who understands that "no means no."

The path to victory lies with registering and engaging black voters, not with a fraud socialist who thinks he can win over the disgusting white working class.

"Disgusting white working class"? See this? Progressives need to disavow this type of rhetoric, it only pushes people towards fascists like Trump.

That video of Roy getting sassed by Sassy is hilarious Simon. I only wish they had set him up with a horse named Bucky.
Game's over Roy. Time to move in to the old haters home where you can reflect on the good old days before the civil war with your buddies Bubba, Cletus and Fester. "Glory glory hallelujah, Roy will never ever rule ya!"
JD

Hi anon...yes that's true, and then there's the horrible possibility that he believes what he's preaching. In which case I can only hope that when he's out in the wilderness some bush catches fire, so he can carve another commandment into his granite block. "God says I should be Prezedunt." And we can then send him to the padded cell where he belongs....

Hi anon 10:53am...this is a very ugly comment and makes no sense. Progressives need the support of decent working class people, of which there are many, if they are going to defeat the Trump plutocrats. So please don't send another comment like that one, or I will delete it on arrival. Thanks...

HI anon 1:30 pm...yes you're absolutely right. And I apologize for publishing that comment. The holiday season is a terribly busy time for me, and I am so distracted I've been clearing comments without reading them properly. I'll be more careful in future...


Lets start on with the things

your partner is cheating on you

but in most cases

with six figure or

and that is the turth

Jesus may have existed

he may have been

but over the thousands

the way we are living

as humans is very

put in a mental hospital

So down here on

what should we do

can give the world

Hi JD....yes, as if it wasn't bad enough to have a pervert posing as a pious person, the idea of that bigot posing as a cowboy is the absolute limit. I was sent to riding school at the age of about five, and by the age of six I was a better rider than Moore. The way he jerked that poor horse around was a disgrace, and if he had tried that with a slightly friskier animal he could have been tossed on his ass. It's just as well he wasn't, or I might have died laughing...😀

He hurt Sassy's mouth. But why would be surprised that a racist, homophobic, misogynist pervert is also an animal abuser?

I told Livia how much she owes to Black women, although while she is a beautiful Black female she isn't precisely a woman, being a cat, not a human.

I agree Simon, the vast majority of working class people are decent because the majority of the working class are minorities who just want a better fucking world.
We need to stop treating the WWC like they are being fooled, they know exactly what they are voting for and they like it:
https://www.thedailybeast.com/fascism-runs-in-my-american-family

Hi Simon, I would be remiss if I didn't add that the way Roy treated Sassy was unacceptable. It was Sassy(the more evolved of the two) taking Roy for a ride that was rather amusing and ironically, a harbinger of how Roy's day was about to unfold.
Sassy for president!
JD

hi lagatta...You can see the look in the horse's eyes in the top picture, and in other shots he's holding the reins with both hands, so that bigot doesn't know what he's doing. And yes, that Roy Moores Hose Twitter feed is great. It's amazing how quickly a horse can put a human down with a kick from its back legs. I especially like the one of the guy pulling the horse's tail only to get a hoof in the face. They are very gentle animals, but there is only so much indignity they will take...

hi JD...yes in retrospect that was a harbinger of Roy Moore's day. I only wish I had been in the back room listening to what him and his advisers were saying about their next move. And no doubt praying a lot. How that corrupt gang can invoke the name of God to justify their outrageous behaviour is simply beyond belief...

hi Steve...well at least your poem ended on what seems to be an optimistic note. As you know I have always been very pessimistic about what Trump might do, so nothing he does anymore surprises me in the least. On the other hand I'm more optimistic about the power of love than you appear to be. I'm pretty independent, but I don't know how I could manage without love to keep me going, so I would work on that this holiday season....

African American women won this election for the democrats. Now they need to ensure the Republicans don't start messing even further with voter registration rights. We can expect to see major efforts to prevent people of colour voting.

A. 10:53 a.m. reads like one of those Russian type divisive comments which are out there, alive and well. comments such as this one are meant to "enhance" the racial divide. it would be interesting to see where it comes from, because there is a good chance it won't be coming from a Canadian reader, unless they are part of the attempts to cause a racial divide.