Michael Flynn and the Unravelling of Donald Trump 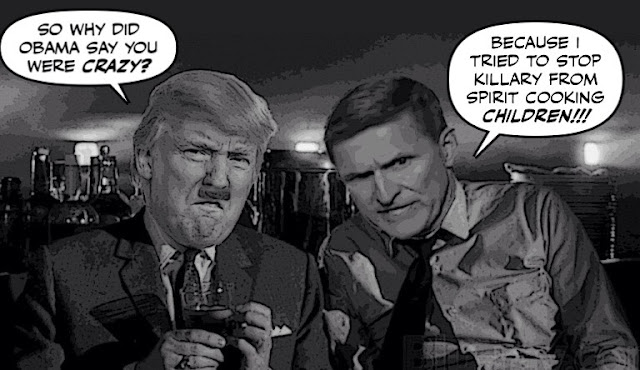 Two days after Donald Trump was elected president, Barack Obama warned him not to hire Michael Flynn for any national security job.

But Trump didn't listen to him, he made Flynn his national security adviser. 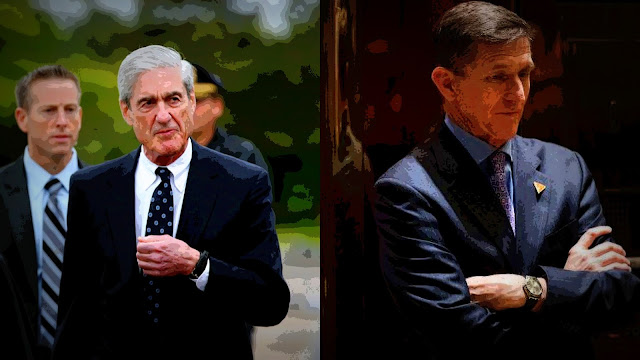 The fact that Robert Mueller has only charged him with lying to the FBI may be very bad news for Trump.

"[It] suggests a bombshell of a deal with prosecutors,” said Jens Ohlin, vice dean of law at Cornell, in an email. “The best explanation for why Special Counsel Robert S. Mueller III would agree to it is that Flynn has something very valuable to offer in exchange: damaging testimony on someone else.”

And one can only imagine Trump's state of mind, or wonder what he might do next.

Especially if the next ones to be indicted are his son Donald Jr, and his son-in-law Jared Kushner. 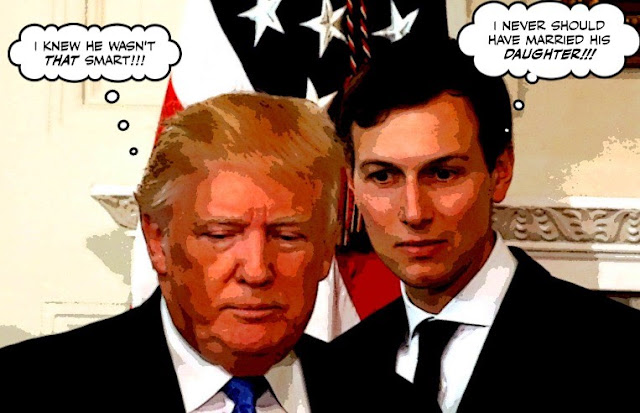 It is probably Mr. Kushner who is in greatest jeopardy now. Bloomberg has reported that he is the very senior transition member who directed Mr. Flynn to reach out to Russia. Mr. Kushner has already been questioned by the special counsel and by Congress. If he was one of those officials Mr. Flynn spoke to and he was not honest about it when questioned, he could face similar false statement charges.

And we are all left to wonder what might happen if or when Flynn points the finger at Trump.

ABC News has reported that Mr. Flynn will say Mr. Trump “directed him to make contact with the Russians.” If that is so, it opens a Pandora’s box of questions for the president. Is that a reference to the calls about the sanctions, or something else? How many times did Mr. Trump do that, when, and about what?

How can we square that with the president’s denials of knowledge about the Flynn contact with Sergey Kislyak, the Russian ambassador, or any contact with Russia? The possible answers range from bad to worse to fatal for the president.

At a time when Trump's mental stability is being seriously questioned.

We are currently witnessing more than his usual state of instability — in fact, a pattern of decompensation: increasing loss of touch with reality, marked signs of volatility and unpredictable behavior, and an attraction to violence as a means of coping. These characteristics place our country and the world at extreme risk of danger.

And he has never been more trapped or more dangerous... 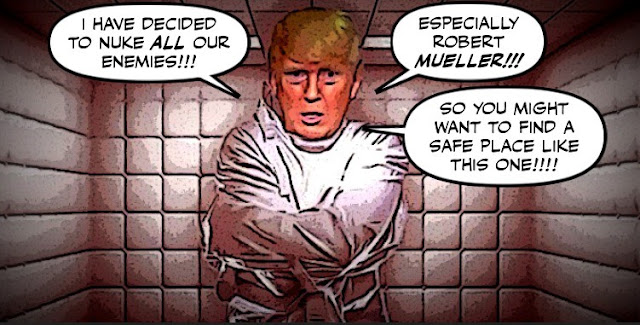 But at least now, the writing is on the wall.

The Trump story is now a criminal one.

Nobody can predict where it is going.

But with a little bit of luck it will have a happy ending... 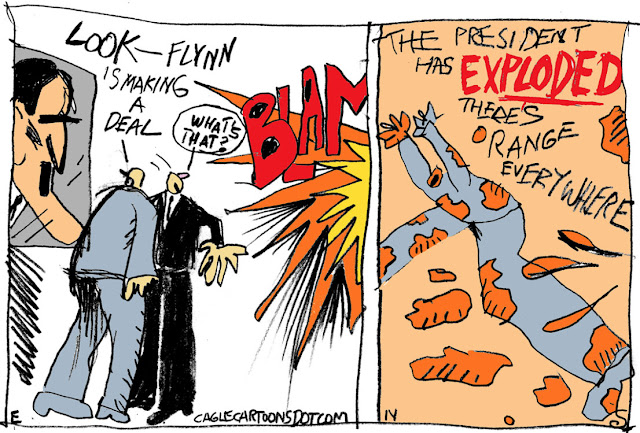 Hi Simon. Tonight I made an ORANGE pizza with bits of potimarron (red kuri) squash instead of bits of tomato. But unlike Trump it is both delicious and salubrious.

I love the way this story is going, but like you I am afraid what Trump might do when he's cornered. He's obviously suffering from either dementia or some mental illness, and even the Republicans should be able to see the danger. Impeach Trump now !!!!

Wouldn't this be a great Christmas Simon? Don Jr. and Kushner sitting by the Christmas tree while their kids ask about their ankle bracelets. Meanwhile, Ivanka hums Silent Night, thinking the lyrics as "Silent night, Holy night, I wish I was, Justin's wife...."
Yes, silent because Donnie Sr. is bouncing off the walls of his padded cell, completely bat shit crazy. Silent because someone close couldn't stay silent and all hell broke loose. Some you win and then there's Flynn.
What a great Christmas that would be.
JD

That rancid stench you detect from the other side of the 49th Parallel is a Reichstag dumpster fire spreading and igniting a row of golden port-a-potties. Otherwise known as the turd sandwich that is the Republicans' eugenicist, theocratic social engineering project masquerading as a "tax bill."

Trump doesn't even have to nuke the planet. He is irrelevant now that his own party just destroyed America from within. All in the name of the war god Mammon of their death cult of blood sacrifice and the holy profits. They have gutted every "nonessential" sector that doesn't directly benefit the elder sages Koch and Mercer -- education, healthcare, infrastructure -- everything, of course, but defense spending. The merchants of death must be appeased and must be allowed to hoard every single penny, lest a functioning nation-state that serves its ordinary citizens instead of its plutocratic tyrants be detrimental to quarterly earnings.

Trump doesn't even matter at this point. The billionaire demons and their willing minions squeezed that blood orange for every overvalued ruble he's worth. Now that they've got a guaranteed (if illegible) signature in Crayola sanguine red waiting for them, they don't need him anymore. They can throw him overboard on their luxury yacht and offload him to Mueller or to Putin who will be sure to call in his debts.

I have no sympathy for Trump. I do, however, worry about my fellow Americans who have become cannon fodder for these "ruthless aggression" no-holds-barred pugilists punching well below their economic weight class and deliberately entangling us innocent spectators in an unbreakable submission hold. In a way, his surreal career with the WWE is a perfect metaphor for the last chapter of America: in the battle of the billionaires, the fight is rigged -- and the billionaire is the only one who really wins.

To quote a passage from the recipe book of what the Rock was once cooking, "it doesn't matter what you think." Except the Rock was a good guy. Trump is a heel, but he's a side distraction knocking out the referee so that the real enemy tag team of Koch and Mercer can lie, cheat, and steal their way to a title belt at the Money in the Bank match. That's all the time we have for Wrestlemania Americana... The Undertaker says, rest in pieces...

Who really knows what Trump will do. We saw his "performance" with the Navaho Veterans. Where it came from is beyond me. He may not be demented, but he may simply not care what he says and when he says it. He has never been called out in his previous career, so why not continue with what he wants to say. He was shipped to a military school by his parents because he was so disruptive to family life. This may be a live long habit.

What I do expect from him is nothing. He won't help his friends or family because they are of no political value to him. He pardoned the idiot/racist sheriff because that scored him political points with his base. His son and son in law, he doesn't care so much about. Now of course it may be in the end, his daughter will be the one with the long knife. Kushner is her husband and the father of her children.

hi lagatta...a squash pizza? Hmmm...I've never tried that, but I do love squash so maybe I'll try it some day. As long as I can add a little (Italian) sausage and lots of cheese to spice it up a bit... ;)

hi anon 5:56...I think you're right to be nervous about what Trump might do next, because there is no doubt that he has never been as dangerous as he is now. When the Republicans threatened to abandon him after the Access Hollywood scandal, he told them if they did he would take down the GOP. If he feels he's about to be humiliated by Mueller he could take down the whole country....

hi JD...Well I would certainly watch that movie. It would be like the Addams Family Xmas just better. And when the Orange Santa comes down the chimney into a roaring fire, that would be even funnier, and even better than the Grinch... ;)

hi anon 10:45pm...I too have been shocked at the shameless greed of the Republicans, cutting taxes for the rich and saddling their country with a crippling deficit, which will end up hurting the poorest and the most vulnerable. But there is one good thing. The Republicans don't really need him anymore now that they've pleasured their big donors. So if he acts like a monkey again, the chances that he could be impeached will increase exponentially. And the chances the Democrats could seize control of Congress will also increase. I know it's not much consolation for our good neighbours who are living the nightmare, but that little pin prick of light on the horizon is the first sign of a new day dawning....

Hi e.a.f...nobody can predict what Trump will do, but that's what makes him so dangerous. When the Republicans threatened to abandon him after the Access Hollywood scandal, he threatened to take down his own party. If he thinks Mueller is going to humiliate him he is in my opinion capable of taking us all down with him....