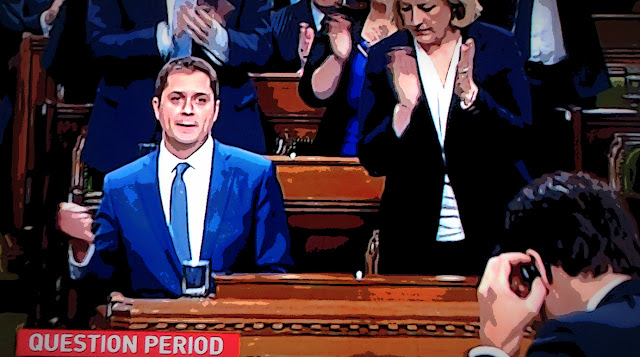 There is something very disturbing about this picture of Andrew Scheer, taken on the last day before Parliament adjourned for the holidays.

As he stares at Justin Trudeau with his creepy smile missing, and a strange almost crazed look in his eyes.

He attacked Trudeau like a rabid beast for months. He blew hot air out of every orifice until they were all glowing red.

Only to get absolutely nowhere. 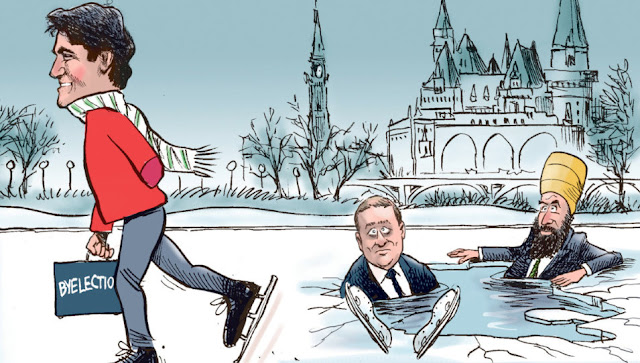 And I mean nowhere.

When the fall sitting of parliament began in September, Justin Trudeau's Liberals enjoyed a comfortable lead in the polls and were on track for a re-elected majority government in 2019. Three months later, as parliament adjourns for the holidays, the Liberals find themselves back in the same position.

With 39.6 per cent in the CBC Poll Tracker, the Liberals are down a little less than two points from where they stood when Parliament returned from the summer break on Sept. 18. The Conservatives follow with 32 per cent, up one point from the beginning of the sitting. Both of these scores are within a tenth of a percentage point of where the two parties stood on election night in 2015.

With the Cons and the NDP both stuck in neutral, and the Liberals heading for another thunderous majority.

Which no doubt must have Andrew Scheer asking himself the same old questions: 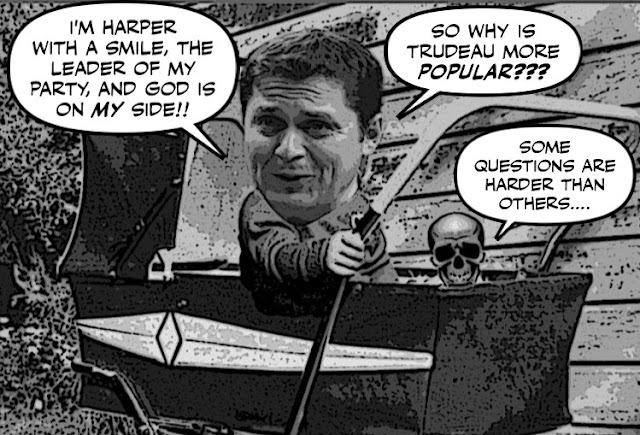 Or screaming the same question Susan Delacourt does:

Conservatives are killing it in QP, does anybody care?

And the answer as provided by that other old windbag Chantal Hébert is no, no they don't.

Throughout the fall — Trudeau’s most difficult political season to date — the New Democrats and the Conservatives have been telling themselves that buyer’s remorse was about to catch up to the Liberals.

It seems both opposition parties had been inhaling their own question period fumes.

In the end the only seeds of buyer’s remorse that may have been planted in the mid-mandate byelections would pertain to the opposition’s leadership choices.

Only the Con media that lives in the tiny Ottawa bubble cares about Question Period.

And you know what I think about them... 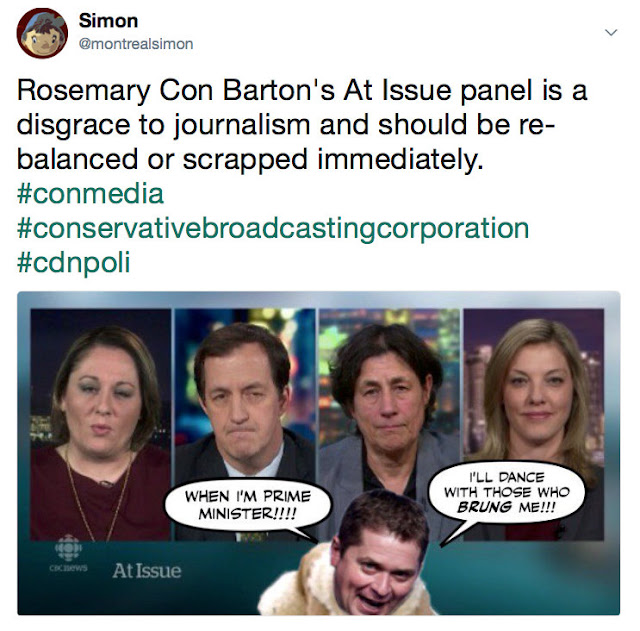 While most Canadians find Question Period too Con and too negative.

Which just happens to be the same reason most Canadians are turned off by Andrew Scheer.

And since Jagmeet Singh is not the face of the NDP,  Guy Caron is... 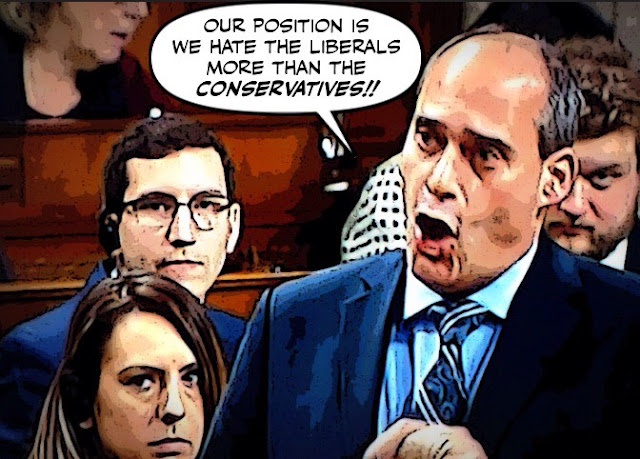 And he sounds like a Con just louder, the NDP isn't going anywhere either.

While the man they hate soars over their heads... 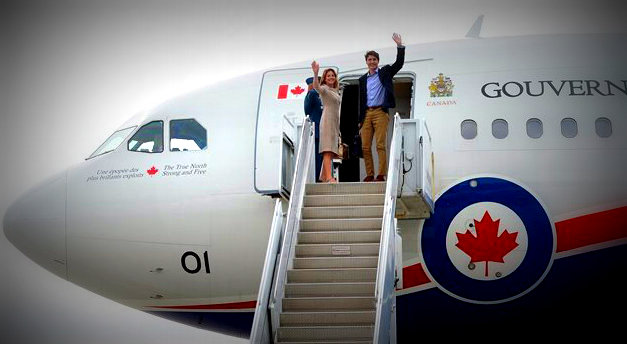 And I take another look at Andrew Scheer in the House of Commons...

Realize what I'm looking at is sheer or scheer desperation... 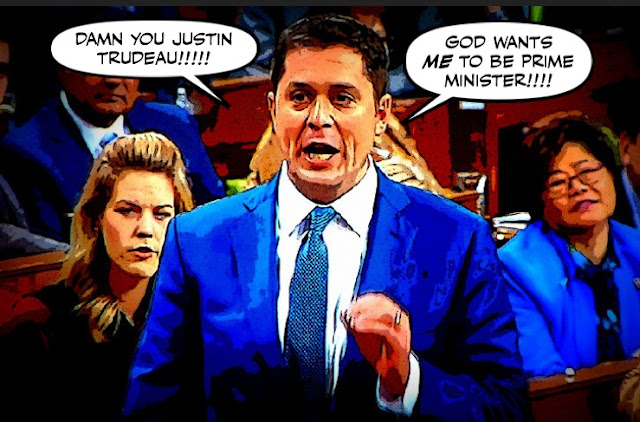 I mean look at that face now that creepy smile has fallen off.

The Cons have never looked worse.

Good. Connies need to be kept out of power until they are no longer fascists.

One of the top stories here yesterday on CTV.

"However the jury did not hear declarations from Djermane's family that the young woman said she did not mind doing time in prison and would be willing to join the jihad even if it meant spending 15 years behind bars.

The woman also told her family that if she could not leave Canada, then she would attack places in this country. She also allegedly told another relative it was okay to kill in order to save Muslims."

I'd like to hear our local Freud psycho analyze this one. I didn't read anything concerning their mental health. Pretty sure they weren't regular viewers of The Rebel either.

The more the cons approach singularity with the party of petulant pachyderms to the south, the worse off they're going to be. The Dippers will get dragged along with them by consequence of their own making. Although I hesitate to say it's anything resembling a Vulcan mind meld, because the Vulcans were known for their reliance on logical thinking, while the GOP, the Crappers, and the Dippers don't really have any minds to meld. That cartoon with Justin skating merrily away celebrating the by-election victory by his Tru Grits, while the clueless Scheer and Singh have fallen through thin ice, needs a "question period" (or a question mark) in a hazy thought balloon above their rattled heads. They're Just Not Ready™ for pee wee hockey! (Neither is Pee Wee Poilivere.) Nice own goal, though.

Justin (and Sacha!) are going to have a very happy birthday this year, and Canada's going to have another happy holiday season. The one for the U.S. will be bittersweet (especially with our cons about to take a bigly yuge, elephantine dump in everyone's stocking with that Malthusian social-engineering program disguised as a tax bill, and the greedy, ISP-bought FCC about to engage in "cord-cutting" of their own by pulling net neutrality off life support). But at least there's a very tiny glimmer of sunny ways breaking through the dawn's early light in Virginia, New Jersey and now even Alabama. The midterms are right around the corner and the backlash is in full swing.

Another year over and a new one's begun. Hopefully 2018 delivers something much brighter for all. Canadians are going to be able to kiss under the, uh... "mistletoe," blaze up the "yule log," and share some gingerbread "brownies" by this time next year, and they will have Trudeau to thank for that. Americans won't (unless they go on vacation up north), but with any luck, Santa Mueller will come along and send some nice little Treason's Greetings cards to the Rat King and his minions at the Kremlin outpost on Pennsylvania Avenue, with glitter-and-gold arrest warrants tucked neatly inside. Then Justin and all the other leaders and people in the world can finally dream of sugarplums, instead of having nightmares about nuclear winter.

Simon you are so funny, the Trudeau haters must hate you so much. But we love you, Merry Christmas and a Happy New Year!

Scheer certainly does look different without that creepy smile. You can see how much he hates Trudeau in that first photo, and he looks like he's going to cry in the second. You were the first to say that he could be worse than Harper, and I think Scheer has proved you right. Merry Christmas and a happy new year!!

People want to kill and actually kill for many reasons. We had a local incident a few years ago where two boys bludgeoned a classmate to death. No reason given but her complexion was a little darker than theirs... no one tried to build a generalized theory on that incident but guess Muslims are different. Whats you theories on the Millards, Bissonettes, Lepines and Wertlaufers of this world? Do they belong to a dangerous class of people can we isolate all of them and lock em up beforehand?
RT

MAGA my ass got arrested

hi anon...do you have any idea or formula for how long the Cons must be kept out of power before we can be sure they are no longer fascists? I'd say about two hundred years, but that may not be enough... ;)

hi anon 12:43...Whatever your diagnosis, Dr Freud or Dr Fraud, that poor woman clearly has some serious mental issues, and her condition says nothing about her religion. However I am quite concerned about those two white Christians who killed a man and a woman and disposed of their bodies in an animal cremation device. Should they be declared terrorists too? Please advise...

hi RT...now don't go ruining Dr Fraud's day by introducing complexity. Cons prefer to see the world in black and white, and anything more complicated scares them. Crime is of course as complex as humans, and has in 90% of the cases nothing to do with a person's religion. Of course there are some who argue that all religion is madness, but that's another question...

hi Jackie...Im very disappointed with the current state of the NDP. I believe in unifying progressives of all stripes, or forming a great progressive coalition. And I am not happy to see the Dippers, who I voted for in the last election, siding with the Cons all the time, and acting like their useful idiots.
And yes, 2017 in the U.S. was certainly a year to remember, and one most decent Americans probably want to forget as soon as possible. But the good news is that barring a war, the light is slowly coming back. Mueller is closer to taking down the Trump mob than ever. And I'm confident that at this time next year, we will have a lot to celebrate on both sides of the border...

hi anon...thanks for your kind words, the Trudeau haters do hate me so much, but then the feeling is mutual. I actually have a life, and sadly most of them don't. It must be awful to go through life all twisted up with hate, instead of laughing a lot and trying to be a good person like I do. And a very Merry Christmas and a Happy New Year to you too!!!!

hi anon...good one. I guess the meaning of MAGA will soon depend on whether Trump is still at large or safely behind bars. MAGA!!! MAGA!!! MAGAARGH!!!

hi anon...I have by now collected a good many mugshots of Andrew Scheer aka Schmear or Schmeagol. And there are only a few where he isn't smiling like some creepy serial killer, or the Son of Sam. I think he dies behind it, and let nobody be fooled. He could definitely be more dangerous than even Stephen Harper. Thank you for your warm wishes, and Merry Christmas and a Happy New Year to you too !!!