When the Porky Pervert Roy Moore Went After Jimmy Kimmel 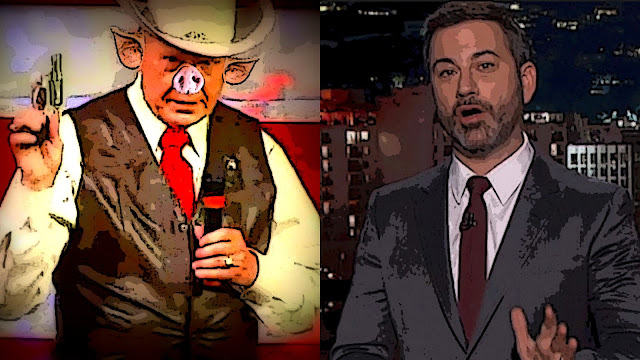 In the age of Trump, in the darkness of November, it turned out to be an epic confrontation.

Roy Diddler Moore, the religious fanatic and anti-gay maniac, taking on Jimmy Kimmel in a showdown at the Twitter Corral.

It all began when a comedian who works on the Himmel show disrupted one of Moore's speeches, hilariously.

By posing as one of Moore's supporters.

And pretending to defend him from a heckler.

It was an only in Trump's America moment, and thank goodness, or praise Jesus,
O'l Roy didn't pull out his pistol and start blazing away.

Instead when Moore found out that Tony Barbieri works on the Kimmel show.

He reached for his phone and sent Jimmy a somewhat threatening invitation. 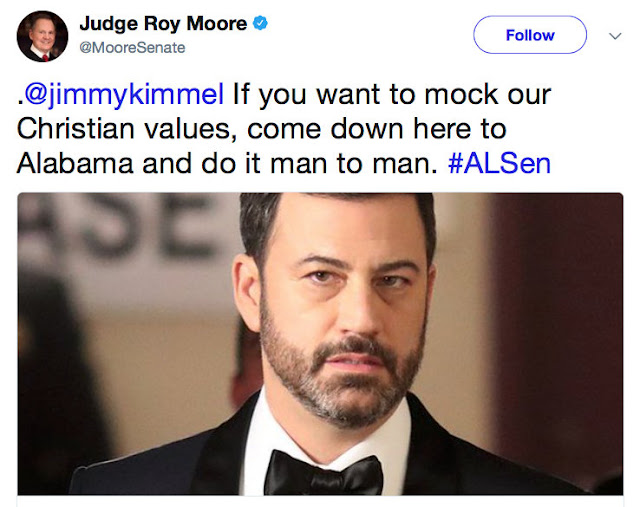 But Kimmel wasn't phased or intimidated, and fired right back.

Then it got even better.

And when Jimmy told his viewers what had happened, he was even more scathing.

The bottom line is this: I accept the invitation. I will come down there. What I’m going to do is — I think you’re actually going to like this, Roy. I’m going to come to Gadsden, Ala., with a team of high school cheerleaders, okay? We’ll meet you at the mall. Don’t worry, I can get you in.

And then when the girls and I show up, if you can control yourself and behave, if you can somehow manage to keep little Roy in your little cowboy pants when those nubile cheerleaders come bounding in, you and I, we’ll sit down at the food court, we’ll have a little Panda Express and we’ll talk about Christian values.

But then Moore deserves it. For anyone who blames his predatory sexual behaviour on liberal America. 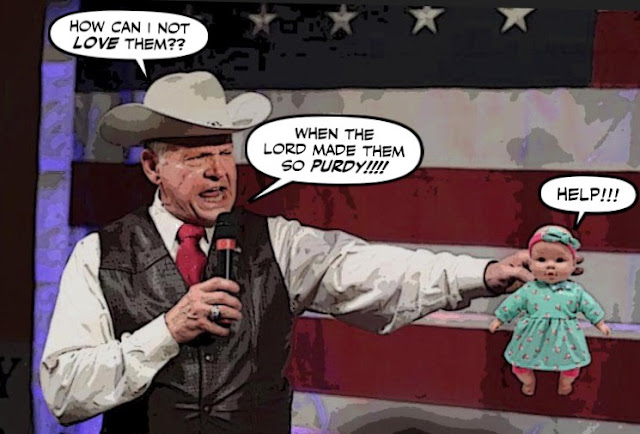 Is a pervert, a religious fanatic, and a maniac, and deserves what's coming to him.

Which will be painful.

For whether he wins or loses that Senate seat, Moore's fate is to help decent Americans destroy the Republican Party.

And for that we are grateful...

Alabama voters are so deluded, that Flynn's guilty plea may help Moore in a backlash hysteria.

At least Alabama voters have a culture. We're just post national. There is no mainstream in Canada. A hotel for the rest of the world. A Tower of Babel.

Alabama is the asshole of America, and deserves to be boycotted by most Americans. They should treat that backward state like Jimmy Kimmel treated that dirty diddler.

Alabama has a chance to redeem itself in the eyes of America and the world by soundly rejecting the old pervert.
If they choose a child molester over a Democrat because God forbid they could never vote Democrat then I say don't vote, stay home. Otherwise, as anon 6:45 states, they will indeed be viewed by most as the asshole of America.
JD

Canada's culture is the Federation of Planets, not Tower of Babel. Be glad you have an intelligent and compassionate Trekkie in charge instead of an illiterate pro-wrestling buffoon with ties to the Russian mob and Eastern European sex traffickers, or a theocratic pedophile who got banned from a mall for creeping all over teenage girls.