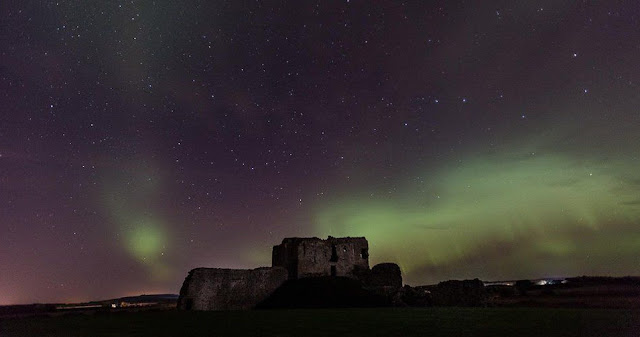 Whenever I'm in Scotland, I like to ride out to this ruined castle near my family home, lie on its grassy slopes in the dark highland night, stare up at all those stars in the sky.

And wonder on occasion whether there are aliens out there zipping around in their UFOs. And if so could they please come quickly and save us from ourselves?

So I'm glad to see that I'm not alone, or going crazy.

And that the Pentagon has finally admitted that they had, and may still have, a top-secret UFO program.

Which has recently released some videos like this one.

Or the even better one at the beginning of this story.

In the $600 billion annual Defense Department budgets, the $22 million spent on the Advanced Aerospace Threat Identification Program was almost impossible to find. Which was how the Pentagon wanted it.

But although those new videos are intriguing, the UFO question and the search for extraterrestrial intelligence (SETI) has been around for a while.

U.F.O.s have been repeatedly investigated over the decades in the United States, including by the American military. In 1947, the Air Force began a series of studies that investigated more than 12,000 claimed U.F.O. sightings before it was officially ended in 1969. The project, which included a study code-named Project Blue Book, started in 1952, concluded that most sightings involved stars, clouds, conventional aircraft or spy planes, although 701 remained unexplained.

I'm sure there's an earthly explanation for all of them. I wouldn't be surprised if some of those close encounters are brief glimpses of secret military toys made for the Pentagon itself.

And I still find it bizarre that while some people want us to protect ourselves from the threat of an alien invasion, others are preparing to beam messages at any new planets or stars we discover in the vastness of space.

Instead of just listening, we would transmit messages, targeting newly discovered planets orbiting distant stars. Through “active SETI,” we’d boldly announce our presence and try to get the conversation started.

Because like many others I don't think that's a good idea eh?

“ETI’s reaction to a message from Earth cannot presently be known,” states a petition signed by 28 scientists, researchers and thought leaders, among them SpaceX founder Elon Musk. “We know nothing of ETI’s intentions and capabilities, and it is impossible to predict whether ETI will be benign or hostile.”

We don't want to attract even more dangerous alien invaders... 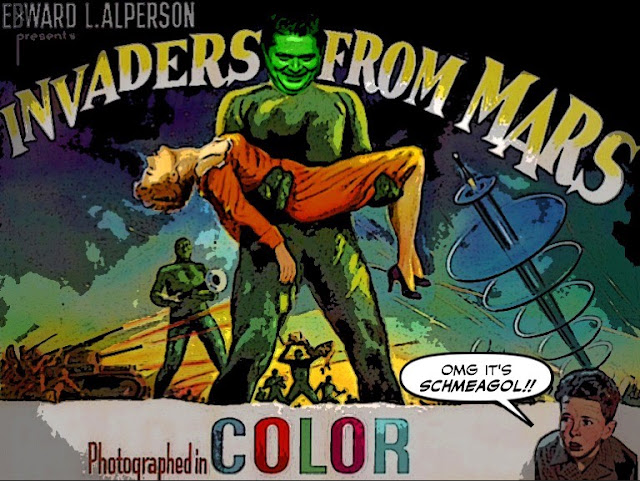 But if there really are alien invaders, and if they are friendly, and unlike the Cons don't want to eat us and destroy our country.

I would ask them a favour.

Please save us from this maniac before he kills us all... 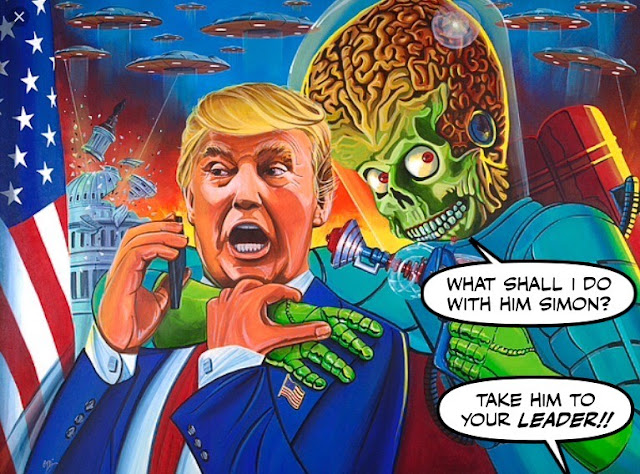 And since Trump by now must have alarmed the whole universe.

Who is to say they won't listen?

And that they are not already here...


Earthlings unite to defeat the alien Cons and Trumpkins.

Only we can save our country.

Only we can save our planet...

IIRC, in the novel Contact by Carl Sagan (and the subsequent movie adaptation with Jodie Foster and Matthew McConaughey), the central character (Foster in the film) is an astrophysicist who learns from NASA that the first-ever transmission sent out in the search for intelligent life elsewhere in the universe was actually Hitler's victory speech, but the U.S. government didn't want to admit that the Germans beat us to the punch. Not that America was any less racist in the 1930s, just that they had different tactics of taking out those values on their own oppressed people. Although, Hitler himself did crib notes and even get help from American industrialists and investors like Henry Ford and Prescott Bush, and racist theorists and eugenicists who were respected professionals in academia, science and medicine. We in turn brought over Nazi scientists during "Operation Paperclip" to work on, among other projects, the nuclear bomb. So there is some validity to at least the prospect that America and Germany collaborated on some nasty things together and that the government isn't exactly enthusiastic about owning up to it.

Which means, if there is any intelligent life out there (there certainly seems to be a dwindling amount here on Earth), what we're showing them as the face of our species and how we interact even with each other, let alone "foreigners," matters a whole lot if they were ever to try and get in touch with us. If they think we're jerks, that's not going to bode well. That's why I think the next "golden record" we send out (golden iPod? Not golden shower, that's for sure) should be from Canada. YouTube has a very charming channel called "Here's My Canada," which was sponsored by Canada's government to celebrate the 150th anniversary of their establishment as a nation this year. Business leaders, schoolchildren, teachers and professors, other everyday citizens, MPs, and of course PM Trudeau himself all recorded video clips about 2-5 minutes in length talking about what Canada means to them: everything from hockey to poutine to Tim Horton's to a plethora of videos celebrating multiculturalism and the welcoming in of people from around the world. In theory, this could be extended to people from out of this world.

I wouldn't send the aliens anything featuring Andrew Scheer or Stephen Harper, or DVDs of The Apprentice, except maybe as an example of how feral wildlife behaves and which is to be avoided and quarantined for the visitors' own safety. Send them a copy of the "Here's My Canada" channel, Justin Trudeau's own YouTube feed (but not the comments -- yikes!), and the 60 Minutes interview where he emphasizes the importance of taking in refugees and diversity being a strength. The Force is strong with the young Jedi, or junior Trekkie who clearly wants to lay the groundwork for the Federation of Planets to set up shop in Ottawa. Leave a note with a disclaimer that Rebel Media, Fox News, and Donald Trump (etc.) aren't the intelligent (or compassionate) life forms they're looking for. Then send Chris Hadfield along to deliver the message with a singing telegram about how friendly the Tru Canadians really are. Make it so.

Sure beats Trump looking directly at the solar eclipse, "alienating" Elon Musk from his joke of a White House business-advisory board (one that also included the wife of the WWE guy), and making Buzz Aldrin wish he'd never left the moon. (Let alone the fact that he was elected by a good chunk of people who don't even believe anyone actually went there at all.) One giant leap backwards for mankind.

hi Jackie...when I was a boy I dreamed of meeting up with noble aliens who would rescue me from grubby Planet Earth, where I obviously didn't belong. ;)
But I've since changed my mind. I think that if there were any noble aliens out there, and they got a message from our belligerent planet, they might interpret it as a threat. Although I have to admit that somewhat negative view of ETI was heavily influenced by the classic Twilight Zone episode "To Serve Man,"where a misplaced alien book turns out to be a cook book...