The Sheer Desperation of Andrew Scheer

Andrew Scheer isn't smiling as much as he used to these days, as he tries one thing after the other to make himself more popular.

But even with the help of his Mini-Me, Hamish Marshall from The Rebel, it's all going horribly wrong. 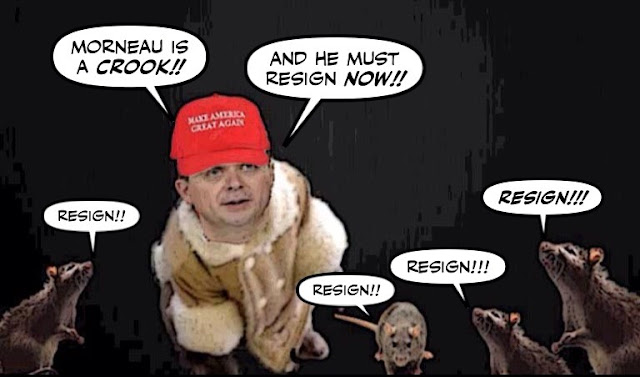 After months of attacking the decent Bill Morneau as only a religious fanatic could, and getting nowhere, he's now under attack himself.

With Chantale Hébert accusing him and his Cons of being bullies.

Over the nine weeks of the fall sitting of Parliament, the Conservative official Opposition has devoted no less than 15 questions daily to matters pertaining to Finance Minister Bill Morneau.

By last week — with Conservative Leader Andrew Scheer formally calling for the minister’s head — the opposition rhetoric had veered into character assassination territory. Morneau may be too politically clueless for the good of his government, but it is a leap too far to imply — as the official Opposition has taken to doing — that he is dishonest.

And with even the uber right-wing Terence Corcoran accusing him and his party of being unethical.

If Morneau is still finance minister a year from now and the allegations of conflict of interest and insider trading prove to be the legally and politically bogus allegations that they seem to be right now, Scheer will have been reduced to looking like an ineffectual spreader of political dirt rather than an upstanding leader with high ideals and a clear plan for the country.

So now Schmeagol has gone back to the politics of fear... 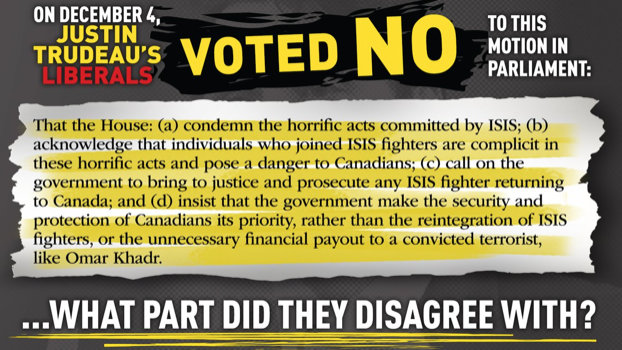 Even though it's only been a few days since he was run over by a giant baloney meter. 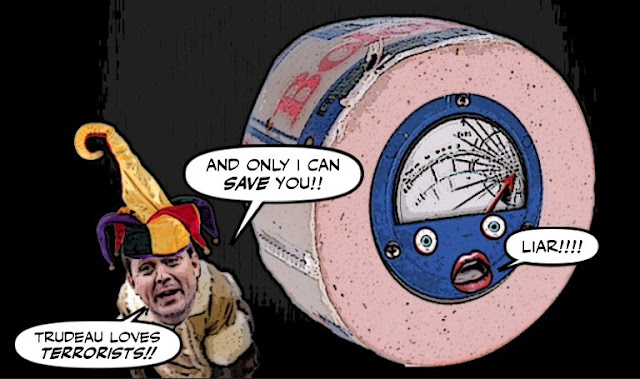 While his Cons try to play the same dirty game in this riding in Toronto.

For which they should be arrested.

And as if that wasn't bad enough, Lisa Raitt finally had something to say about that smear website she asked her Twitter followers to visit.

Only to have have it disappear without a trace a few hours later.


Lots of traffic on this RT below. Site is now down - and as I confirmed to a reporter who asked me - I don’t know who was behind it. Any RT’s are NOT endorsements unless specifically indicated. https://t.co/tZfJcKjZNO
— Lisa Raitt (@lraitt) December 7, 2017

Because that first tweet was NOT a retweet, it was an original tweet. So she must have created it herself, and must know who was behind it.

But then that's Raitt... 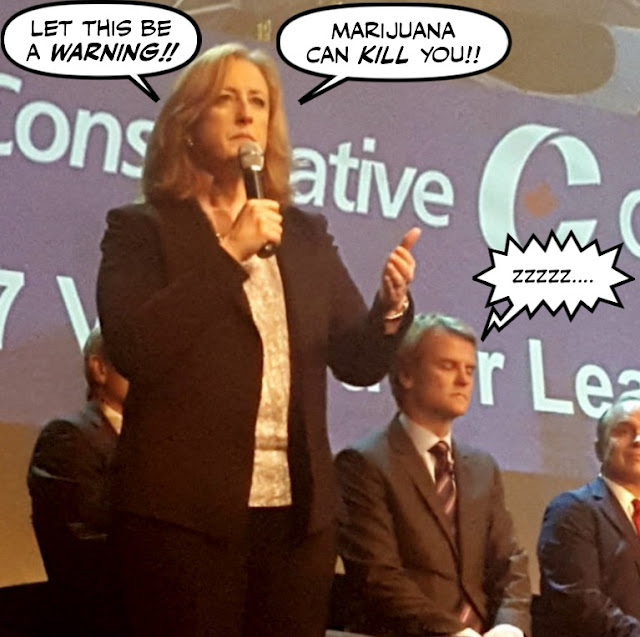 And I wouldn't be surprised if the next thing she'll be saying is that cancer is "sexy."

And that it's caused by Liberals.

When in fact the Cons are killing themselves. 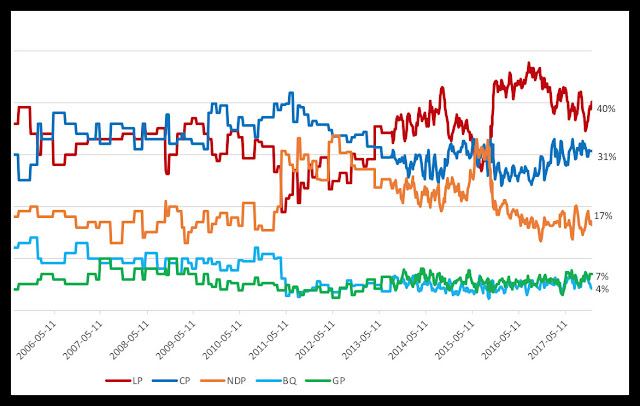 While the Cons are stuck in neutral, and the NDP are going nowhere.

And if you look at young voters the results couldn't be clearer:

They don't like the Cons with their religious fanatics and bigots, they're voting with their feet.

And they are the ones who will decide the next election.

Except no wonder the Cons had a blue Santa at their Christmas party to match their mood... 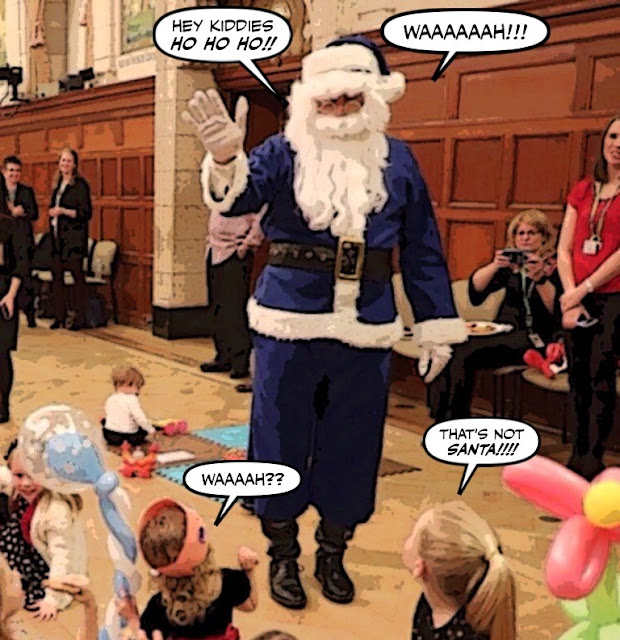 After all that Schmearing or Schmeagolling turned out to be for NOTHING.

What a Prime Minister.... 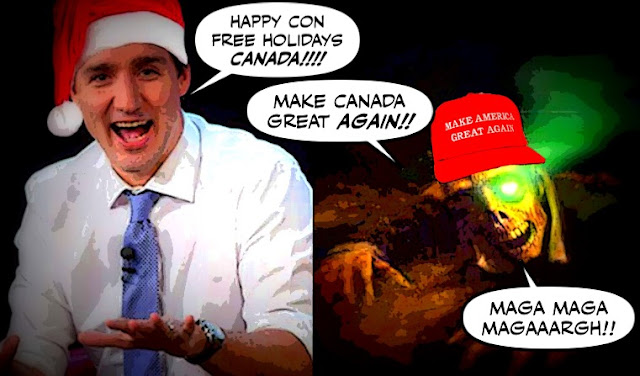 If we support the CIA we must be on a wind that the Sheerforce
can be measured. I mean how much cash.

Is that Andy Claus going so far as to inject partisan symbolism into the holidays by wearing a blue Santa suit instead of (gasp) Liberal Red? Oh, give me a break. He should be dressed as Scrooge, the Grinch, or the Krampus Beast. But what I really want to know is, why isn't Nate the Great there dressed as his bald henchman, Dipper the Elf?

JT's actual birthday is December 25, and he demonstrates the Tru' meaning of all the festivals of lights and glad tidings -- from Diwali, to Chanukah, to St. Lucia Day, to Christmas, to the pagan observances of the harvest season and the solstice -- that Canada's many vibrant cultures and traditions have to offer. Including the unofficial commemoration of Newtonmas, which celebrates the contributions of the famed English mathematician (also born on December 25), and holds out for a day when reason and humanism triumphs over tribalism and suspicious superstition. The "candle in the dark" that Carl Sagan wrote about: intellectual inquiry into the brilliance and natural connectedness of (as Douglas Adams said) life, the universe and everything. The original Internet of Things surrounding us all.

The invasive alien species of cons, meanwhile, shows no signs of intelligent life anywhere in its ranks, nor respect for the natural world or its inhabitants, whether human or otherwise. Scheer would rather cultivate hatred and the dark side, and lash out at scientists like Julie Payette. If there was a holiday for the village idiot, he should be the poster child for it.

A blue Santa?!
What a desecration it is to dear old Santa Claus as we've always known him.
Let me guess, was he handing out little "Jihadi Justin" dolls to further brainwash the kids?
The Cons really blue it this time Simon.
JD

omg that was funny, the question, that is, like what the Liberals disagreed with. some one must be desperate. looks like some one hired some one from Bannon's office..........

I really don't care what the Cons have to say about the finance minister. He seems to be doing just fine running the country's finances. Its not like he was a Mulroney type or a Cons from those days and we all know how they played.

Perhaps Scheer will go visit Santa Claus and ask him for the Prime Ministership..........well he can hope but its doubtful......

hi Jackie Blue...it may appear to be a small thing, but going for a blue Santa is in my opinion the hallmark of fanatics. The Harper Cons tried some of that nonsense, by among other things, painting the Canada Day celebrations in Ottawa blue. And then there was the Prime Minister's plane that was dressed up in the American colours, instead of the red and white of Canada. But what I also see is that the Cons are desperate, and it explains everything they do. They are desperate to boost their poll numbers, but nothing they do is working. And they're running out of time. In a few days Parliament will recess for the holidays, and Scheer and his gang will practically disappear for about two months. And what a blessed relief that will be...

hi JD...yes, a blue Santa can you believe it? And can you believe the small minds who thought that one up. If they think a Blue Santa can help them become more popular they are in worst shape than even I had hoped for. Their branding effort was a complete flop, and I'm just surprised the kids didn't run for their lives... :)