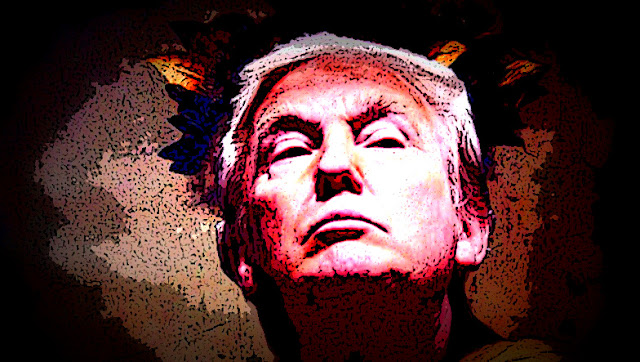 I always knew that a close look at Donald Trump's White House, and the court of the Orange Emperor, would be a deeply disturbing experience.

I just didn't know how bad or how crazy it could get.

But now a team of writers from the New York Times has done that, and it's a real horror show.

Even worse than I had imagined... 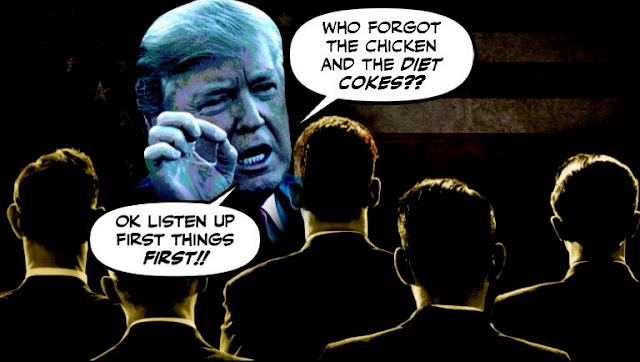 A journey into the banality of evil, or as the Times calls it, Inside Trump's Hour-by-Hour Battle for Self-Preservation.

For other presidents, every day is a test of how to lead a country, not just a faction, balancing competing interests. For Mr. Trump, every day is an hour-by-hour battle for self-preservation.

He still relitigates last year’s election, convinced that the investigation by Robert S. Mueller III, the special counsel, into Russia’s interference is a plot to delegitimize him.

Other aides bemoan his tenuous grasp of facts, jack-rabbit attention span and propensity for conspiracy theories.

He's paranoid, he can't tell the difference between bad information and the truth, his staff can't control him, not even his designated nanny, John Kelly... 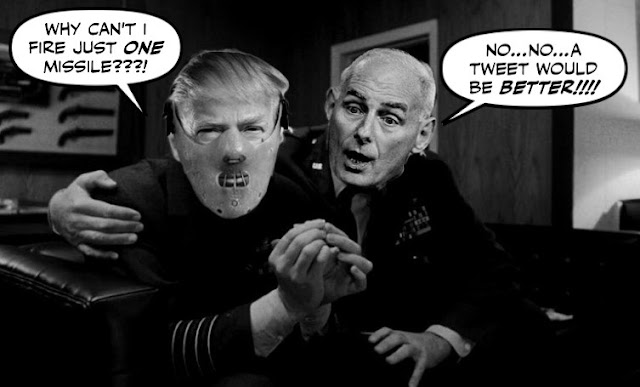 Mr. Kelly has told people he will try to control only what he can. As he has learned, there is much that he cannot.

His madness wears them down.

Mr. Trump’s insistence on defining his own reality — his repeated claims, for example, that he actually won the popular vote — is immutable and has had a “numbing effect” on people who work with him, said Tony Schwartz, his ghostwriter on “The Art of the Deal.”

“He wears you down,” Mr. Schwartz said.

He watches too much cable news... 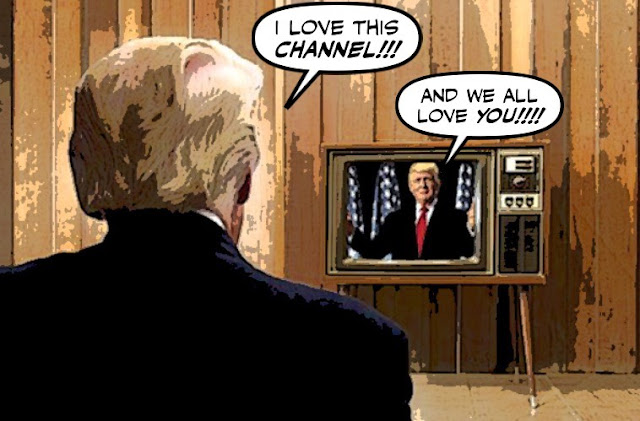 People close to him estimate that Mr. Trump spends at least four hours a day, and sometimes as much as twice that, in front of a television, sometimes with the volume muted, marinating in the no-holds-barred wars of cable news and eager to fire back.

Watching cable, he shares thoughts with anyone in the room, even the household staff he summons via a button for lunch or for one of the dozen Diet Cokes he consumes each day. 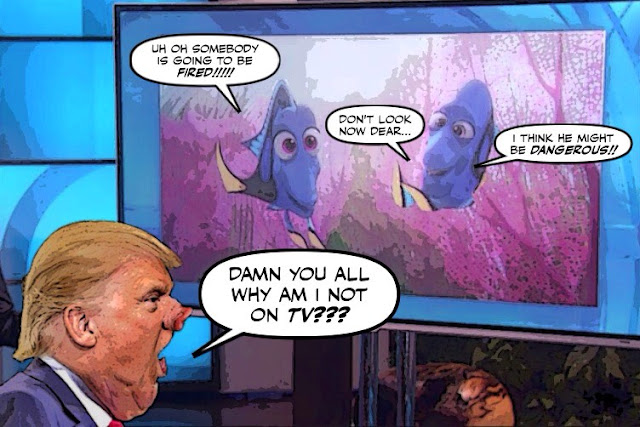 He wants his terrified staff to think that every day is a new episode in the reality TV show of his presidency. From I love Lucy, to I Love Donald, that's how far we've fallen.

If he keeps this lifestyle up, with all that stress, all those Diet Cokes, all that fried chicken... 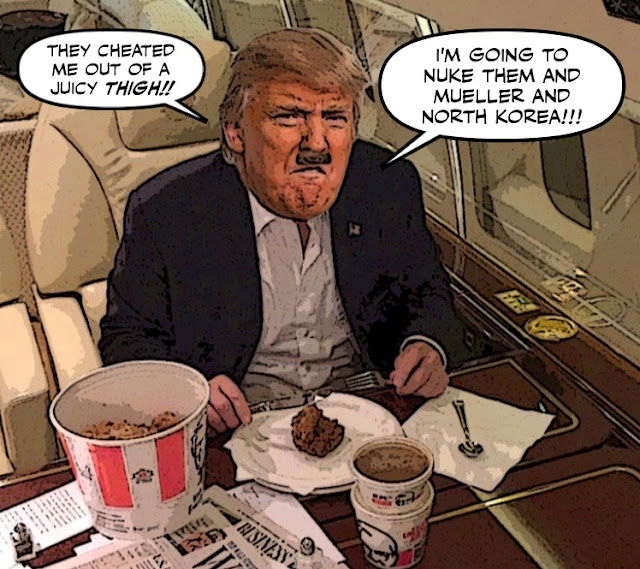 And all those tureens of gravy.

They'll probably be wheeling him out feet first and bottoms up long before the next American election... 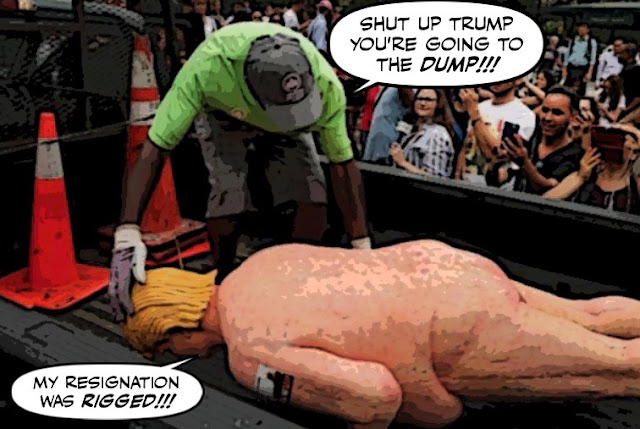 He never should have been president.

And neither was the world... 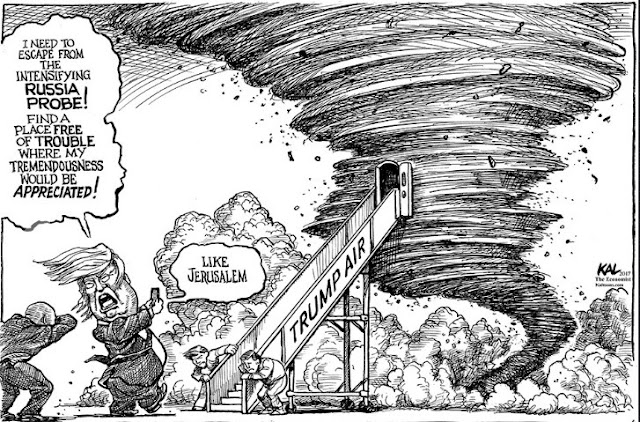 Labels: Donald Trump, The Madness of Trump, The Rise and Fall of the Orange Oaf, The Trump Junta

Diet Coke, my ass! The way that guy sniffs while he talks, it sounds more like he's into the "real thing."

Simon, when I saw this title, the first thing I thought of was American Idiot -- part two. In 2004, Green Day released their epic political rock-opera album about George W. Bush and what a lot of people thought was going to be the worst-ever destructive warmongering presidency. But now we've got American Maniac, the sequel -- and as atrocious as Shrub was, the Dotard is that much worse. If anything, he's not only exacerbating the effects of the calamities that Shrub and his daddy's men caused for the Middle East and the global economy, but accelerating the process of destroying not only his home country but the whole world. Even Shrub never intentionally picked a racist fight with Kanye West over the Internet, or called to have journalists and Saturday Night Live comedians "disappeared" for criticizing or making fun of him. He might have been dull-witted, but Orange McOrangeface is dangerously thin-skinned.

The Dotard is a "Basket Case," all right. A basket full of dookie, and a nimrod to boot. He's a loser and a user and a sexual abuser, and he's leading us all to a 21st century breakdown while his party tries to take us back to the 19th (or bomb the planet clear out of the time-space continuum). Welcome to paradise -- I wonder how much better his opponent Whatsername would have been...

If Americans had read the truth about Trump during the campaign he never would have been elected president. But the MSM preferred to tell us all about Hillary Clinton's e-mail non-scandal. And now they're stuck with a sexual predator who is threatening to destroy our planet by one way or the other.

Maniacal, narcissistic, demented, deluded, abusive.
President Trump, the walking fast food dumpster is certainly all of the above. While we light up our trees, he lights up the middle east. While we help our neighbours and friends, he helps a racist, homophobic pedophile. No moral compass, no conscience.
I hope Santa brings Donald Plump lots of cokes and buckets of chicken this year. If the cokes don't rot his guts out then perhaps we'll get lucky and he'll be treated to a great big juicy Kentucky Fried Cardiac Arrest.
JD

Might also having something to do with 25 or more years in public life allowing people to form strong and fixed opinions about her.

Also she and her minions did try and rig the race against Bernie Sanders as well.

Bernie is a sick old man who is under FBI investigation.

Hi anon...He was sniffing like a hog or a coke addict wasn't he? I keep thinking he'd never dare, or it would kill him. But it is his kind of drug...

hi Jackie...I love that song, and I believe I have a video somewhere of someone singing "I Don't Want to be a Canadian Idiot."
But yes, American Maniac is where we are now. I thought of using American Caesar, but I thought it was too fine for Trump. I don't know what kind of president Hillary Clinton might have been, but despite her flaws nobody will ever make me believe that she wouldn't have been better than the Orange Oaf...

hi anon 4:38 PM...yes, the coverage of Trump's rise to power was an absolute disaster. First networks like CNN covered all his rallies like some kind of reality TV show, and then when Trump got into trouble they tried to make it sound like Clinton was also in trouble just to create a false balance. And Trump got away with murder...

hi JD...yes, he is so many bad things, but somehow he is president. I don't think I'll ever quite believe it. But the good news is that his popularity keeps dropping, he is clearly under a lot of stress. And with his fried chicken, and his tureens of gravy, and the 12 Diet Cokes a day. I'm predicting that sometime next summer, on a very hot day in
Florida, he'll collapse on the sixth green at Mar-A-Lago. I want him to go happily, just as long as he goes... ;)