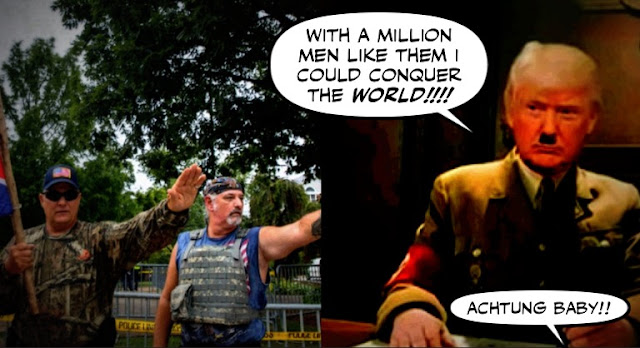 As I said in my last post, Donald Trump has finally been exposed for all to see as a Neo-Nazi supporter.

And he's still refusing to denounce this cowardly killer. 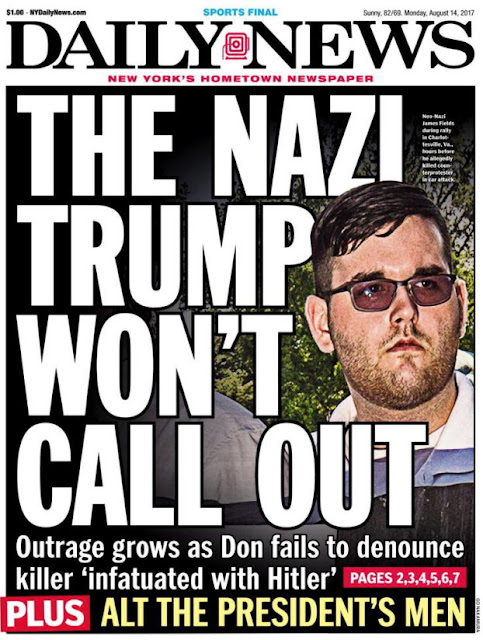 But then as I also pointed out bigotry runs in the family.

So the next time his citronella Nazis call us cucks.

Somebody should call them suckers.

For all the right reasons.

Don’t Be A Sucker was released in 1947 by the US war department. The 17-minute film depicts a man lamenting African Americans and “foreigners” taking jobs, before drawing parallels between such white nationalism and the rise of the Nazi party in Germany.

A clip was shared widely on Twitter and elsewhere on Sunday, as people drew parallels between the scene depicted in the film and the current climate in the US.

Golly. Imagine if daddy Trump had steered little Donald in the right direction... 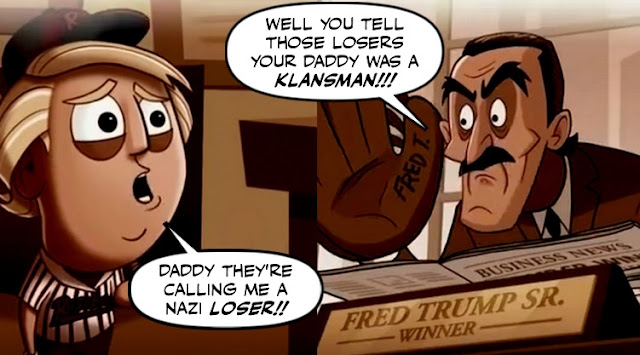 He might have made America great again, instead of trying to remake the Reich.

So you know where he's going... 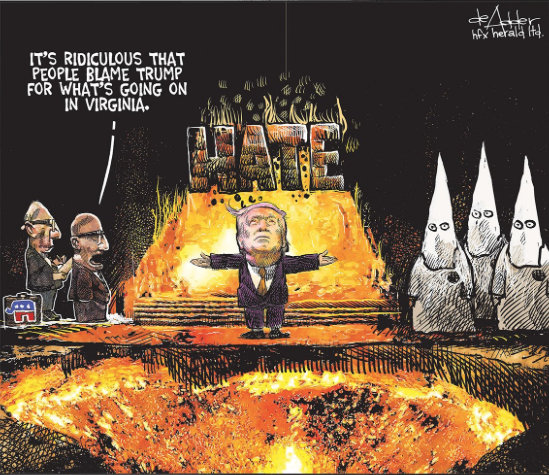 Been calling the alt-right the alt-reich forever, man

Vroom vroom. Out of the way progressives.

Can we call out Islamic Terrorists, can we call out black live white haters
and yes without doing that we should call out fascist Nazi without hesitation.

You're making light of violence against innocent people defending against the modern-day brownshirts? Simon, please ban this anon whoever he is. What happened to that poor girl is NOT funny and should NEVER be condoned. A person DIED. This isn't "for the lulz" or "dank memes" anymore. This is just SICK.

When haven't we called out Islamic terrorists as deranged murderers and extremists. It is just that we fail to identify an entire race or religion by easy labels. I fail to actually recall any violence leading to deaths by BLM organizers, although the media and police were quick to blame some officer shootings on the rhetoric of BLM regarding black shootings by police, they were just as quick to refute branding of black killings by whites as a symptom of hate speech by right wing politicians or alternative media hate sites.

Simon -- Deplorebel Media went to stir up merde in Charlottesville. Faith Goldy attended the Nazi rally and provoked counter-protesters, and Gavin McInnes just uploaded a video to their channel blaming "the left" for the violence as usual.

They need to be shut down now and all of them, especially Levant since he's the one who provides the platform, hauled before some sort of commission for aiding and abetting terrorism and hate speech. Every single person at that atrocious "channel" needs to be barred from ever having an Internet outlet again. They're now complicit in fomenting international unrest.

It very well could happen, too. Justin Trudeau sent out a tweet condemning "racist violence & hate" -- and subtly called out Deplorebel Media and their ideological cohorts without mentioning them by name:

"We know Canada isn't immune to racist violence & hate. We condemn it in all its forms & send support to the victims in #Charlottesville."

Take that, Deplorebel Media. Trudeau recognizes there are Nazis on the rise in friendly Canada. Joliet Justin hates Canadian Nazis. But Levant is like a Jewish version of Julius Streicher, the guy who in Nazi Germany published the incendiary tabloid "Der Stürmer" to rile up the "base" and attract attention to himself. Well, he finally got senpai to notice him -- and in the worst way possible.

CBC is also finally reporting on their ties to the Crappers, albeit right now only in the context of an Alberta politician who's on record as saying disgusted by their actions and rhetoric, and wants the party to cut ties with them:

...which, of course, they won't, no more than Trump severed ties with Bannon and Breitbart or Alex Jones and Infowars. The connection between the cons and the traitorous Deplorebel Media needs to really be mentioned more in the mainstream press, so that the GOP North can collapse beyond redemption just like we Americans hope our Trump Party eventually will too.

The circus has only been in town for a little over 200 days and is about to cancel its opening act. The Mooch was hired to bring in a more risque comedy act but the pilot failed to launch. For those that missed the Repugnants and the Mooch interlude don't be too disappointed as the replacement acts promise to be spell binding and distract a broader audience before the Trump oligarchy is finally in place or its Mueller Time. What will it be; Bannon Walks the Plank, the Jong Tower of Death, the Jong Magic act, the Iranian Horror story,Terror in the Streets,Name the Crisis(health,budgetary,civil,constitutional) ...the possibilities are endless but even Speilberg conceded he couldn't make this shit up.
RT

How long do you think your hero will last in jail? How long would you last in jail you coward, 15 minutes? You don't frighten anyone.

I've been using alt-scum but I may have to consider changing.

hi anon...good, because that's who they are. The idea of those Nazis flying under the radar is absurd, since anyone can smell them a mile away...

hi anonycon 4:44pm...you know, I've never considered right-wingers to be fully human, but you seem to be a cross between some sort of reptile and a wild hog. Have you no decency? The woman who was killed had more class in her little finger than you have in your whole body. And you and her Nazi killer deserve to share the same jail cell...

hi Steve...I have always called out terrorists and bigots bullies of any stripe or political persuasion, and I always will. But right now there is nothing worse roaming the streets of North America than those filthy Nazis and hoodless Klan clowns. As I said in my post, they defile the memory of our dead heroes, and cannot be tolerated by any decent person...

hi anon...yes thank you, I see our deplorables have been running rampant, and I just finished a blog post on that very subject.
It's bad enough seeing what is going on in the U.S., but that Rebel rabble should know that we're not about to let the same thing happen here...

hi RT...yes this has to be one of the worst political circuses of all time, and I suspect it is going to get the hook in record time. I'm personally hoping that the next act will be Bannon walks the plank, and forgets his safety net. But of course it could be nuclear war, so the sooner we can clear them all out the better and safer will be. And forget about Spielberg, even Kafka or Poe couldn't make that shit up...

hi Filcher...this moral equivalency is both absurd and disgusting. It's quite easy to see who are the victims and who are the oppressors. And anyone who can't must be either morally challenged, or totally blind....

"Can an Ethiopian change his skin or a leopard its spots? Neither can you do good who are accustomed to doing evil." (Jeremiah 13:23, NIV)

"A fortune made by a lying tongue is a fleeting vapor and a deadly snare." (Proverbs 21:6, NIV)

"A lying tongue hates those it hurts, and a flattering mouth works ruin." (Proverbs 26:28, NIV)

And many others were seriously hurt. Vroom vroom is about as vile as it comes.

Since, according to Trump, monuments are important and we learn history from them, I propose a monument outside the White House commemorating the British soldiers who burned the place down in 1814.