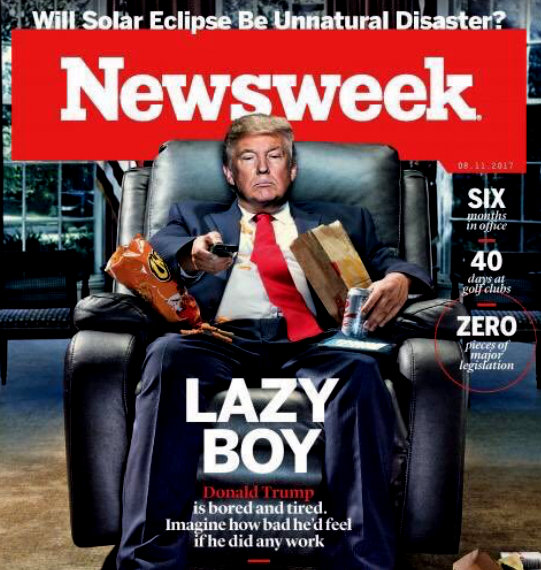 It's a brutal cover picture, and I'm sure Donald Trump must hate it. It's a narcissist's nightmare.

Trump must be screaming into every golden mirror in the White House, or rolling on the floor and biting the carpet in the Oval Office.

But is it fair?

I realize he's got almost nothing accomplished in the six months he's been in office, and that his White House is a mad house, and that he hates his new job.

But Lazy Boy does do more than just sit in chair and watch Fox News all day. 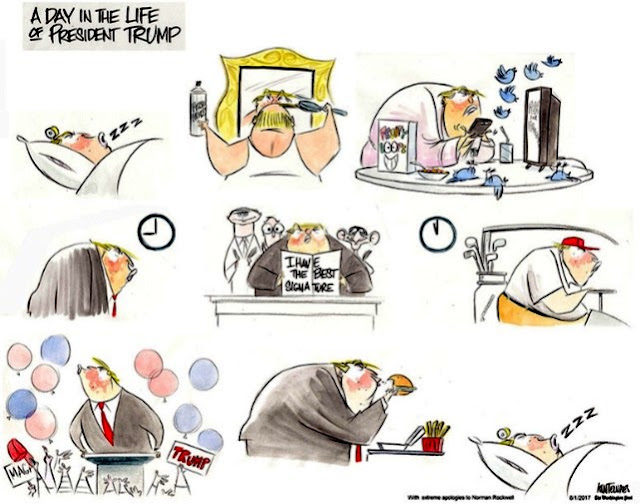 He has to glue his hair on, tweet to his 35.2 million followers, sign a lot of things he doesn't understand.

Which must be really stressful.

And he does play a lot of GOLF.

It’s hard to see how July could have gone much worse for President Trump.

It was revealed that, contrary to his repeated insistence, his son had been tipped off about Russian efforts to interfere with the 2016 election — and had embraced those efforts with open arms. Trump signed no new legislation, and saw his main policy focus, health care, collapse yet again on Capitol Hill.

He lost his press secretary after hiring a controversial new communications director, and then enjoyed the spectacle of that new hire giving a remarkably vulgar on-record interview to a reporter about his chief of staff, who resigned the next day.

But the month wasn’t a total wash! Trump managed to squeeze in at least eight rounds of golf over the course of July and, with the exception of one Saturday he was stuck flying back from Europe, hit up one of his personal businesses on every single weekend day. Silver linings to clouds, etc.

Even if as Andersen Cooper points out, all that golf and goofing off makes him look like a shameless hypocrite.

But then as Newsweek's Alexander Nazaryan points out, all that golf is just a symptom of a much larger problem.

In the uncertain autumn days following Trump’s victory, there was budding hope of a “pivot” from the bluster of his campaign to the pragmatism some claimed lay underneath the spray-tanned surface.

Instead, he is playing golf and tweeting anti-CNN wrestling memes. When the weekend concludes, Trump returns to the D.C. swamp with all the enthusiasm of an office lackey slouching toward his cubicle on Monday morning. Only six months in, he seems “a most unhappy warrior,” in the words of Trump biographer and CNN commentator Michael D’Antonio.

He hates his job. It's harder than he expected.

In late April, the president confessed that he was both overwhelmed and frustrated. “I loved my previous life,” he said. “I had so many things going. This is more work than in my previous life. I thought it would be easier.”

And of course now that the cops are after him and his mob, he probably hates it even more... 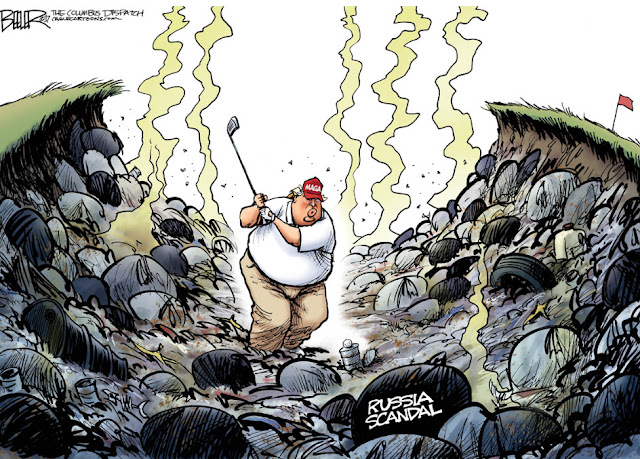 But then what do we expect from a man whose golf game tells us so much about HIM?

He breaks rules, exaggerates scores and ignores the game's decorum.

He drives his cart on greens and tee boxes. He talks through other players' shots. He "doesn't play a round of golf so much as narrate it, his commentary peppered with hyperbole."

He says he's attracted to the game by "walking down all those beautiful fairways," but he only rides in a cart.

And makes it only too clear why the monster of the greens is unfit to be president... 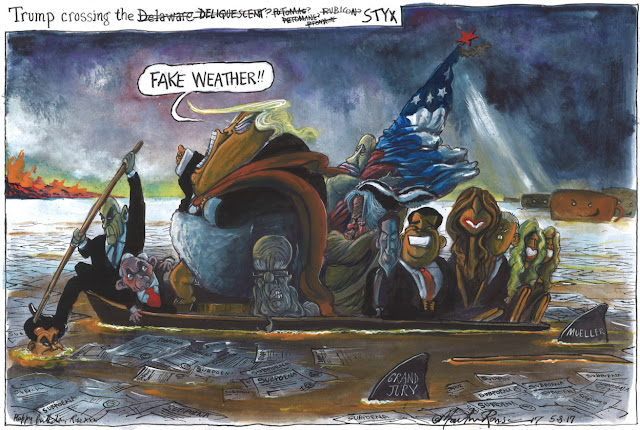 You know, if his boat won't sink, and Mueller and his Grand Jury can't get him before he kills us all.

And he won't drive his golf cart into a swamp.

Do you think we might push him off a cliff?

Have a great weekend everybody....
Posted by Simon at 8:25 AM

"late April, the president confessed that he was both overwhelmed and frustrated. “I loved my previous life,” he said. “I had so many things going. This is more work than in my previous life. I thought it would be easier.”

Howard Stern tried to tell Trump that, he's like why do you want to be President your life's perfect.

The obstruction case is ironclad, however Mueller wants to nail the GOP and the entire dump family. He will move on obstruction if one of the Generals signals that things are hairy.

And what does that have to do with Trump?

Truly amazing, markets at all time highs new jobs galore and he hasn't done anything yet ... no walls, health care, tax reform, infrastructure spending. Just wait until he tires of the foreplay and gets down to the business of screwing America in earnest. MAGA for ever!
RT

Its over for Trump, President Pence will usher in a Handmaidens eara of right wing fertility.

hi anon 9:05...as UU4077 and RT point out, if the U.S. economy is doing well you can thank Obama not Trump. And the fact that your monster is claiming credit shows he doesn't know what he's doing...

hi Gyor...I think a lot of people are failing to understand that Trump is a president like no other. He's so rich for him the White House really is a dump. Which is why I believe that he will end up walking away from the job...

hi anon 11:51 am...I don't know what exactly Mueller has on Trump. But he has assembled an impressive team, and I was Trump I'd be really worried...

his Steve... that's funny, but since the Trump White House does resemble a Game of Thrones episode, I wouldn't be surprised if heads start to roll...

Simon he has James Comey's memos, trump's tweets, trump's confessions to the Russians, the testimony of Comey, McCabe and other high ranking FBI officials for an obstruction case. Inside the realm of possibilities you have Comey wearing a wire or the possibility of his phone being mic'ed.

Trump doesn't have to glue his hair on.

hi David...apparently Bannon almost got the chop when Priebus was fired, but was persuaded that would make his Breitbart base too angry. And I agree with you Trump will have to choose between Bannon and his baby sitters and let's hope he makes the right choice...

Is he actually attacking a CAT? If we can get all the catladies - and catgentlemen - riled up, the @#$% is FINISHED!