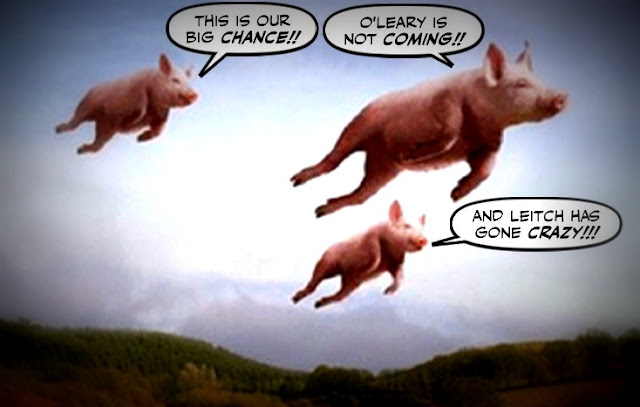 Tonight the Con leadership candidates, all fourteen of them, will converge on the Roger's Centre in Edmonton for the last debate of their long and dismal campaign.

In fact, to borrow a line from the Lion in Winter, if pigs could fly there would be pork in the trees.

Because for starters, Mr Marvellous won't be there. 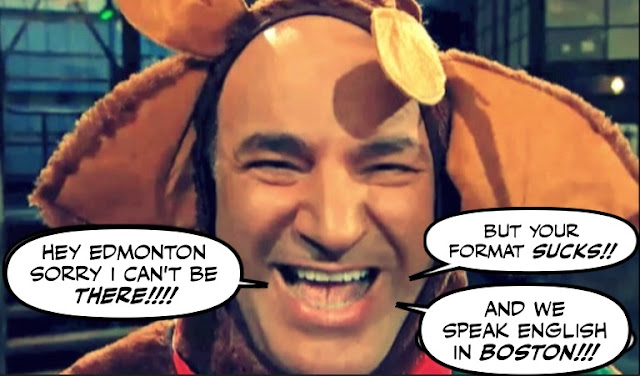 Yes, it's true. Kevin O'Leary will be boycotting the debate because he says he hates the format.

O’Leary, who has participated in several debates since officially joining the race in mid-January, announced his intention to pull out of Tuesday night’s event after his push to change the format fell on deaf ears.

Almost as much I'm sure, as he hates the fact that it's bilingual.

For he knows enough about TV to know what he might look like if he was asked something in French and couldn't even understand the question.

Even worse than he looked on Celebrity Jeopardy... 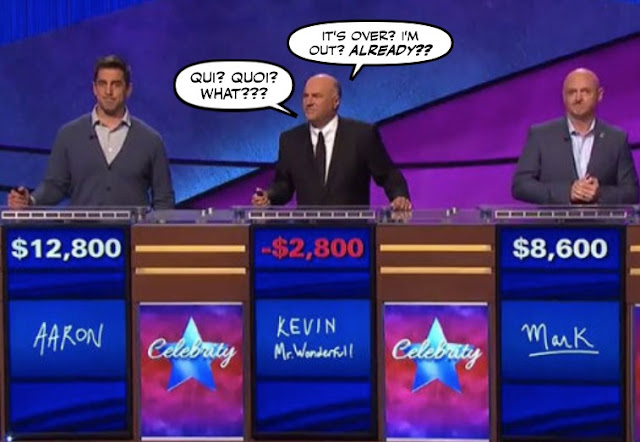 But strangely enough, O'Leary's decision to chicken out of the debate, wasn't the Con leadership disaster story of the day.

The story that really cast a pall over tonight's debate, was Kellie Leitch's bizarre video.

No, not the one from the last debate, where although she's always claiming she's against the "elites."

She couldn't stop bragging about her elitist qualifications...

No, what had many Canadians gagging and gasping yesterday was Leitch's new/nouveau video which believe it or not is even weirder !!!!

Working on my Kellie Leitch impression. It involves a lot of looking away with a goofy face pic.twitter.com/s2OgAIG7II
— Joel Hart (@turnipthebeets) February 28, 2017


So weird in fact it had me questioning her sanity, and had Twitter in an uproar.

For it really does make you wonder whether she is playing with a full deck... 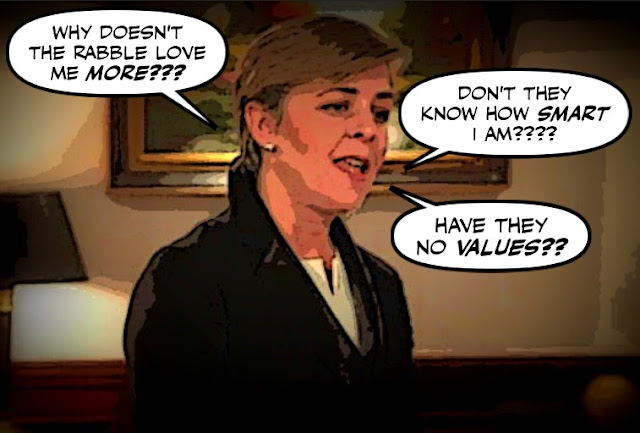 And one could almost feel sorry for her.

But then she's been looking for love and votes in all the wrong places.

She made her racist bed and now she must lie in it.

The Cons may never recover.

But O'Leary and Leitch are quite a team, and they do deserve each other.... 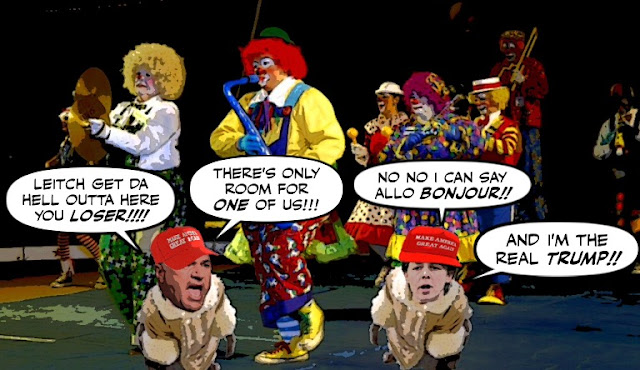 It's to bad Kevin O'chicken bowed out Simon and I don't think I'll be able to stomach his "fireside chat" or what I call flaming bullshit. Not after witnessing Kellie's surreal video. The camera going from side to side, up and down and zooming in and out reminded me of Nick Kouvalis driving down Younge street.
It's a political statement Kellie, not an episode of Undiscovered Vistas.
JD

She really seems be unhinged.

I obviously have not been keeping up. Is she doing guest appearances on The Rebel also?

I live in Ontario and our next Premier is Patrick Brown. The Liberals in this province have been totally incompetent and alledgelly corrupt beyond belief. Corruption is death for the left and life for the right.

This Con is feeling the Bern... The Bernier of course. But let Leitch push the party as far to the right as possible in the meantime.

The only problem is that the provincial Conservatives seem even crazier. It may even mean the NDP have a chance, unlikely though it seems.

And as a minor point it is hard to find a non-corrupt right wing party.

Painfully watched the Leitch video in its entirety. No discrimination there, wants to test all temporary and permanent immigrants for Canadian values by a face to face interview and some sort of sign off. Wonder what American and European applicants might have to say about that? No snobbery here!
We all know who the target audience is but legally she cannot single them out so it is everyone. This Con game is based on the average perception that the current Canadian Muslin population is 17% and going to increase to 27% by 2020 (IPSOS poll) whereas it is fairly stable at 3.2%. Just the type of leader the Cons need, a one trick wonder based on a false perception.
RT

Of clowns? The New York Clown was busy tonight and the Bostinian one set up across the street.

Fortunately for Kevin O'Leary - and Canada - when he becomes PM and the shit hits the fan we know that Trump, Putin and Kim will sit back, take a deep breath and modify their stance to one which Mr. Wonderful agrees... ain't life grand.

hi anon...yes it is pathetic isn't it? And Chong does seem a cut above the others. But of course that's what he doesn't stand a chance. If the Harper Party voted to support a carbon tax it would bring the roof down on their heads...

hi Kathleen...I'm afraid you are going to have to wait until the end o May for the convention. But I'm led to believe this is the last debate, so the next three months should be gloriously Con free...

hi anon 11:16...Can you imagine if O'Leary was prime Minister and Trump was still president? They would have to hold their meetings in a circus tent....

hi JD...well I have to admit, that I was disappointed that O'Leary ducked the debate. He's a REAL buffoon, and he makes the others look like the kind of clowns you can hire to entertain kiddy birthday parties. And as for the Leitch video...if Kouvalis shot it he must have fallen off the wagon again...

hi jrkrideau....she is indeed appearing on the Rebel, and with good reason. With all the ads she is running on Levant's racist rag, she must own a piece of it by now. All of which tells you how disgusting she is. For she claims she is not a racist, but when you go fishing in sewers like Breitbart and the Rebel, she will be judged by the company she keeps...

hi Steve...It's true that Patrick Brown's Cons are leading in the polls right now, and Wynne does need to go. But I've seen the Ontario Cons go crashing down before, and who can say it won't happen again?

hi MC...you know Bernier isn't a nasty guy like some of the others. He is after all from our province. ;) But sadly for you he is an extreme libertarian. And with all the things he would like to privatize, and the memory of the biker chick and the lost documents, he doesn't stand a chance...

hi RT.... It isn't just refugees and immigrants she wants to test for their Canadian values, she also has expanded her demands and now wants visitors tested as well. Can you imagine that? Attention tourists, before you collect your luggage, please proceed to the Canadian Values room...or ELSE. And yes, the Con game is to make it sound like we are are about to be swamped by Muslims, when as you point out they are just one of many minority groups in the Canadian mosaic. Their game is both false and entirely despicable, and it won't work in this country...

hi anon...well I hadn't thought of that terrifying possibility, and I wish you hadn't brought that up. ;) Trump, Putin, and Kim are bad enough, but add O'Leary to the mix and we wouldn't stand a chance...