How The Europeans Are Trolling Donald Trump 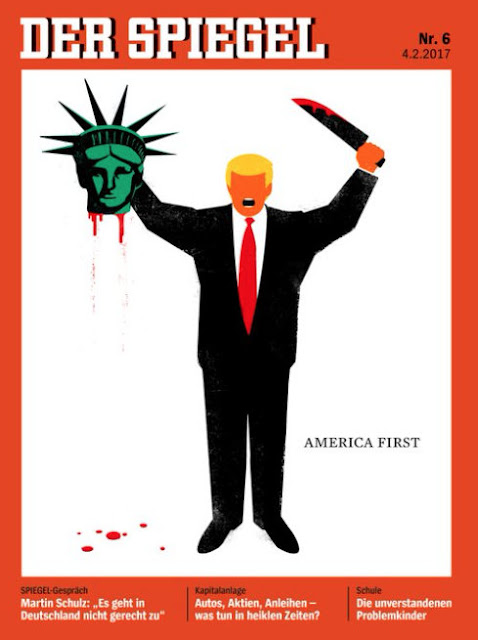 When you see the way some of Europe's most respectable magazines are portraying Donald Trump, you get a pretty good idea what many Europeans think of him.

For their covers couldn't be more brutal or more incendiary. 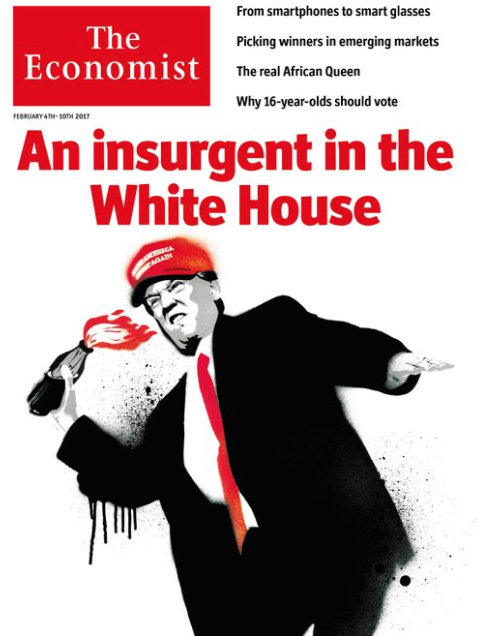 But that doesn't mean that the Europeans aren't also making fun of the fascist orange oaf.

So when Trump declared that from now on it would be AMERICA FIRST!!!

The Dutch rose to the challenge by asking if Herr Drumph would allow them to declare THE NETHERLANDS SECOND!!!

Which got the Danes going and demanding that it should be DENMARK SECOND!!!

And you can see some of the other entries here.

Meanwhile in the remote Scottish highlands, where my family and some of my oldest friends live, they are...er...still working on a similar video... 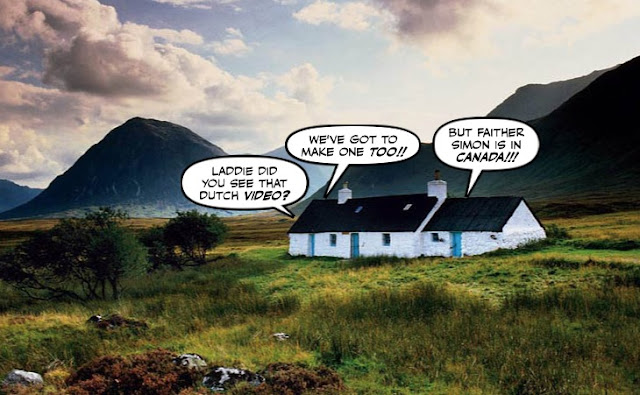 And it could take a while. Sad.

But at least I'm happy and proud to report, thanks to a tip from my friend Martin, that at a Robert Burns poetry competition in...er...New Zealand, Lorna Wallace of Kilmarnock won first prize !!!

With this poem about Donald Trump, or as Lorna calls him, the "tangerine gabshite walloper."

And although if you don't speak Auld Scottish, it might be a wee bit hard to understand.

I still think it has the best message we can send to the Americans in this troubled time, when fascism looms large:

Let’s therefur no despair an’ greet,
Or see this outcome as defeat. Let’s wait an’ watch this bampot
Flap his hawns an’ squirm
When presidential pressures
Crush him like a worm.

Don't let the Orange Oaf get you down. Just hang on to your values.

For they will defeat him, if he doesn't destroy himself first.

So now I'm waiting to see whether the French can match that one eh? 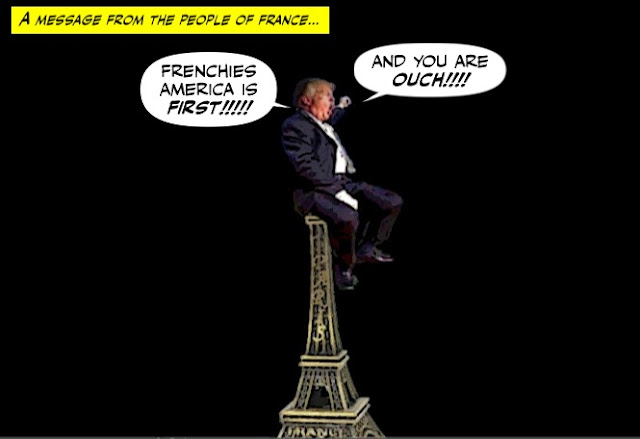 Hands across the Atlantic.

And let's all help impale that ghastly bully on his own petard...

Simon, I fear you are overlooking the problem at home...

Here is an interesting look at a recent petition that seeks to keep Donald Trump out of the United Kingdom over this stance on the seven nation entry restrictions:

Simon do you eat every candy offered you without discrimination? Trump is what he is a walking talking con man with no solid ground. However do not take away the fact that he is not a puppet so the knives are out. Constrast Trump to GWB. How differant would they be or even Romney?

Trump said on broacast TV that America was a killer nation, to me thats progress.

Clicked on "here" and laughed so much my stomach hurts. How to get over Trump and the stress it all creates: go look at those videos. they're clever!

Political Junkie, Trump ought to be kept out of the U.K. because if he goes he will be meeting with members of the House of Winsor, of which the Queen if the head. Now, the Queen is also the head of Canada and a few other countries. Do we really want the head of our Monarchy meeting with Trump and some how lending some legitimacy to him? Not so much.

wonder if they let Trump see all of these cartons?

hi anon...yes, I haven't had the time to write as many posts as usual, and because of that I've focused on the biggest story in the world, the horror of Donald Trump. The problem is I'm studying for an exam, and at this time of the year whenever I have some free time all I want to do is sleep. ZZZZZZZ.
But things should start getting back to normal next week, and hopefully I can resume my regular programming....

hi political junkie...yes the Brits are putting on quite a show of defiance, and hopefully both Trump and May can be embarrassed. After the way the new Thatcher prostituted herself shamelessly, it's only what she deserves. And as for Trump, I suppose he could meet May at one of his ugly golf courses in Scotland. But I wouldn't recommend it....

hi Steve...I don't eat candy, but either can I accept a walking talking con man as president. Especially one who is by many accounts a walking talking lunatic. You take his statement that America is a killer nation as mere recognition. I take it as a warning...

As Keith Olbermann said, in the history books Trump will have an asterisk after his name as President.

I can't see Trump as President even 6 months from now. The 25th Amendment.

Trump tweeted yesterday that any negative polls about him are fake news. This man is not completely there.

hi e.a.f...I'm pretty sure his clipping service doesn't include those cartoons. From what I read his flunkeys are terrified of him. He only reads two newspapers a day the Times and the Post, as well as any magazine with his picture on the cover. And gets all the rest of his news from cable TV. So needless to say we're in trouble.... ;)

Trump's ban on Muslims is the greatest recruitment tool for ISIS ever! How many of these 7 countries have citizens who have attacked America in some way? Zero.

Now if there is a terorist attack on American soil, Trump will get blamed for inciting hatred against foreigners. But he would turn that around and say that proves he needed to have a ban on those 7 countries, and add more countries to the list, such as Canada! 8-)

The cons and con media are lying about the Prime Minister. The left has the stench of Jill Stein on it these days. We are in trouble.

I was reading some information from an American Veterans organization. They did a video and paid to have it run on Morning Joe, which is the show trump watches in the A.M.

Trump obviously is having trouble with facts, but then ........it worked for Hitler also,.