Donald Trump and the Ghost of Richard Nixon 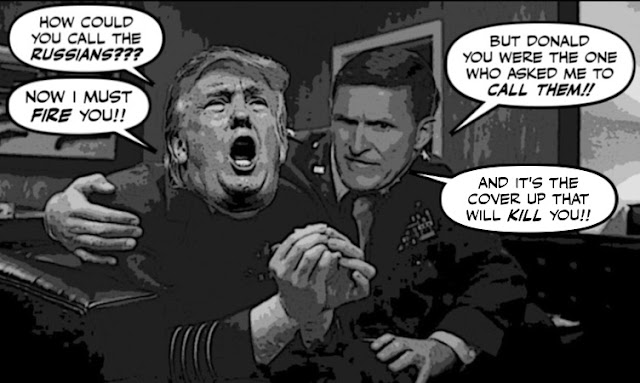 If the Mad King Donald thought that Mad Mike Flynn's sudden departure would end his so-called "RussIan problem," it appears he was sadly deluded.

For that problem just keeps getting bigger and bigger.

Dan Rather is now comparing it to the Watergate scandal, and calling for an independent investigation.

"Damn the lies, full throttle forward on the truth ... We deserve answers and those who are complicit in this scandal need to feel the full force of justice."

And as for the Mad King Donald, he's growing angrier and angrier. 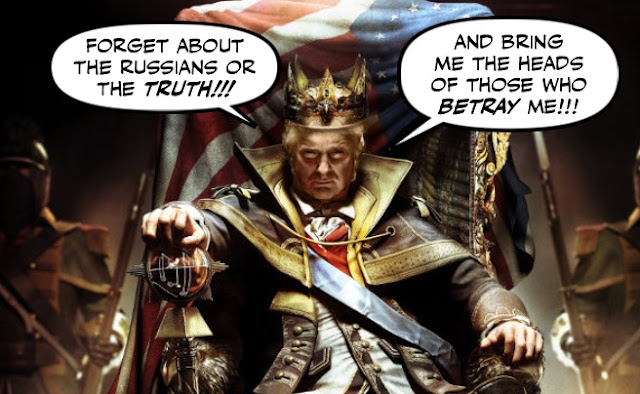 Calling for the heads of those who would dare expose the truth.

And judging from his latest twitter explosion this morning growing crazier and crazier.

But then who can blame him when the revelations are so devastating?

And even Republicans like David Frum are pointing out why the Flynn resignation matters.

The question here is not about the Logan Act: “Did Flynn conduct U.S. foreign policy in a too hasty way, without waiting for his formal swearing in?”

The question is whether a senior American official was compromised by his relationship with a foreign government. And, even more troublingly: Are there others? And even more urgently: How high up the chain of command does Russia’s influence go?

While this counterterrorism expert claims the real question is who told Flynn to call the Russian ambassador?

Who told Flynn to call Sergey Kislyak, the Russian ambassador to the United States? Because I’m convinced Flynn didn’t do it of his own accord. Flynn is a bit player in a much larger story regarding the president’s relationship with the Kremlin, and it’s this story the press needs to focus on.

It strains credulity that someone with such limited experience was acting on his own initiative when he spoke with Kislyak on December 29, the day of the sanctions announcement. If, as reported, he called five times in a single day, then he was on a mission, and probably not of his own devising.

If Flynn didn’t initiate the discussion, who did tell him to call Kislyak? More than that, what is the nature of Trump’s relationship with Putin, and did the two collude on the hacking of the election?

As for me, I'm not surprised that any of this is happening. Or that stories like this one are also being leaked to the media.

For ever since Trump dumped all over the CIA and other members of the intelligence community, and suggested that they were trying to turn America into Nazi Germany.

It seemed to me that it was only a matter of time before his words came back to haunt him. 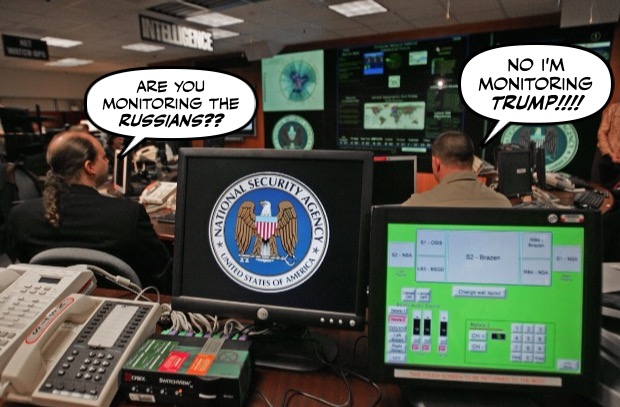 There are now reports that the CIA is not sharing all it knows with Trump, fearing that there are Russian spies in the situation room.

And if the steady drumbeat of revelations continues, and the pressure to impeach Trump keeps mounting.

It also seems to me just a matter of time, before the ghost of Richard Nixon also comes back to haunt him...


And here's hoping the ghastly story of Donald Trump. 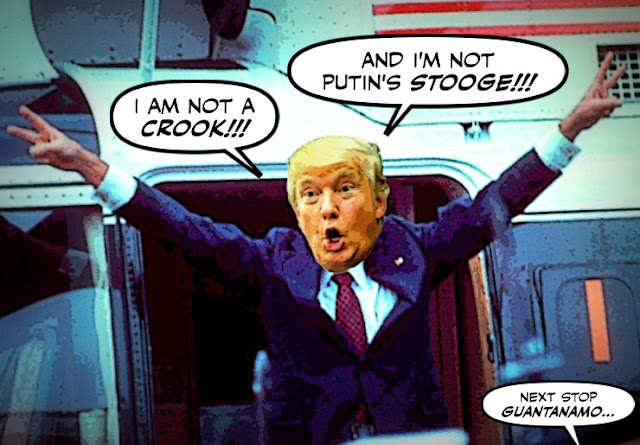 GOP get to choose, either pull the pin and end it, or go down as the biggest traitors in the history of the United States. Is hitting the New Deal or stripping people of their health insurance really worth that?

And still the Oaf of Office keeps dumping on his intelligence agencies. That will surely empower them to keep digging for more intel on the Trump/Putin bromance and hopefully find the smoking gun that will topple the big dummy.
Next up, The Queen of bullshit, Kellyanne Conway.
JD

HE WILL DIE IN JAIL

of course "stripping people of their health insurance" is really worth it. you see health insurance is communist. Putin isn't a communist so its all o.k. The GOP isn't going to pull any pin. they want to hang onto their jobs as long as they can. if they admit they were wrong in supporting Trump, they may loose their positions, its always better to keep your mouth shut and collect the salary. about the only one who is going to be upset is McCain

Trump's tweets don't even make sense. It maybe that he is starting to loose it.

PBS has done some interesting interviews with people in the foreign affairs field, etc. and what is clear is that Trump and his gang don't have any procedures in place to deal with anything. So those who ought to be briefing the president aren't, there doesn't appear to be any focus on what is more important than something else. What we have here is a country running on its own steam without any leadership. It would appear the federal government is being run by the people that work there without much in the way of direction. That can go on for some time, until there is an incident or emergency. Russia has been flying low over some American war ships out there. Russia is testing the waters and Trump doesn't have any one in place to make recommendations. He would be better off to phone Bush and ask for his former staff. We may not have like what they all did, but at least they have an idea of how its supposed to work.

As to the general calling the ambassador, that is interesting. If they two didn't talk to each other a whole lot before this, then it is doubtful the general did it on his own. so the question may be what did Trump know and when did he know it. Not all the tweets in the world are going to keep Trump from having to answer questions.

I'm hoping that Ryan et al realize that their agenda is not worth Armageddon.

Listening to CBC about how many are investing in fall out shelters, I feel sad. I'm old enough to remember this silliness. Like Kruschev said, after the bombs, the living will envy the dead. Let's just do what we can to avoid this.

Although some are coming around, the GOP needs to stop their self serving, head in the sand, ways.

I dislike labels of "left" and "right", because they just polarize people. I am more about "sensible". At the end of the day, we 98 percenters just want to live our lives in peace.

Cheers Simon! Am appreciating your blog and comments from others that follow you (as always).

hi anon...I hope the Republicans understand what their collaboration with Trump will eventually mean for them. I have great faith in the American people, but I'm afraid unless they drive that message home, the GOP will play along until they are facing electoral disaster...

Long term it would probably play out well.

hi JD...yes, as I said in my post, threatening and demeaning the U.S. intelligence community not only threatens the security of North America, it's sure to boomerang on Trump and his flunkies. If there is dirt to be found on Trump, and I'm sure there is, they will be highly motivated to find it. So he's not just the worst president the U.S. has ever known, he's also the dumbest...

hi anon...that's quite a statement isn't it? And I might go one step further and paint it on a wall in my house, under the portrait of Lord Hog himself. At this point I too can't think of a more encouraging slogan... ;)

hi e.a.f...I know, the tweets don't make sense , and neither does Trump. One day we are told he fired Flynn after losing confidence in him, and the next day he says he's a good man and blames the "fake media." I don't want to use the term lightly but the man is a maniac...

hi TS...thanks again for your support, and I must say I need it. I very much fear that we are heading for war, if only to try to distract us from all the mistakes the orange oaf is making. The departure of Flynn is something to celebrate, but as long as people like Bannon are still whispering into Trump's ear, none of us are safe...

There can not be better relations between Russia and the U.S.A. because Putin is running Russia. He has been keeping /Assad in power and killing children. That doesn't make for a good foundation. Putin is never going to change. He will always be evil, just as Bannon is always going to have a racist attitude.

Is The Trump White House High? | The Resistance with Keith Olbermann | GQ
Published on Feb 16, 2017
https://www.youtube.com/watch?v=2IEBSxXFmRI&t=10s

Tapper to Trump: You won. Get to work, stop whining
https://www.youtube.com/watch?v=CcSQmkQM4NI

Get the tiny handcuffs ready...