Steve Bannon and the Undermining of Pope Francis 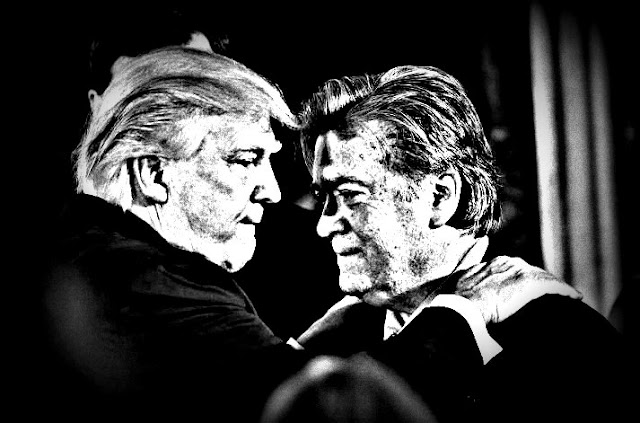 Much has been written recently about Steve Bannon, Donald Trump's closest adviser, and the man many believe is the real president of the United States.

The alt-right fanatic who believes that an apocalyptic "cleansing war" is coming, and is obsessed with global destruction.

But did you know that Bannon's fascist tentacles also reach into the Vatican? 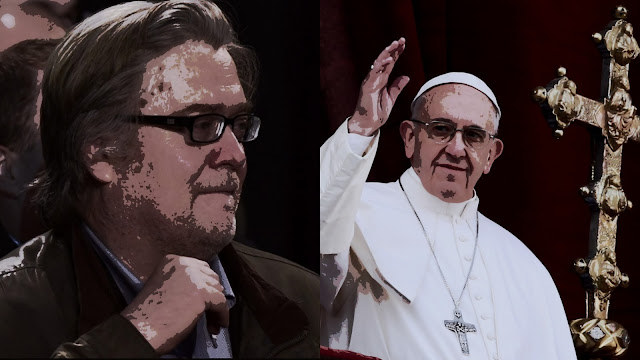 And that he is also obsessed with undermining Pope Francis.

When Stephen K. Bannon was still heading Breitbart News, he went to the Vatican to cover the canonization of John Paul II and make some friends. High on his list of people to meet was an archconservative American cardinal, Raymond Burke, who had openly clashed with Pope Francis.

Just as Mr. Bannon has connected with far-right parties threatening to topple governments throughout Western Europe, he has also made common cause with elements in the Roman Catholic Church who oppose the direction Francis is taking them. Many share Mr. Bannon’s suspicion of Pope Francis as a dangerously misguided, and probably socialist, pontiff.

And while this article suggests that Francis is holding his own, Donald Trump's election has emboldened his enemies...

For many of the pope’s ideological opponents in and around the Vatican, who are fearful of a pontiff they consider outwardly avuncular but internally a ruthless wielder of absolute political power, this angry moment in history is an opportunity to derail what they see as a disastrous papal agenda.

And in Mr. Trump, and more directly in Mr. Bannon, some self-described “Rad Trads” — or radical traditionalists — see an alternate leader who will stand up for traditional Christian values and against Muslim interlopers.

And to understand the reach of the right-wing conspiracy, or understand what kind of a fanatic Bannon is, all you have to do is watch this trailer of a movie he produced.

Which couldn't be crazier or more deeply disturbing.

Bannon is on record as saying that a war with China is "inevitable."

The Chinese have got the message, for this is how the China Daily is portraying him and his equally deranged leader... 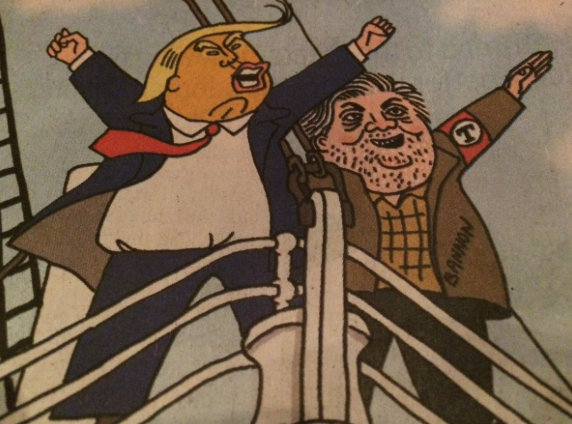 And the big question is, do Americans understand where Bannon would take them? And the urgent need to remove him from Trump's inner circle.

For if they don't, war will be inevitable.

And they will lead us all to disaster...

First of all, some Catholics do not consider Jorge Bergoglio to *be* the Pope. Indeed, if there was coercion applied against Pope Benedict XVI to try to get him to resign, then his resignation was invalid, no matter how much he may personally insist otherwise.

That would make Jorge Bergoglio into a kind of Pope-regent, but not the Pope.

Second, if the Church is what she says she is, then Jorge Bergoglio will at some time in the future be anathematized and condemned as a heretic.

Jorge Bergoglio does not have the Catholic faith. He is a heretic. He is almost certainly an apostate as well.

All of this was evident before I'd heard the name Steve Bannon. He doesn't have to undermine the man claiming to be Pope; Jorge Bergoglio and his gang of pedophiles (check who stood with him on the loggia when he was "elected" and realize that one of those guys is on tape silencing a victim of clerical sexual abuse) have shown themselves repeatedly to be the enemies of Christ.

... he is also obsessed with undermining Pope Francis.

I enjoy your blog, Simon, but admit that I'm disappointed that you've gone for the low hanging fruit of the Trump administration while ignoring Mr. Trudeau's reversal on electoral reform. I'd be interested in knowing your thoughts on this subject since you have traditionally been a vocal advocate for electoral change.
js

Looks like you really stepped into a cow paddy this time Simon. Had no idea the devious lefties were expending all that effort to undermine the Catholic Church. Mistakenly thought that when our governments separated church from state law we were free to worship as our conscience dictated without fear of government sponsored retribution. Guess I was mistaken and the battle still rages between the diabolical progressives and the Rad Tards. Just one big conspiracy ... first no more heretic burning .. then discovery the earth is not the center of the universe... then possibly Darwin and the human genome but DeVos is going to set the record straight on that one. It seems that those crafty pedophile loving lefties will not rest until religious beliefs are updated to marginally include some current scientific and social reality.

Unfortunately it will not matter if Trump and his ideologues blast us back into the stone age or out of existence. But then again that's impossible because God and right are on our side. How comforting!
RT

I agree Simon has been reticient to call Trudeau out. Come on, Simon!
All my adult life I have voted Liberal (federally) in every election (with the exception of 2006), and there is a very real possibility they will be demoted to second or even third place in the next election unless Trudeau reverses course
and has the courage to submit legislation by May to change the first past the post voting system.

If someone betrays something such as a promise, they do not do what they promised:

hi anon... I'm afraid you must be confused, I am an atheist, so I have no idea what you are talking about. However, whatever you say Francis is the duly elected Pope, and I guess you must be an embittered follower of the former Nazi pope Ratzinger. So you must be a heretic, and I don't care to discuss the situation with you further...

hi anon...well since a Ranger's supporter once stabbed me for trying to defend a Catholic friend, I wouldn't be surprised. Those heretics are dangerous and like Rangers they are going to Hell... ;)

hi JS...I'm glad you like my blog and I'm sorry you are disappointed I haven't written about the electoral reform fiasco. But the Trump administration is no low hanging fruit, not when it threatens our very existence. The main reason I haven't written about the electoral reform situation is that I am studying for a big exam and have neither the time nor the energy to deal with such a complex situation. I might try to do that next week after I sleep for about three days. But I doubt you will be pleased with what I have to say, if I ever say it, because I am pissed off at both the Liberals and the NDP. I am annoyed at the Liberals for botching up the whole issue in the manner of buffoons. And I am annoyed at the NDP for having agreed to hold a referendum, which as you must also know I was always dead set against. And for a very simple reason. A referendum would almost certainly have maintained the FPTP system. And after a divisive debate and about half a billion dollars spent, would have buried electoral reform for at least a generation. As it is the idea of electoral reform is still possible although not in this mandate. So one might argue that albeit unwillingly Trudeau saved electoral reform rather than destroyed it. And the idea of holding a useless referendum at a time when Trump is threatening to dismantle the economy strikes me as madness, and I suspect most Canadians share that view at this time. That said, I understand the disappointment of many NDP supporters, since I did vote for them in the last election.
But the road to hell is paved with good intentions, and what really enrages me is that nobody but nobody in that so-called process bothered to suggest that 16 and 17-year-olds be given the vote as they are for example in Scotland. For what good is it coming up with a new system when not enough people are bothering to vote. And EVERY scientific study shows that the sooner young people are included the more likely it is that it will become a life long habit. So as far as I'm concerned the whole process was a farce, and I'm not about to stick my head out for something that ultimately only favoured my mortal enemies the Cons. I'm sorry if I disappointed you again, but I march to the beat of my own drum, my motives are pure, and the truth as I see it will set us free...

I know... everyone you don't like is Hitler. Also, evidence... What's that again?

If you're an atheist, why do you care about Steve Bannon influencing an institution who's claims you challenge?

I know, it's because you're a disingenuous leftist, who is most of all not honest with himself.

hi RT...Gawd what did I do to deserve that? I may be an atheist, but I can't help feeling I'm more of a Christian than that Catholic fanatic. I happened to be raised with mostly Catholic friends, and know a couple of very nice Cathoic priests who are more concerned with taking care of the poor and the sick, than they are using inhuman theology as a weapon against others. However, if the situation with Trump continues to deteriorate, I may reconsider my atheistic beliefs, just in case there is a god, for hedging my bets can't hurt... ;)

All that, as well as these from my collection:

https://medium.com/defiant/steve-bannon-the-man-the-myth-the-asshole-8455cc6548af#.gw9ubwns9
Should the world survive what the Americans have wrought, it may be time for democracy to consider testing basic functions as a pre-requisite to voting.

Half of American adults, apparently* can't about 9th grade level. They get their info from memes, pictures and video. Bannon & affiliates are very, very good at distributing material to this market, where premises, reason and conclusions don't exist. This is the base that Bannon/Breitbart has tapped into, to wring out an electoral college vote. (But not quite the direct majority of Americans ... yet)

hi David...if you don't mind I'll just refer you to the answer above. I find this whole electoral reform fuss, and the claims of betrayal to be absolutely absurd. The promise to change the electoral system was not a major campaign promise for most Canadians, Trudeau was elected to get rid of Stephen Harper, and that promise he accomplished. As I told JS I agree that the Trudeau Liberals botched the whole process, but it was Nathan Cullen who almost sank the idea of electoral reform by collaborating shamelessly with the Cons and putting the narrow interests of his moribund party above the higher interests of our democracy. The sad fact is that Trudeau may have promised more than he could deliver, but the idea of a referendum was and remains a non-starter for me. And since none of those old farts thought to include young Canadians in their plans, I couldn't care less how they feel now. And don't delude yourself, the electoral reform issue will play a very small part in the next election, Trudeau will win it easily because he has no progressive opposition, and he will be judged by how he manages the economy, and deals with Trump. And if by chance you and your gang of hysterical covenanters do manage to raise the popularity of the NDP a bit, all you will do is slightly increase the chances that the Cons will be elected. And for that you will have nobody to blame but yourselves...

Everything I think of the ERRE issue, too!

Now is not the time to be messing with process, an issue that political bullies would maliciously turn & twist to gain sound-bite ascendancy.

However, I would wish for compulsory voting, if not next time, then for the time after that.

Higher voter turn-out and strategic voting were the effects that shifted the game for Trudeau's win.