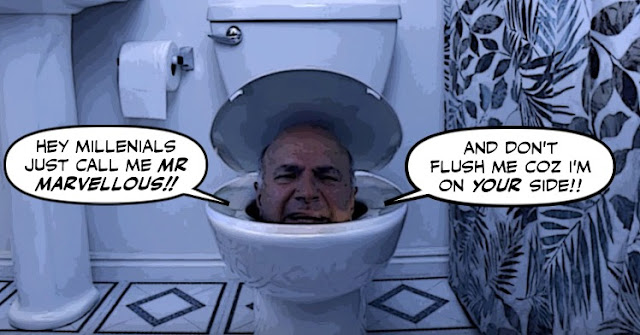 I must admit I was amused to see Kevin O'Leary claim that he could get most of the millennials in Canada to support him.

And make him the country's next prime minister.

When every millennial I know thinks he's just another Con clown, who should be flushed like all the others.

O'Leary's last chance to impress them came and went about forty years ago. 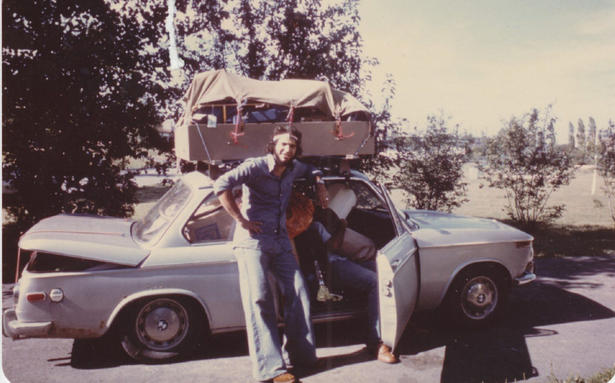 When he was a still a hippie.

And sadly for him, a poll that was read to the faithful at the Manning Conclave this weekend only confirms that the Cons are the LAST party millennials are likely to support.

Researchers brought a sobering message to the annual convention of the right-leaning Manning Centre Friday: most voters under 35 aren't connecting with the conservative movement, and if it wants to reach them, more than just messaging needs to change.

And to make matters worse for O'Leary and the Cons, they do seem to like Justin Trudeau.

A lot. Or as about as much as they ever did.

Compared with our post-election survey in October 2015, the Liberals are down 2, the Tories are up 3, and the NDP is down 5. The Greens are up 5.

The Liberals hold a wide lead among Millennial men and women and across all age groups.

With almost as many supporting the Liberals as those who support the Cons and the NDP combined.

And what's also revealing is that despite the frenzied way the NDP have been attacking the Liberals, another Abacus poll suggests that when it comes to the big picture, not much has changed since the last election. 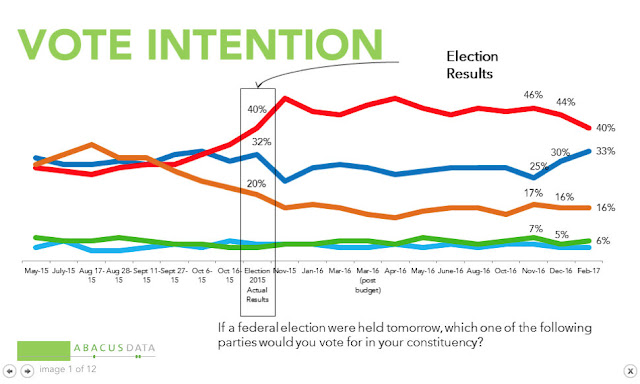 Nationally, 40% would vote Liberal today, the same number as supported the party in last October’s federal election. 32% would vote Conservative, also equal to the result they achieved last election. Just 16% would vote NDP, which is four points lower than the party’s 2015 election result.

And the only party that is less popular than it was back then is the NDP.

For even in BC, where the Mulcair Party did get a bit of a boost... 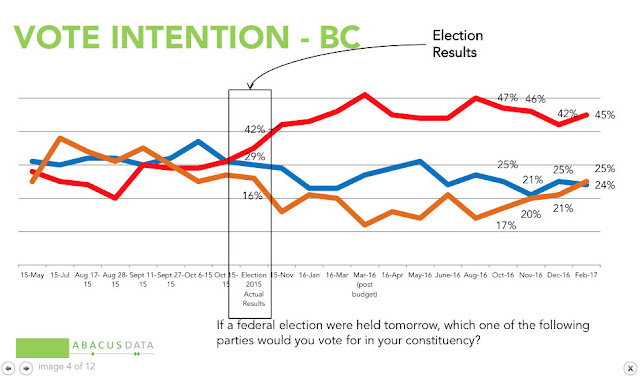 Which suggests that maybe just maybe, the NDP should start telling us what they are for instead of just what they're against... 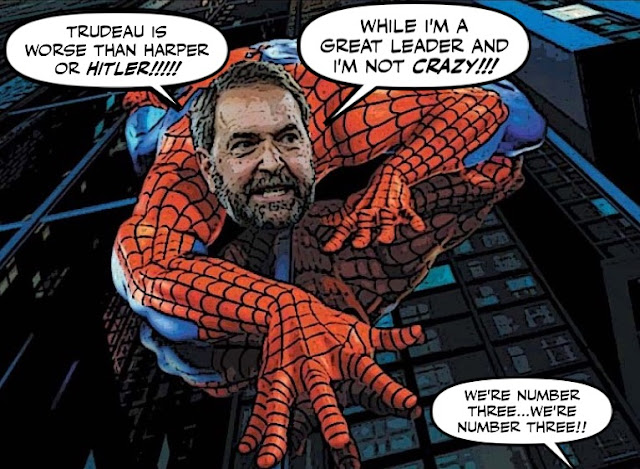 Or understand what Stephen Harper never understood; the more viciously you attack Justin Trudeau, the more popular he becomes. 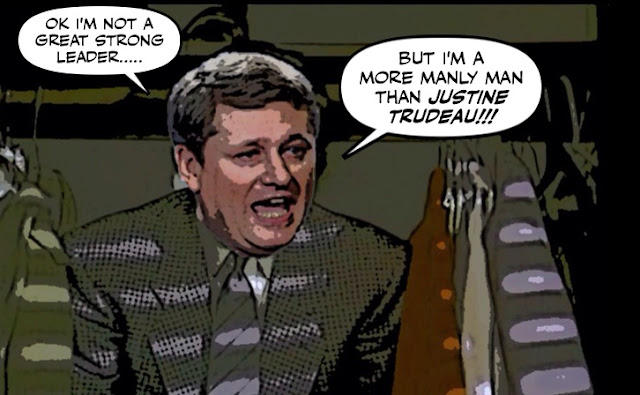 As for Kevin O'Leary, he needs to understand that his past is probably going to come back to haunt him over and over again.

And that like all the other absurd old Trudeau haters in this country, he too should probably just give up, and/or kiss Justin's butt.

Because it's called generational change, whether they like it or not.

And it's probably going to keep Trudeau and his Liberals in power for a long, long time... 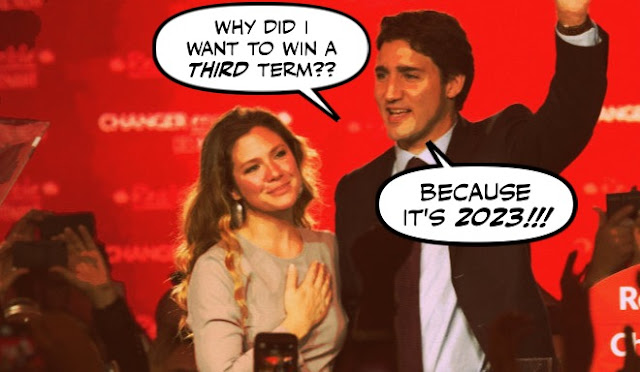 Great article as usual Simon, but it is the ndp, and not the cons who are the party that millenials are least likely to support.

The U.S. has their pussy grabber and now we have a butt grabber

According to your vote intention list it looks like the Liberals are down 6 points, and the Cons up 8 points since November. Funny how you failed to mention that. Nice butt though.

I also wish millennials knew how much debt the Trudeau government is getting us into and that we're going to have to pay it off for years and years to come.

Oh he's a liberal, so of course he would forget to mention that. Can't upset the Little Prince don't you know.

Oh and how do you plan to save the Ontario Liberals?

Anon 5:18 - Just look at the graph that Simon provided. It's mentioned.

"I also wish millennials knew how much debt the Trudeau government is getting us into and that we're going to have to pay it off for years and years to come.

"Funny how you failed to mention …" the $165 billion in debt that the Harper Cabal saddled us with.

Spending money to make money is not necessarily a bad thing. At present our Federal debt to GDP ratio is around 32%, roughly equivalent to the best of the Harper years and better than those years that touched 40%. Under Harper's watch our balance of trade went from positive to negative to the tune of around 20 billion per year and never recovered. There is some sign of this turning around as 2017 numbers are positive but to early to tell especially with over the top Trump inspired protectionism. Perhaps the liberals will fail to turn this around but the strategy of pushing expenses down to the provinces,building more prisons,selling guns and oil while buying value added finished goods just did not seem very visionary.
I guess if you can't grow dig or pump it and have to plan around human capital, networking, cooperation and a myriad of other soft issues it just gets way to complicated for a good Con be bothered with. Better to keep it simple and offer up a human sacrifice or two when it doesn't work
RT

This is a hard truth that right wingers conveniently forget.

Why November, MC? Simon was comparing current poll numbers to election day. Arbitrarily picking the lowest point for comparison is just cherry picking data. You could also have pointed out that the Conservatives are up 15 points since they ran as the Reform Party back in the 1993 general election! Hurray for them! The NDP should be happy too, they're up 10 points! Yay! Yay for everybody!

hi anon...I did point that out, you can also see it in the charts. And it certainly shows that the NDP is in really bad shape. However I'm not surprised, I remember how Mulcair treated the Youth Wing, and what does surprise me if that there are any young people left in that party....

hi anon...yes, I saw that, and it won't help O'Leary. I'm pretty sure most of his support comes from males, but after that he can forget about the female vote. He's not as bad as Trump, but he is a vulgar buffoon...

hi MC...it's clear from the chart I provided, and I have mentioned the narrowing of the gap before. But still, it only means that Trudeau is as popular as the day he won the election, and a year and a half later that's still remarkable. And with the NDP as low as they are, if an election was held tomorrow, the Liberals would probably get even more seats than they did last time....

hi MC...the Liberals are trying to create jobs for the millennial generation, and since the economics of austerity created almost none, what do you expect them to do? If more jobs can be created, the economy will do better, and the debt will be easier to pay back. There is no other way....

hi RT... As I told MC, I don't have a problem with spending money to make money. The fact is austerity has been a disaster for young people, Big Business has done nothing but sit on their profits, so investing in infrastructure is one way of at least providing lots of working class jobs. And since Trump is planning to spend trillions on similar programs, MC shouldn't be complaining too loudly... ;)

Good. All the NDP does is split the vote.