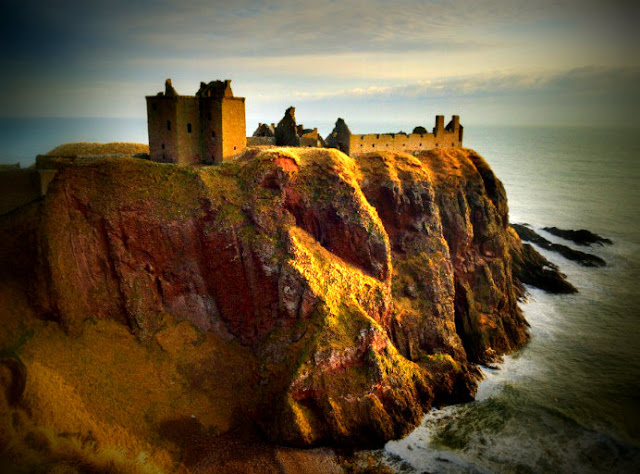 Scotland is a small, peaceful country, but one with a proud history of resistance dating back about two thousand years.

The people of that land have had to battle all kinds of invaders, from the Roman legions of the Emperor Hadrian, to in more modern times, the vulgar presence of the mad would be Emperor Donald Trump.

So these days when we too are called to resist him, and all can appear so dark and gloomy.

I thought you might enjoy Samantha Bee's humorous look at the original Trump haters.

You know, seriously, the only places Donald Trump can strut around safely in Scotland are his hideous golf courses.

For anywhere else the bloated bawbag would be run out of town and village.

Fight him fiercely, with a smile on your face. Never give up.

Resist him and his fascist legions, until the day they are defeated...

Always remember, the Scottish golf courses are losing money, 10 % a year. A well run business should make 10% a year, so Trump is managing to underperform by 20%. Trump is running another business into the ground.

Thank you Simon! That clip is brilliant. I almost forgot how worried I am.

The Surprisingly Easy Way to Get Rid of Donald Trump | The Resistance with Keith Olbermann | GQ
https://www.youtube.com/watch?v=Gnnj_YjdJgs


00:35 to 02:21 re: this weekend's meeting between Trump and Japanese Prime Minister Minister Shinzo Abe.

Keith Boag reports: "He brought the perfect gift for Trump, a golf club, a golden driver reportedly worth more than $3500."

Abe said through an interpreter: "We will play golf together. My scores in golf are not up to the level of Donald at all."

Boag: "Abe may not be much of a golfer, but he plays *this* game very well."

Trump pledges 'even closer' ties with Japan in meeting with PM Abe
http://www.cbc.ca/news/world/trump-abe-japan-meeting-pledge-closer-ties-1.3977051

hi rumleyfips...I try to remember that, but when I hear him say he's half "Scotch" instead of Scottish, I hear bagpipes in my head and I want to go charging after him... ;)

hi TS...I'm glad you liked it. I was a bit worried about the language, because Scots don't swear like that unless they've had way too much to drink. They are a relatively quiet people, but Trump just brings out the beast in them... ;)

hi Jack...I'm glad you liked it. It did have some funny moments didn't it? I find it hard sometimes to laugh at Trump when he's in Scotland, because I know the coast line he's ruining like the back of my hand. But I can never get enough of that guy with the orange balloon rubbing the top of Trump's head, and making his hair stand on end... ;)

hi David...OMG. I hadn't realized Abe was prepared to flatter Trump quite that much. A golden golf club? Let's hope Justin Trudeau has something just as golden when he goes to visit Trump. Will it be a golden hockey stick or something I dare not mention.. ;)

"My only regret is I didn't knock him on his arse when I met him."

What a fond old memory that brings to mind. My granddad used to say, "Put him on his arse." His family farmed somewhere near the city of Perth. Does each locality have its distinctive choice of verb when expressing this typically Scottish sentiment? (At least I think Poppy said "put".)

hi John....I think most of the swear words are the same all over Scotland except in the more Gaelic influenced places. But dialects or accents can vary quite a bit, and just about everybody agrees that the language they speak in Glasgow is really hard to understand. However, I wouldn't say that to anybody in Glasgow, because some of their police officers are the toughest looking cops I've ever seen, and many of the young men in the poorer areas are, or were just a few years ago, heavily armed with knives... ;)