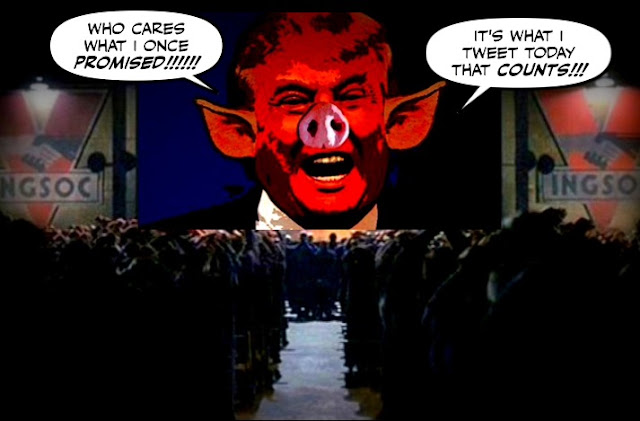 It's fashionable to compare to Donald Trump to Big Brother in Orwell's 1984. And there are some disturbing similarities.

President Trump on Friday moved to chisel away at the Obama administration’s legacy on financial regulation, announcing steps to revisit the rules enacted after the 2008 financial crisis and to back away from a measure intended to protect consumers from bad investment advice.

And give the billionaires on Wall Street everything they ever wanted. 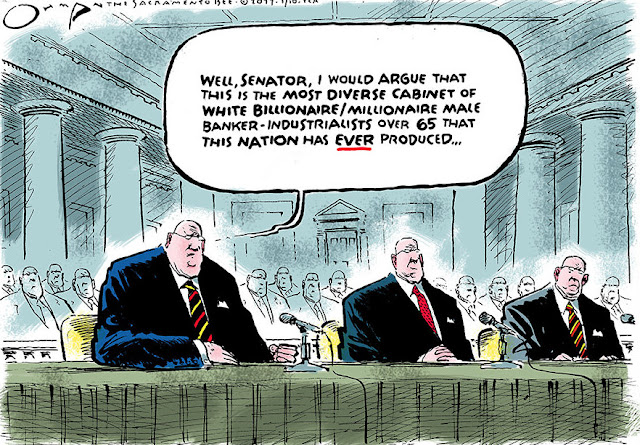 Or for that matter, who else would claim that he's just trying to keep America safe?

On Thursday, internet racists celebrated another perceived victory: Reports that President Trump will soon remove white nationalist groups from a federal effort to study and neutralize extremist radicalization, and rebrand the program to focus solely on groups associating themselves with Islam.

Since 9/11, attacks from right-wing organizations have killed far more Americans than groups claiming to be Islamic, according to data from the Southern Poverty Law Center.

Which beggars belief, and in a normal world should have the orange oaf charged for collaborating with terrorists.

Along with his sinister alt-right adviser Steve Bannon, from whence that directive almost certainly came... But strangely enough, this story makes me wonder whether we're right to compare Trump to Big Brother... 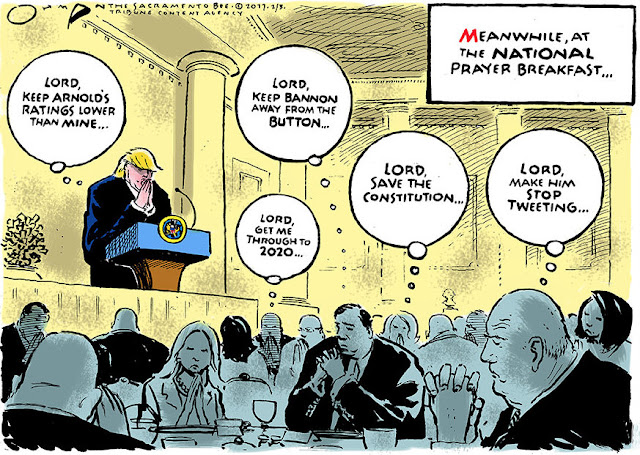 For it was a new low in the orange oaf's squalid presidential performance to date.

One that has to be seen to be believed...

This follow up tweet made me wonder whether Trump's brain is as shrunken as his tiny groping fingers...

And the way he is degrading the presidency and corrupting his country, suggests that Aldous Huxley's Brave New World might better describe our dystopian Trumpland than Orwell's 1984... 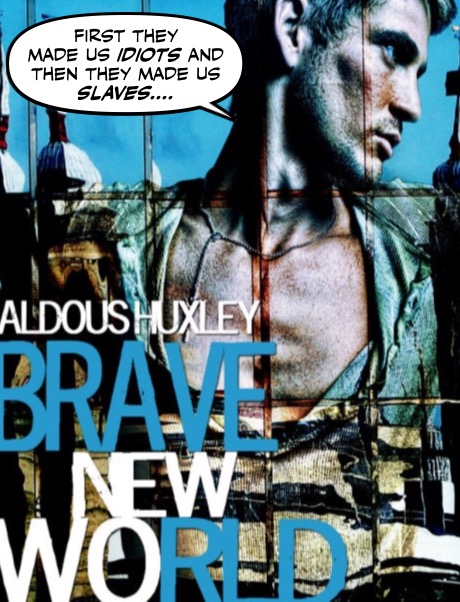 And that the late American writer Neil Postman was only too prophetic.

For doesn't that sound familiar?

Most Americans are not THAT easily fooled.

Even many of his own followers are now sorry they voted for Trump.

And when the regretful join up with the already angry... 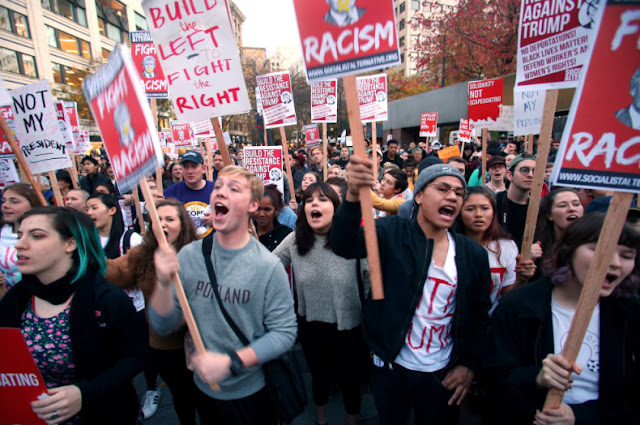 The future WILL belong to us.

In the meantime, for another glimpse of the dark future Trump and his legion of religious fanatics would have us live in.

Don't forget to check out The Handmaid's Tale, the TV series, coming soon to Hulu...

And then of course RESIST as if there was no tomorrow.

Don't let them drown us in idiocy or madness.

And help destroy Big Brother and his Brave New World as soon as is humanly possible...

Before we are all living in The Road...

Just as I expected the protests have died down. Resistance is futile. It's going to be a long 4 years, Trump is just getting started.

If the future's going to belong to you, how many kids do you have? How many children do progressives actually have? Say compared to right-wingers...? How many left-wing families do you know with more than three children?

If you want the future, you might want to get skeptical of the demographic affect of abortion, and birth control... You won't do that of course, but it's a thought.

It's nice to see that those who voted Trump and don't have shit for brains are finally seeing the oaf for who he is and what he stands for($$$$$).
Expect those numbers to increase as Trumpland becomes even more bizarre and more allies abandon him. It'll be Trump vs the world and vs the resistance from within.
The excruciating realisation that he is despised by billions will slowly cause his head to explode, unless of course The Terminator introduces his face to a table first. It'll be hasta la vista Donnie.
JD

Progressive abort themselves out of existence. And who says their isn't justice in the universe.

Things were different in the distant past. If you were a homesteader there was the option of working with your neighbor even if their religion "forbade dancing" or you could decide to go it alone with the risk that if you broke a leg at harvest time you would starve. Clearly, neighborly exchange starting with small items and trust built up over years was the best option. Then along came government.. pay me and I will help you if needed. Then came ... oops I can't help to extent you think is fair because your neighbor is a slacker! And here we are, Yuuuggee gaps between perception and reality!

Is the neighbor really a slacker or is it just a convenient story to cover governmental corruption.. if the neighbor is not contributing was he trapped by discrimination that prevented contribution ... the list goes on.
Its a complicated issue but we all know or should know one thing.. people / governments that deflect promises and responsibility to minority groups have a game on the go for their own benefit. Although there are minor genetic difference between races the differences in the same race are greater. Given that the differences are minor does the government strive to create an environment that maximizes the contribution of everyone or like an athlete with a chronic strain decide to amputate and strap on an assault rifle to compensate? In the era of instant fixes and gratification, amputation certainly seems to be gaining momentum.
RT

Any evidence correlating family size with political beliefs? Or are these just more RWNJ alternative facts?

Donald Trump is Aiding the Enemy | The Resistance with Keith Olbermann | GQ
https://www.youtube.com/watch?v=_LBBb-6hEPE

Trump Fires Attorney General After Copy of Constitution Is Found on Her Computer
http://www.newyorker.com/humor/borowitz-report/trump-fires-attorney-general-after-copy-of-constitution-is-found-on-her-computer

World Leaders Receive Crank Calls from Someone Claiming to Be President of United States
http://www.newyorker.com/humor/borowitz-report/world-leaders-receive-crank-calls-from-someone-claiming-to-be-president-of-united-states

No alternative facts, liberals are both lazy, and in denial.

hi MC...you know you're starting to sound like a real fanatic, like one of the die hards who went down with the Fuhrer in his bunker. Trump's presidency is falling part after only two weeks in office. So if I were you I'd get out before it's too late... ;)

hi JD...I agree with you, I expect many more of Trump's supporters to abandon him, and when they do it will make the Republicans in Congress very nervous. They won't want to be seen rubber stamping his orders, and when they too resist him it should be enough to drive him off the deep end....

hi RT...if this insane show keeps getting even crazier, the Republicans are indeed going to have to decide whether to stick with Trump and go down with him, or perform as you say a necessary amputation. I can't be sure what course they will choose, but the way I see it we can't lose....

Things were different in the distant past.
I know I'm getting older but "distant past"?

Dad's line was “ You don't need friends but you need need neighbours”.

I'm sure that echo-chamber you, and your fellow Cuckadians have built yourself is very comfortable.

I agree Simon, but first the Democrats have to rebuild and be the people's party. They need another FDR to turn things around and reclaim their democracy.

Looks like Ray Bradbury shared Huxley's fears, given the arc of society and the behaviour of Millie Montag in Fahrenheit 451. It wasn't so much that ideas had to be stamped out for being in opposition to the status quo, but that the written word had become so neutered by then that nobody cared when the government outlawed them for the purpose of "happiness."

If there's one saving grace, it's that Trump's administration and the man himself are fundamentally incompetent, a group of jumped-up Epsilon-Minus Semi-Morons. They were crashing and burning before inauguration day, and they've only gunned the engine of the wreck even harder into the brick wall. I just hope we can minimize the damage.