The White House Dinner and the Shrinking of Donald Trump 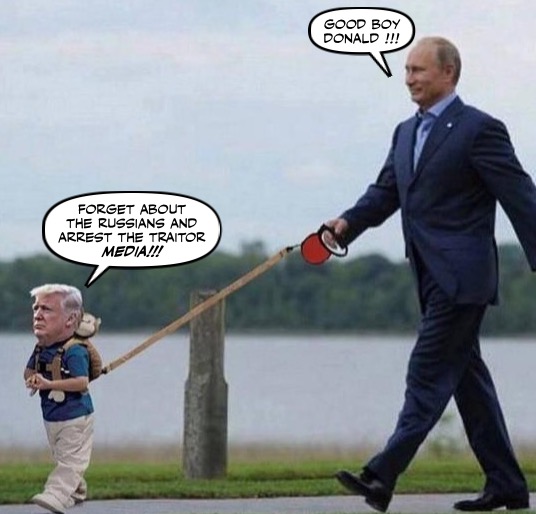 I know it's an optical illusion, but the more Donald Trump rants and raves, the more his stature seems to shrink.

He's trying to convince Americans that the media is more dangerous than the Russians.

So it's not really surprising that a day after he called the "fake news" media the "enemies of the people," he's decided NOT to attend the White House Press Correspondent's Dinner.


I asked Trump if he would be attending the White House Correspondents Dinner.
He said: "No. Do you like that?"
People cheered behind me. pic.twitter.com/5uc6kAM0FI
— Benny (@bennyjohnson) February 26, 2017


Lol. That's like not being asked to go to the prom and then telling everyone you didn't want to go anyway. https://t.co/q0UIfDB6Uq
— Katie Jacobs Stanton (@KatieS) February 25, 2017

2016
TRUMP: We need to stop being so sensitive

And even though his wild speech at the CPAC conclave couldn't have been more deeply disturbing.


This man is stoned out of his gourd right now pic.twitter.com/mlh2D36IoA
— Keith Olbermann (@KeithOlbermann) February 24, 2017


And the main reason he's skipping the press dinner is because he doesn't want to get roasted like he has before.

By somebody like Jake Tapper, who already has Trump's number...

And yes, Dan Rather is also right when he says this is an emergency, and a moment of judgement.

The time for normalizing, dissembling, and explaining away Donald Trump has long since passed. The barring of respected journalistic outlets from the White House briefing is so far beyond the norms and traditions that have governed this republic for generations, that they must be seen as a real and present threat to our democracy.

The FBI and the intelligence agencies are still investigating his ties with the Russians.

Some of his supporters are also going crazy.

It’s not just a political battle anymore. It’s spiritual warfare now. Exorcists, witches and occultists “in a number of magical groups” are announcing plans for a ritual designed to “bind Donald Trump and all who abet him.”

The rite, requiring a stub of a candle, a pin, salt, matches, a tarot card, a feather and other odds and ends, calls on spirits to ensure President Trump will “fail utterly.” It also includes burning a picture of the commander in chief, visualizing him “blowing apart into dust or ash.”

Participants apparently have the option of using a baby carrot instead of an orange candle.

So he is being diminished... 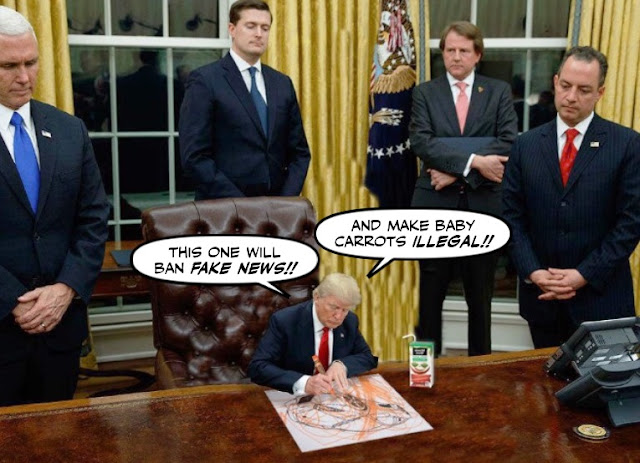 And the more he can be shrunk.

The more easily it will be to remove him from office when the time comes...

It's hard to imagine that this could go on for four years (3 years and 11 months). Excluding several news organizations from WH briefings is an insult to millions of Americans who trust those sites for information.

With 2000 unfilled positions in the WH and all the smoke and mirrors going on now, it's hard to imagine how Trump could handle any kind of crisis. Even his Cabinet picks seem immensely qualified compared to him, yet they are not fully functioning.

It's not necessarily "fake news". It's heavily biased left wing propaganda. Public trust in the media is at an all time low.

Let me give you an example. I was watching CTV news the other night and here's the top story. "Montreal has become a sanctuary city, but critics are saying that's still not enough". How biased is that? Where are the critics who say it will cause a strain on our services, increase wait times, etc?

You got the CBC running puff pieces on "refugees" illegally crossing the border. The RCMP smiling while they carry their bags across. The US is a safe country, the people coming in are economic refugees at best.

You're critical of CTV news the other night and then you praise Jason Kenney's brain fart on where? CTV news. You cant have it both ways there ~MC.
JD

Anon 10:39 - everything you stated appears to be just "reporting". Just because news that you do not agree with gets reported does not make it "fake news".

"I think it's [humour] immensely powerful. Whether it changes things very much, I'm not sure. But what I *do* know is the one thing that people in power can't abide is being made fun of. And I think the wonderful thing about humour is that it punctures pomposity. If people are very self important, they love to have a slightly solemn atmosphere around them, because they know that any kind of humour is gonna deflate that pomposity."

hi TS...thanks, I'll be buying a big bag of baby carrots the next time I go to the supermarket. Or maybe one large carrot, and a sharp knitting needle. ;)
But yes, I too have trouble imagining how this could go on for four years. And unless Trump gets a grip on reality, I don't think it will. If it's hard on us, imagine how hard it must be on him....

hi MC...In a country as large as Canada, those refugees coming across the border are like a drop in a Great Lake. And the CTV report isn't biased or "fake news." It simply reports that Montreal is a sanctuary city, and acknowledges the views of those who believe that more can still be done. While those who are opposed to helping refugees are probably too ashamed to let their views be known, or they would also be in that report....