Stephen Harper and the Fatal Gamble 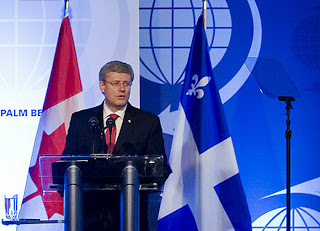 Well there he was the other day, telling a big economic conference in Montreal that his government's economic policies were a model for the whole world.

But if you look at the expression on his face as he reads his prepared lines, you really have to wonder whether he still believes what he is saying.

Whether he is still trying to fool us into thinking he's an economist. Or whether he's simply delusional.

For all I can say is some government, some economic policies, some budget bill.

Canadians are just now awakening to the widespread implications of Stephen Harper’s omnibus Bill C-38. It may be too late to mobilize against it.

A new OECD report seems to support controversial claims by NDP leader Thomas Mulcair that Canada is suffering from an economic condition known as Dutch Disease.The Organization for Economic Co-operation and Development warns in a report released Wednesday that the run-up in commodity prices is leading to an uneven economy in Canada.

A model where Alberta gets rich, and Canadian workers in other provinces get welfare, as the Cons torch our manufacturing sector, and sell off Canada to foreign interests.

A model where everything depends on the price of oil. Which makes our country dangerously vulnerable to the effects of another recession. A model for economic disaster.

The Harper Cons could have done something to spread the wealth, save jobs in communities all over the country, and prepare us for a recession. But instead they spent the stimulus money to buy votes or build gazebos. They gambled everything on Big Oil and lost. And now we're all going to pay for it. But so will HE.

For it was a fatal gamble. All Great Ugly Pretty Economist Buffoon Leader had going for him is the economy, and if it goes south he's going too.

And in the meantime every decent Canadian must join together to try to limit the damage to our country. For this is true too.

In the end Harper has his majority, and he will exercise it. He is mindful that a recent one-day protest at MPs’ offices across the country drew only 2,000 people. This isn’t nearly enough to make Harper blink.

He will need to see mainstream Canadians objecting en masse this week to his omnibus bill strategy, and to its impact on their social safety nets and the environment. A nation of sheep breeds a government of wolves.

Stephen Harper and his wolves are tearing the guts out of this country. But they are also slowly disemboweling themselves.

They fooled Canadians once.

But they will not fool them again... 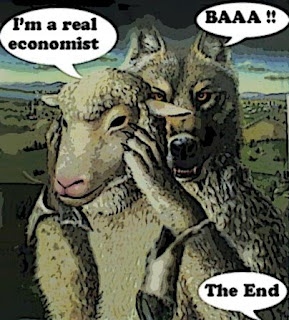 People in Canada now feel hopeless because of his 'majority' and the unions I always count on to be progressive are of course mostly silent in the face of the promise of jobs..but no job is worth destroying the environment for..no 'job' that will be temporary, at best, will be able to be enough to offset the very permanent destruction that this bill will bring down on all of us..where are the few courageous Con MPs who will cross the floor rather than sell out their country? Are there none?

Harper has merged Canada in with Communist China.

Have we not noticed, Harper is encouraging Canadians to shop in the U.S? Harper is losing billions in revenue. However, that is insignificant to Harper. He thinks he will make trillions from Communist China, off the tar sands.

Communist China has hacked into many other country's secret files. It was a terrible mistake to trust, and buy Communist China's electronic components. These country's are very worried for their country's security. The U.S. is totally pissed at Harper. They have been pulling their company's out of Canada, which really hurts Canadian citizens. Perhaps all, not because of our high dollar. I can see the U.S. removing all their interests out of Canada. I can see the U.S. cutting out all trade to Canada. They don't really need Canada. They can survive on their own. Manufacture American, buy American, as they have done so before. I can't say, that I blame the U.S. for despising Harper. They are far from the only country, furious at Communist China. Communism always lives up to it's name. Mulcair is absolutely right, the tar sands will destroy Canadian people and the entire country. However, Harper will pocket trillions, so he thinks.

I watched a program on TV, about country's setting up businesses in Communist China. They said, now this is the hard part, getting Communist China to pay them their money. Contractors at the tar sands, have one hell of a time, getting the Chinese to pay them. So, good luck to Harper on that one.Fadden of CSIS warned of China's intrusion into Canada. He specically named BC. Gordon Campbell did give Communist China our mill industry and mines. Chinese will be brought to work the BC mines as well. Seems, Fadden is exactly right.

I would think people see no reason to protest because Stevie Slime & his slimers aren't going to listen anyhow. I would suggest 10 million of us could go out & protest. All that would happen is Stevie Slime would declare the War Measures Act.

It is best to wait until the next election & send Stevie to the slime heap where he & his ilk belong. None of his slimer cons are going to vote against him or with their constituants wishes, so we can send letters, we can blog, but don't expect anything to change until election time.

hi mizdarlin...to their eternal shame there are no Con MPs willing to defy Harper. Right now they are inflamed with the arrogance of power, but they will eventually be defeated, and we will remember, and we will not forgive....

hi anonymous...Harper is indeed selling our country off to China and other foreign interests. Albertans should be as concerned as the rest of us, for their wealth is being ripped out of the ground for peanuts, and their children will pay for it.
And yes, you're right, the Chinese are notoriously bad employers, and if they bring in their own labour they will drive down wages and working conditions for everyone.
Oh well. I guess the cowboys won't wake up until they're forced to speak Chinese...

hi e.a.f....I suppose you're right, but even if the Cons won't listen we should still protest, if only for the sake of history. It happens in monst other countries, it's happening in Quebec, but most Canadians are far too passive. Protesting can also help spread the message that something is seriously wrong.So while I agree the priority is to make sure the Cons are defeated, a little noise wouldn't hurt... ;)