Mulcair and the Orange Juggernaut 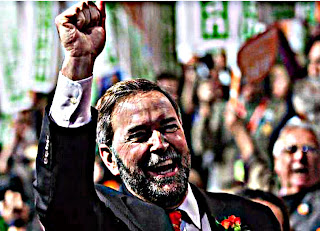 I knew that the NDP's support in Quebec would improve as soon a Tom Mulcair became leader.

Nobody hates the Con regime more than Quebecers do. And they know a fighter when they see one.

But this is still stunning.

The honeymoon of Quebec and the NDP finally starting to look like a happy marriage. More than a year after the election that led 59 NDP MPs in Ottawa, Quebecers are more than ever behind the party led by Thomas Mulcair, and it literally crushes the competition.

This is unheard of for the NDP, and "rarely seen" in Quebec even in years when the Bloc dominated the political landscape: 52% of Quebecers would vote for the NDP and if elections were held last week reveals a Leger Marketing survey prepared for Le Devoir. The Democrats leave only crumbs to their opponents: 18% for the Bloc Quebecois - a historic low - 14% for the Conservatives and 13% for the Liberals.

Because this isn't just a crushing lead, it's an orange juggernaut.

Although I suppose I shouldn't be that surprised eh? Just a few weeks ago, about 300-thousand people turned out in Montreal to mark Earth Day. 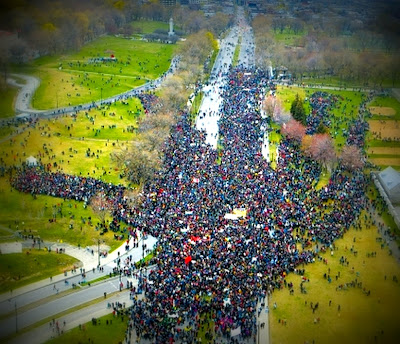 And send a message to Stephen Harper: keep your filthy mitts off Kyoto.

So all the goodies to Big Oil buried in the Con's Trojan horse budget must make them want to vomit.

“Canada’s golden age,” one MP called it. The House was in session, after dark, grinding through C-38, the Lobbyists’ Bill. Drafted in secret, frog-marched on closure, its provisions hidden from voters in the last campaign, the bill reads like it was ghostwritten at the Calgary Petroleum Club. It puts Canada dead last among G8 countries in environmental protection. C-38 is so outrageous Conservative MPs were not permitted to read it beforehand in caucus.

C-38 is a gift for oil and gas lobbyists. It repeals 20 years of environmental case law; it eliminates some 90 per cent of all federal environmental assessments, by one estimate; it tilts the rules for industry where studies are unavoidable; it deliberately fails to define “significant effect” of industrial projects. Might that be, say, a tailings pond in a lake? An open pit mine on a trout stream? “That omission is deliberate,” one lawyer told me. “Once you define ‘significant effect,’ you have to start saying ‘no.’ ”

And it can only make Mulcair more popular because he has a reputation as a strong environmentalist in the province, and the way he has attacked Big Oil and its stooge Stephen Harper is music to their ears.

The poll also shows that Quebecers are so determined to get rid of Harper that the Bloc is no longer a serious option. Which is bad news for Great Ugly Leader, because only the Bloc can hold off the orange tide.

In a time of darkness and despair, he is the leader of a party that is looking more and more like the best and only hope of driving the Cons from  power.

And when people in Ontario see how much support the NDP has in Quebec, B.C., and the Atlantic provinces, those desperate to defeat the Cons will rally behind the party. And the orange tide will become a tsunami.

Yup. As one Quebec commentator said on RDI today, the stars are aligning for Mulcair.

The juggernaut will not be stopped.

And the tyrant's days are numbered... 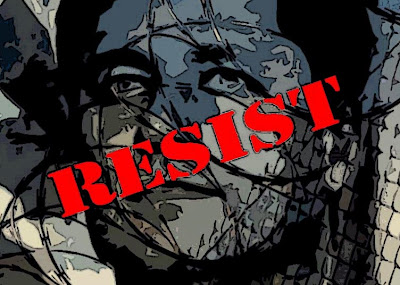 Simon, the lie that this budget is all about long term prosperity is not such a lie after all as you allude to because you see its perfectly tuned to grease the palms and the bank accounts of the wealthy 1% the rest be damned. This article 'Harper Government Destroying More Good Jobs Than It Is Creating' by Mark Taliano pretty much strips the harper lies bare. Enjoy the read:

hi anonymous...thanks for the link. I agree with the post completely. You know the scary thing is how long it took Canadians to realize what the Con's Big Oil policies and corporate tax cuts were doing to the economy. But hopefully now that Canadians are waking up we can finally do something about it. i.e. boot the Cons out of power...

We need to relentlessly harass them this summer for being Parliamentary Bullies plain and simple. They did not listen to the opposition attempts to make amendments and only bowed to the Alpha dominant male leader, harper. I've had it with harper and judging from the blogs I follow I believe its hit a critical mass and maybe we can hope for a parliamentary mass ejection, get rid of the bullies! NOW!

Harper thinks he’s sharper
But really he’s a barber
With evil thought’s he harbor’s
He wants to shave all we have in common
From our Canada, oh what a nave is he.

Little does he know?
Allot of us are committed
To saving the country
He thinks is dimwitted

And the only dimwit I see is he!
He is leading us into slavery
With his tricky knavery
To his lord and master

Huh this is rude
And makes no sense
We have a red prime minister
Who is more than a little sinister?

Brilliant someone out there rap it!