Occupy Canada and the Silence of the Lambs 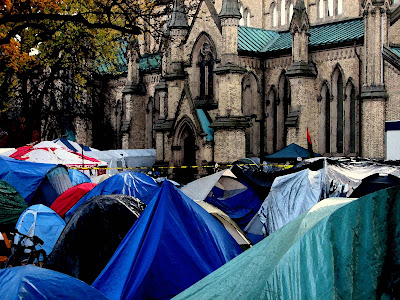 I'm going to miss the Occupy Toronto campsite, this colourful little progressive utopia in the heart of a cold grey city. For by tomorrow night it will almost surely be destroyed. 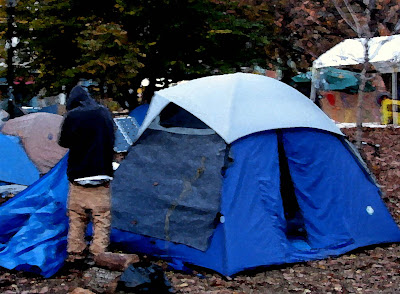 Who along with other marginalized people came to call the camps home.

But like many progressives I also think it's time to move on. Running that camp, and all the others,  is consuming too much energy.

Why do they have to sleep there? Who thinks well when they are tired and sick?They say their camp is their power. I say it's an albatross -- exhausting their reserves and energy, and sparking fights with people they should be engaging.

I believe we need to take our struggle to a new level, and into every neighbourhood in Canada. But I also want to make it clear that those humble tent people have only inspired me, and the only thing that has disgusted me is the reaction of so many other Canadians.

The ones who are howling like a pack of rabid hyenas demanding that the camps be destroyed, and the occupiers beaten, jailed, killed. Or just SILENCED.

In all my life I have never seen such a frothy mix of vile and reactionary comments, and hatred for the young.

This in a country where Stephen Harper and his foul Cons are slowly strangling our Parliament. Torching the planet in the name of Big Oil.

Blowing the rich, screwing the poor. Preparing to take us to war. Again.

Preparing to jail even more Canadians for the "crime"of smoking marijuana, or sharing a joint.

“They tend to be anti-intellectual, anti-science and with little interest in debating the evidence or listening to expert opinion,” says Graves. “Many simply want people who do bad things to be severely punished whether it makes streets safer or not.”

Because let there be no mistake. The Cons and those grubby old zombies are the REAL threat to Canada, not the protesters.And the silence of the lambs is slowly KILLING this country.

Which is why I am with the occupiers eh? Because in the darkness of Con Canada.

Jack Layton where are you??? I miss you.

They refused to be silent, they took to the streets, they made me believe again. 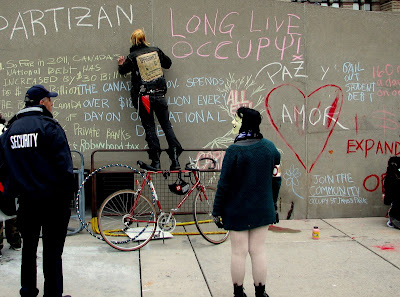 And as I tried to explain last night with my new/nouveau video.

In a cold dark land of the walking dead, they are living life like it should be lived.

Yup. Walk out of your demolished camps with your heads held high, and your drums beating loudly, my gentle occupiers

For this is also my message to you.

Long live our REVOLUTION...
Posted by Simon at 8:47 PM

It is going to be an uphill battle, to say the least! Looks like the dean of the Cathedral is not willing to practice Christian charity here.

But for the occupy movement, overall, it will be an uphill battle,and I do have my reservations.

For openers, Spain just threw their socialist government out and voted in a center right party who promises austerity measures. Despite the fact that austerity has proven to fail in other Eurozone countries around them, the Spaniards believe this Rajoy and his austerity measures will lead them to the promised land.

Here in Canada, where we are now, officially, further to the right than the US is (Americans are slowly wising up)are still in a world of complacent arrogance. It will be hard to shake them.

I remember once upon a time on CJAD's GAng of 4 show, Kimmee Fraser once whined (egged on by her other Harpercon cheerleaders)about how universities were too left winged and how professors were too left winged and graded their students with this bias--that if a student dared to present right winged arguments in a term paper or dissertation, it had to be perfect--right down to spelling, grammar, those 'i's dotted and those 't's crossed, and those arguments better be air tight and backed up heavily. Yes, poor Kimmee was whining that her son had to 'pretend' he was a lefty in order to survive Concordia. Bull, given that Trude the prude Mason and Babs Kay teach there, but anyway...

Remember the argument above. That is exactly how I feel about the occupy movement or any progressive movement or anytime a progressive argues something. It must be airtight, picture-pefect, gaff free, all 'i's dotted and 't's crossed, or we'll continued to be discredited, scoffed at, and/or ignored.

You mentioned missing Jack Layton. I think many do, but while his last message to Canadians of

"“My friends, love is better than anger.

Hope is better than fear.

Optimism is better than despair.

So let us be loving, hopeful and optimistic.

And we’ll change the world.”

is definitely, not the order of the day. Many of us are angry, and if we're not, we should be. Messages of love don't resonate anymore. And this message won't work to counteract thugs like Stevie Harper.

David Fennario, a Montreal playwrite, and die hard socialist who once ran under the Quebec Solidaire banner (he's most famous for the play "Balconville") believes Layton's last words are a recipe for disaster.

Very interesting article. I agree with author that occupation is nothing more than just symbol of this movement. I believe it is more important now to work on structure of the movement, that it can start to demand particular things on government.

hi CK...good comment. But I'm not as pessimistic as you are. I realize that the movement is still a little fuzzy, but it is a global movement, which is important, and if we can get it to connect with the unions and the progressive parties I think we can turn it into a mighty movement for change.
Also, don't underestimate the word "LOVE" as an instrument of that change.
Many young people connect with that and when the Cons mock that it makes them really angry.
Maybe I am too optimistic, but the thought of spending the next four years in a state of helpless rage is too depressing to even contemplate.
And as for David Fennario...
My friends

"Anger is better than fear

Solidarity is better than despair

So let us be angry and hopeful in solidarity

And together we can change the world."

That's fine too. And probably closer to how I feel.
But the way I see it, whatever inspires progressives to unite and defeat the Cons, has got to be good... :)

Hi Elli...yes I agree with you. It's time to stop fixating on the physical occupation of campsites, and move on to occupy the world of ideas, and the instruments of power. As I said in my post, it's just the beginning of the beginning, and if we are clever and creative we can go a long way...