The Night We Taught the Russians Manners 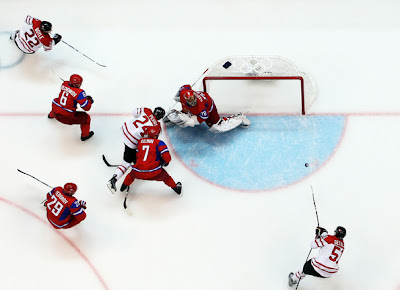 Well up until this morning I was hoping for a somewhat closer game, because I've always liked the way the Russians play.

But then I read this story.

We all know Canada has problems with the future lines drawn on Arctic maps and we all know Canada lives in the shadow of its larger neighbour to the south. The abject cruelty shown by Canadian soldiers in international conflicts is scantily referred to, as indeed is the utter incapacity of this county to host a major international event, due to its inferiority complex, born of a trauma being the skinny and weakling bro to a beefy United States and a colonial outpost to the United Kingdom, whose Queen smiles happily from Canadian postage stamps.

"Maybe it is this which makes the Canadians so...retentive, or cowardly."

And I changed my mind. Because nobody should write when they're that drunk. Or be that rude.

Especially if you come from a fascist, homophobic, backward country like Russia.

Everybody who knows anything about Olympic skating, Winter Olympic sports and international politics will infer from the pitiful and dangerous conditions provided by the Canadian authorities, which already caused one death, that Vancouver is mutton dressed as lamb. Take off the outer veneer and the stench is horrific.

It is a surprise that any Russian athlete would wish to remain in that sort of environment for a second longer.

I say OK no problem. You can send your hockey team home now.

And take this bad loser with you.

Because he REALLY stinks.

I LOVE the smell of mutton in the morning

P.S. I hate it when I see people waving those signs "Hockey is OUR game." Because do the English, who invented soccer, do that when they play the Brazilians? And yahoos give me a headache whether they're Russians or Canadians.

But I have to admit that when we skate, check, pass, and score like we can. And we tell the goons to stay home. We do play it better than ANYONE...
Posted by Simon at 11:49 PM

I love Pravda! You never know what they're going to come up with. It's the journalistic equivalent of a drunk on a street corner pontificating to the world. It's like Worldnetdaily, with vodka.

Hard to believe it used to be the official state newspaper of the USSR.

Did you notice the author of the article?

And it should be pointed out that this Pravda is nothing related to the old Pravda which Yeltsen shut down over a decade ago.

I mean - how much can you take the word of a site which also includes articles on sea serpents and nostradamus?

Ah yes, Pravda. It's the National Enquirer on crack. Read the article. I guess that's how today's Russians lick their wounds.

The guy who wrote that is Timothy Bancroft-Hinchey, a twit from Leeds.

Pravda is not a serious publication.

Timothy Bancroft Hinchey is a graduate from Leeds University--
a redbrick university.

I have a link here and if you look near the bottom, you'll find he's also a self-important person when it comes to describing himself.

Sorta reminds me of Coren, actually.

hi Bruce...I have to admit that was the first time I had ever visited that site, although I had heard about Pravda before.
It's sad , because I'm actually fond of the Russians, and always thought we should have a special kinship because we're a northern people.
But these days all I see is fascism and ugliness...

hi Michael... yes I can see that Pravda isn't what it used to be back in the days of the USSR.
The link you provided didn't work for me, but after doing some googling maybe that's just as well... :)

hi Mound... as I told Bruce I'm very interested in the history of the Russian people. And they have had their glorious moments. So I'm sorry to see the state they're in. They do deserve better...

Pravda is not a serious publication

Yes I'm starting to see what you mean. It's legitimate to criticize the Olympic organizers for many reasons, but comparing it to mutton is ridiculous.

Since I wrote the post I read an article on how difficult it is in these jungle capitalist days to get a team together.
So I also understand a little better how they must feel.

hi Torontonian...Geezus...if you guys keep this up I'm going to have to personally apologize to the whole Russian people.

First from Leeds, then a songwriter, and then this:

One fine day I realized that there was only one way to strive for the truth: to write a true story and to send it to mass media outlets. That’s what I did.”


Oh no. You wouldn't know how to say sorry in Russian do you? :)